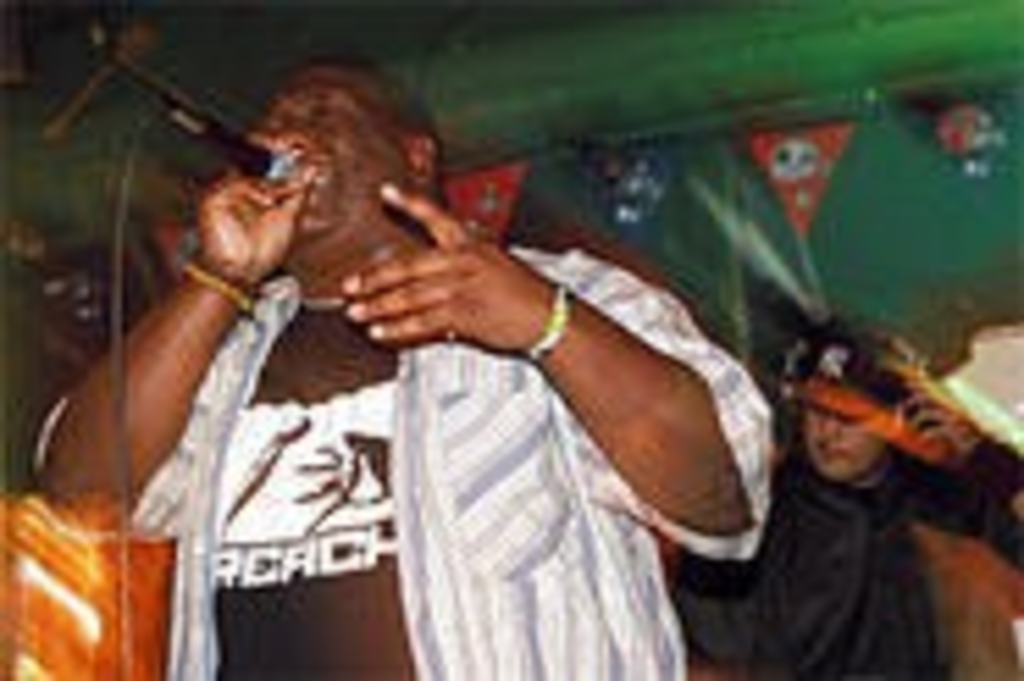 “Comin’ for You (w/ DJ Ataxic)” by Reach, from Joys, Disappointments and the In-Between:

A couple of weeks ago, Stacy Smith stared death in the face. It made him very pensive.

Smith, better known by his MC moniker, Reach, is afraid of flying. But he was about to board a flight to Atlanta to meet up and perform with Big Daddy Kane, hop on a tour bus and hit up spots in New Orleans, Houston and Austin before flying home to KC. It was all part of his prize as Scion’s “Next-Up” competition winner, for his song, “Comin’ for You.” Names like the Big Bopper had him worried. Stars like Stevie Ray Vaughan, Otis Redding and Aliyah.

“It’s just the odds of surviving a plane crash,” he told the Pitch a few days before boarding call. “I saw a commercial for Lost on TV, and I was like, this is not what I want to see two days before I get on this plane.”

The idea of an impending fiery demise must have had a profound effect on Reach’s thoughts, because he started dispensing wisdom like a streetwise Buddha. For instance, he offered the Pitch some insight into the downtown redevelopment and its effect on local hip-hop.

“I think the downtown revitalization will polarize the scene,” he said. “I don’t think that project includes hip-hop. I don’t think there will be venues open to us performing down there. I see us kind of moving back south, further to Westport. Once they get this entertainment district going, I think the way for other hot spots for nightlife to stay afloat is to be open to something other venues aren’t offering. And that thing is live music. They’re going to have to open their doors back up to these musicians.”

He also waxed philosophical about the divide in the local scene between so-called backpackers and gat-packers. The local forum HipHopKC.com recently blew up with posts debating whether the two sides of hip-hop could coexist. Reach insists on looking at the bigger picture.

“Not so long ago, there used to not be those dividing lines,” Reach said. “The best example was Club Mardi Gras [a spot near 18th Street and Vine] in early 2000. On any given night, you’d see Tech N9ne and Mac Lethal and Approach and Grant Rice all at the same venue. Everyone felt at home. I think the only dividing line was in terms of your quality as an artist. If you were good at it, you were there. Somehow, we’ve lost our way with that.”

And he was able to rationalize the somewhat-perilous situation facing fans of the Peanut downtown, Kansas City’s Sunday night home for hip-hop. Recently, managers there have threatened to put an end to Hip-Hop and Hot Wings if its fans don’t stop defacing the bathrooms with marker graffiti. Reach shrugged it off. “I’m certainly not looking for the demise of Hip-Hop and Hot Wings, but it’s not about a brand or a place or a night. It’s about the people. Hip-hop has never needed anything to enable it, anyway. When it started out, it was out in the park. If it has to go back to that, it can and it will.”

A few days after doling out these words of wisdom to the Pitch, Reach found that his flying fears were groundless, and his plane got him safely to Atlanta. (He was comforted by the presence of DJ KIZ-One, who turned out to be more afraid of flying than he.) Reach’s adventures with Big Daddy Kane can be found on his tour blog, at www.myspace.com/reach.

His hard work won’t stop when he makes his return. In April, he will release an album, tentatively titled Brilliant Corners (after a Thelonius Monk record), which he made with the help of a producer named 12 Beats from Copenhagen, Denmark. He also has a mix of 20-odd songs that he’s shopping to some labels, but that project is hush-hush for now.

Next up, Reach steps off the plane from Austin to headline Hollapalooza, a three-day festival of local hip-hop. It starts at the Record Bar Friday, where he performs with the Soul Servers and Jacksonville, Florida’s Simple Complexity. The next night, he’ll premiere his “Comin’ for You” music video at the Creative Mind Arts Center at 3109 Troost. Finally, he’ll be at the Peanut for Hip-Hop and Hot Wings, with Kev Brown and Oddisee from Washington, D.C., and regular Peanut DJs Ataxic, Beatbroker and Miles Bonny on the decks.

You wonder how the guy even has time to think.