On the KCK school board, new arrivals and a slide into mistrust and mismanagement 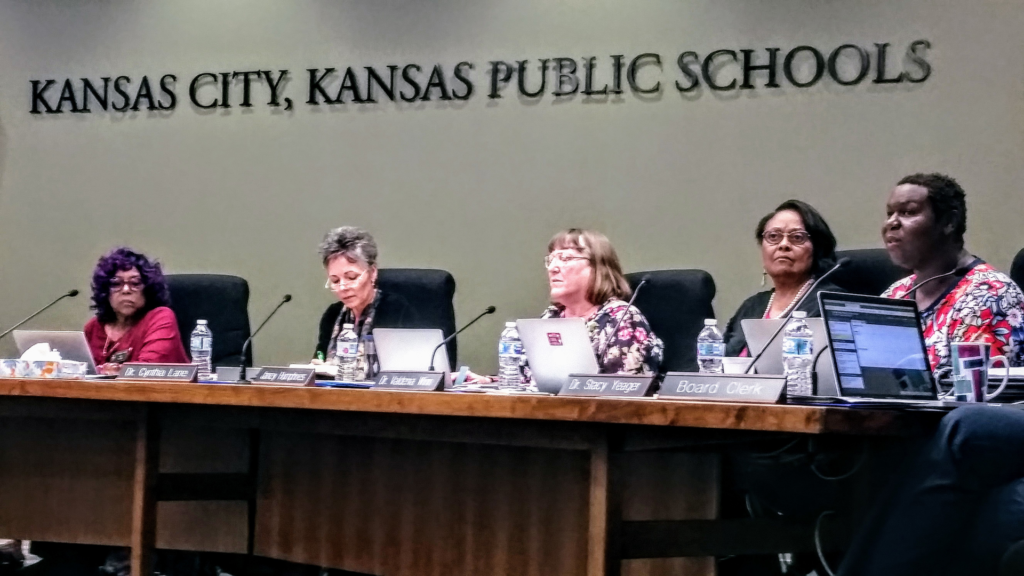 While parents and teachers beamed from the audience, a parade of student scholarship winners from Kansas City, Kansas Public Schools introduced themselves at the May 8 meeting of the board of education.

Their names and faces reflect the district’s diversity. Some of the graduating seniors began their journeys in Mexico, El Salvador, Myanmar, Nepal, and other foreign lands. Many are the first in their families headed for college, bound for schools like Park University, Kansas State University, Donnelly College, and UMKC, with plans to become pharmacists, accountants, and entrepreneurs.

The ceremony was a tribute not just to the students but to a school district that for years has educated the children of immigrants and low-income families with professionalism and praiseworthy outcomes. Across the state line, patrons of Kansas City Public Schools have long envied the KCK district for its administrative stability. While the Missouri school district was until recently known as a revolving door for superintendents, KCK Public Schools — often referred to by its formal name, Unified School District 500 — has welcomed just three new superintendents over the last 20 years. School boards mostly stuck to policy and avoided meddling. Capable administrators felt appreciated and enjoyed long careers. The district’s biggest challenge has been exterior: the perennial uncertainty regarding funding from the state of Kansas.

The absence of internal drama — unusual in an urban school setting — has served students well. With help from partnerships with businesses and colleges, the district has coalesced around Diploma Plus, an initiative focused on helping every student graduate with either a year’s worth of college credits, an industry-approved credential or internship, acceptance into the military, or a minimum ACT score of 21.

But as the KCK school district prepares for the retirement of Superintendent Cynthia Lane on June 30, its long run of tranquility is skidding to a halt.

School district watchers pinpoint the election, three years ago, of current board vice president Valdenia Winn as the start of the slide into mistrust and mismanagement. Winn’s modus operandi has been to delve into aspects of school district administration that stray far from the board’s policy-making role. She has asked to look at the personnel files of staffers in the district’s human resources department. She’s sought information on district contracts of less than $20,000, which can be enacted with the superintendent’s signature. She’s even demanded an accounting of discretionary funds that principals use in their buildings — pizza for math night, for example.

Tensions over Winn’s micromanagement ratched up considerably in January, when four new faces joined the board. None of the four — Harold Brown, a businessman; retired teachers Maxine Drew and Wanda Brownlee Paige; and Stacy Yeager, a business consultant — had been seen at a board meeting before. And all were aligned with Winn. Their faction of five now enjoys a majority on the seven-member board.

What do they want? Consider the May 8 board meeting. The good feelings evaporated as soon as the student honorees left the room. For the next two hours, staffers sat stone-faced while board members peppered them with questions that dissolved into minutia. A resolution surfaced: Winn and her cohort wanted to hire a consultant to “give an evaluation of the [administration’s] upper tier.” Exactly how such a process would work, how much it would cost, or why it was needed, was left unclear.

“I don’t understand,” said school board president Brenda Jones, who seemed blindsided by the measure.

It didn’t matter: Winn’s majority had clearly consulted on the matter prior to the meeting. They voted to create a committee to work out the details.

Winn, 67, is a busy woman. She is a professor at Kansas City Kansas Community College, and she’s been a member of the Kansas House of Representatives since 2000.

In an interview, Winn tells The Pitch that she’s inquisitive by nature. 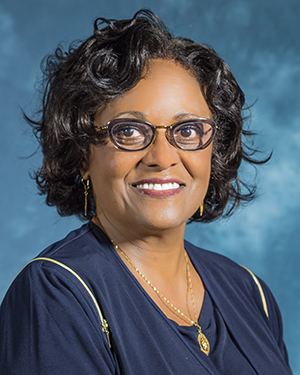 “My style is to question,” Winn says.  “You have new members on the board with a different sense of inquiry. This is what I would say to the naysayers: stop looking for the monsters. We are navigating a very complicated organization and we want to do it properly.”

Janey Humphries, who often votes with Jones in opposition to Winn’s bloc, sees the dynamics differently.

“The majority of our board members don’t really understand what the role of the school board is,” she says. “We are there to set policy. Boards should not be micromanaging. We can’t constantly second-guess our staff and require them to answer the same questions over and over.”

Winn maintains — correctly — that a certain amount of board skepticism is healthy for an organization. But some of the lines of inquiry she and her allies have been pursuing are unnerving, especially to those familiar with the damage that school-board meddling has wreaked upon Kansas City Public Schools and its students.

Case in point: her interest in USD 500 hiring practices and the scrutiny of the human resources department. Winn’s board faction wants to see more black employees hired as teachers and for other jobs. “Why can’t we have more people who look like us?” members have asked at meetings.

Black students make up about 30 percent of the district’s enrollment of 22,000 students. Latino students account for about 50 percent. The remaining 20 percent of students are Caucasian, Asian, and a medley of other ethnicities. Winn says she doesn’t think the district works hard enough to hire black or Latino teachers. And she says “taxpayers of color” are inadequately represented in hiring.

“There are professionals in the community that can’t get hired,” she says. “We need to respond to that, because this is a majority minority district. “

The administration is preparing a report on teacher hiring practices. But USD 500 is hardly the only district to find black and Latino teachers in short supply. Hiring qualified teachers of any race is a challenge for most districts in the metropolitan area and throughout the state of Kansas.

USD 500 is also likely to face a board-inflicted challenge staffing classrooms with substitute teachers next school year. Since August 2016, USD 500 has contracted with Morgan Hunter Education, a firm that recruits, screens, and trains prospective substitute teachers. In that time, the rate of finding substitutes for absent teachers in the district has improved from 76 percent to 92 percent. The firm more than doubled the pool of available subs. And it saved the district about $300,000 a year.

But all that wasn’t good enough for Winn and company. In February, the board voted 5-2 to not renew the Morgan Hunter contract. Winn led the charge, contending she’d talked to a number of parents and board members in the Shawnee Mission School District who were dissatisfied with their substitute staffing service.

There was just one problem with Winn’s argument: Shawnee Mission doesn’t even use Morgan Hunter.

Despite this flawed logic — and despite hard numbers showing that bringing substitute-teacher recruitment in-house would cost the district money and reduce the pool of available subs — all four of Winn’s new board acolytes lined up behind her and voted to nix the contract. (Humphries and Jones, the board president, wanted to extend it.)

“At the end of the day, it was a desire to be more family-oriented, bring the operation back in-house, maybe we could be more effective at building relationships with substitute teachers,” Winn tells The Pitch.

But Winn’s eagerness to heap more work upon the district’s human resources department hardly squares with her frequent criticisms of that operation.

When I ask what credentials she’s looking for, Winn says something vague about membership in appropriate professional organizations.

“I’m going to ask for credentials in every department, because that’s how I do discovery,” she says.

I point out that verifying employees’ credentials is typically the role of management.

“It probably is,” Winn agrees, “but when I ask about them, for discussion purposes, you would think that would be something they would proudly parade.”

A sense of apprehension has settled over the administration as Superintendent Lane’s retirement draws near.

“I really want to leave knowing that the board is in a good place,” Lane says. “I see myself trying to help them see their place in policy and governance.”

But, she says, “I think people are confused. They often feel criticized.” 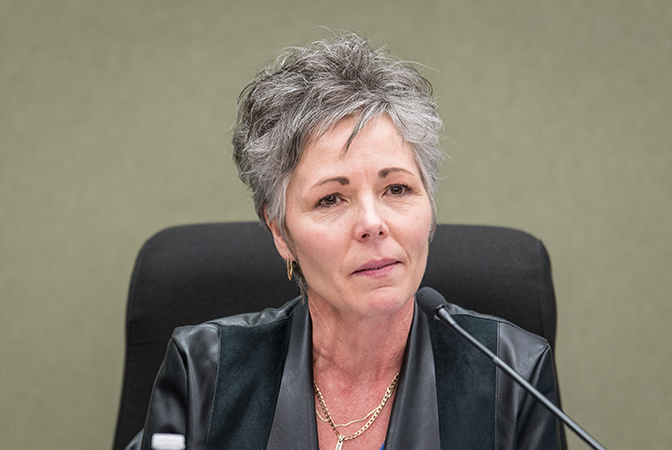 Lane’s retirement was in the works before the dynamics of the board changed so dramatically in January. She has worked in the district for 30 years, as a teacher, principal, administrator and assistant superintendent. She took over as superintendent eight years ago, following the retirement of Jill Shackleford, who had replaced Ray Daniels in 2005. Those three superintendents created an exemplary 20-year chain of home-grown leadership.

But no one knows what’s coming next.  The board is woefully behind on its search process. A consulting firm is lining up candidates for interviews in June for a job that will begin July 1.

Nearly everyone agrees Lane’s team includes highly qualified administrators. Assistant Superintendent Jayson Strickland, the name most often mentioned to succeed her, was one of two finalists for superintendent of the Lawrence School District a few months ago. But district supporters are fearful that the turmoil on the board will run off talented internal and external candidates.

“The board has shown that it is interested in micromanaging many aspects of the administration,” says Sally Murguia, who sent two children through USD 500 schools and still volunteers in an elementary school. “That creates an environment that will make people not want to work here.”

Murguia served on a citizens committee that crafted a plan for a $235 million no-tax-increase bond issue that district voters passed in 2016. She and other members of that team have created a Web site, effectivekckschoolboard.com, on which they report on board activity.

“Having seen other districts in the metro led into dysfunction over the past decades, it is disheartening to see this board dismantle all the forward progress of the KCK Public Schools,” Murguia wrote after the May 8 meeting.

She was especially troubled by the board’s curious resolution to hire a consultant to examine the structure of upper management.

“What is their concern?” Murguia asks. “And why can’t we work on the concern rather than dismantling the entire district?”

Winn is vague about her desire to retain a consultant.

District policy, as well as Kansas law, allows superintendents to make purchases and enter into contracts of less than $20,000 without board approval. Winn knows this, but she has asked to look at Lane’s spending anyway.

“Is there an opportunity to tie a contract to a community organization, or a business?” Winn says. “We have some local businesses here that probably don’t do business with the school district because they haven’t known there’s an opportunity.”

I listen to Winn’s explanation with a sinking feeling. It takes me back to the bad old days when Kansas City Public Schools was looked to as a jobs program and a handout to businesses and groups.

The mission of a school district is to educate children and prepare them for a future in a complex world where a simple high school diploma is rarely enough. It is not to enhance the standing of board members in their community, find jobs for their friends, or provide contracts for their churches or favorite businesses.

“I think what worries me the most is the instability,” Lane says. “We all have seen the struggles that occur when an organization loses focus on its main purpose.”

We have. And it’s a grim future to envision for public schools in Kansas City, Kansas.