On the Flip Side 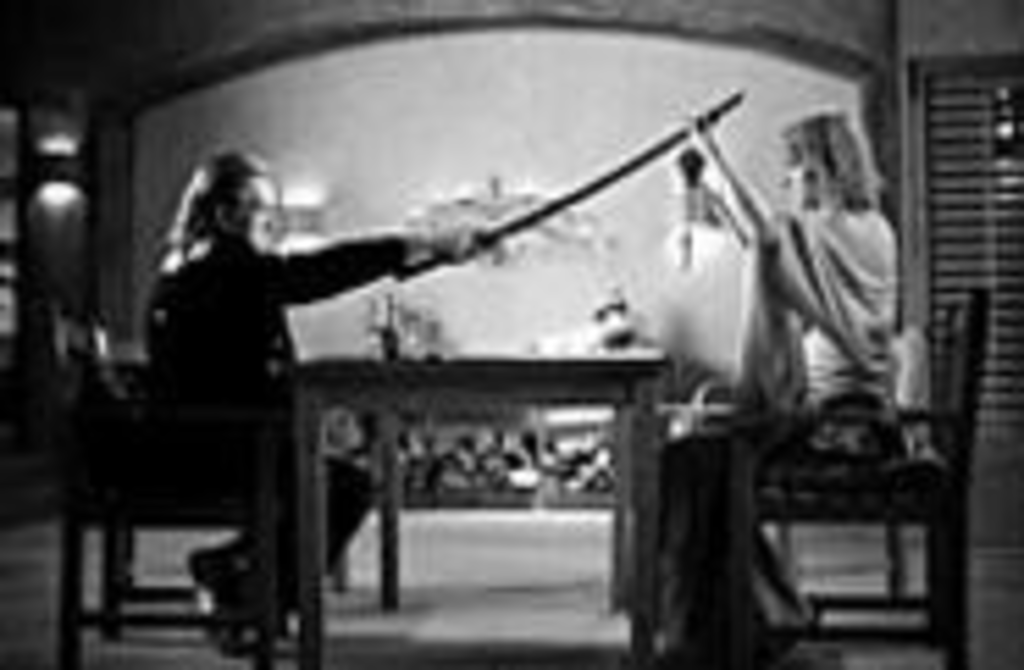 The six-month intermission is over. Those of you left in the lobby, wondering if Uma Thurman ever did kill Bill, may now return to your seats, unbuckle your belts and resume your gorging. Rest assured that Kill Bill, Vol. 2, the second half of Quentin Tarantino’s fifth movie, offers just what you expect. It’s a continuation bereft of real revelation, a finale that’s been withheld from you only because Miramax wanted to double its receipts. Thurman’s Bride, shot in the head and left for dead by David Carradine’s Bill at the opening of the first “volume,” has resumed her “roaring rampage of revenge.” Lucy Liu’s O-Ren Ishii and Vivica A. Fox’s Vernita Green have been eliminated. Remaining, though likely not for long, are Michael Madsen’s Budd, Daryl Hannah’s Elle Driver and, of course, Bill.

Would Kill Bill have been better as one movie? It certainly would have been a longer one. Vol. 2 alone, with its endless chitting and chatting between Thurman and Carradine and Thurman and Madsen and Madsen and Hannah, feels bottomless even before you get to the two rounds of end credits. The first one, with its protracted fight sequences and gallons of gore, was exhausting; this successor, in which everyone left alive explains what happened to the intended and actually dead, is exhaustive. Together, they could make you a little groggy.

But they need each other to survive, like the two Captain Kirks in that Star Trek episode in which the transporter splits him in half. One Kirk is soft and incapable of command; the other lusts for blood and is incapable of rational thought. Separated, they’re useless. United, they’re the best starship captain in the fleet. (Lest you think this comparison a bit, oh, geeky, consider that Tarantino credits the epigram for both Kill Bills — “Revenge is a dish best served cold” — to an “old Klingon proverb,” from Star Trek II: The Wrath of Khan. What are Tarantino movies if not geek pornography?) The first Kill Bill was nothing but violence — swordfight upon swordfight, the clanking of steel blades drowning out anything anyone said. The second is its emotional counterpart, the heart without all the blood drained from it and poured onto the floor.

The opening scene, set at the El Paso chapel where the Bride and her wedding party were massacred by Bill and his Deadly Viper Assassination Squad, sets the tone. We see, in black-and-white flashback, the events that set the movie(s) in motion: The Bride and her husband-to-be (Chris Nelson) and their small group of friends are chatting with the minister (Bo Svenson, speaking of flashbacks) about the next day’s ceremony. Samuel L. Jackson is there, too, behind the piano. (It’s a nifty cameo — it was Jackson who referenced Carradine’s Kung Fu Caine in Pulp Fiction.) Then Bill shows up to confront the Bride about her decision to leave him for a gig in a used-record store. During their brief, tender tête-à-tête, you feel their history together. Their small talk has big consequences, not least because you know what’s about to happen — he’s going to shoot her in the head. Tarantino, bless him, even has the restraint to pull out of the chapel before the shooting starts. For once, he’s less concerned with the carnage than with the aftermath.

Eventually, we’re left only with Bill and the Bride, for whom love and hate have become the same thing. Carradine, portraying Bill as a calm and charming killer, could just as easily kiss this woman as kill her. Perhaps theirs will end up as an inevitable union, bound by the daughter he’s raised in the Bride’s absence. Perhaps not. Carradine, heard but not seen in the first movie, gives Vol. 2 a warmth and dignity its predecessor lacked. We come to understand his motives as well as we comprehend the Bride’s. Their destinies are intertwined, like these two movies that can’t exist without each other and shouldn’t have had to.