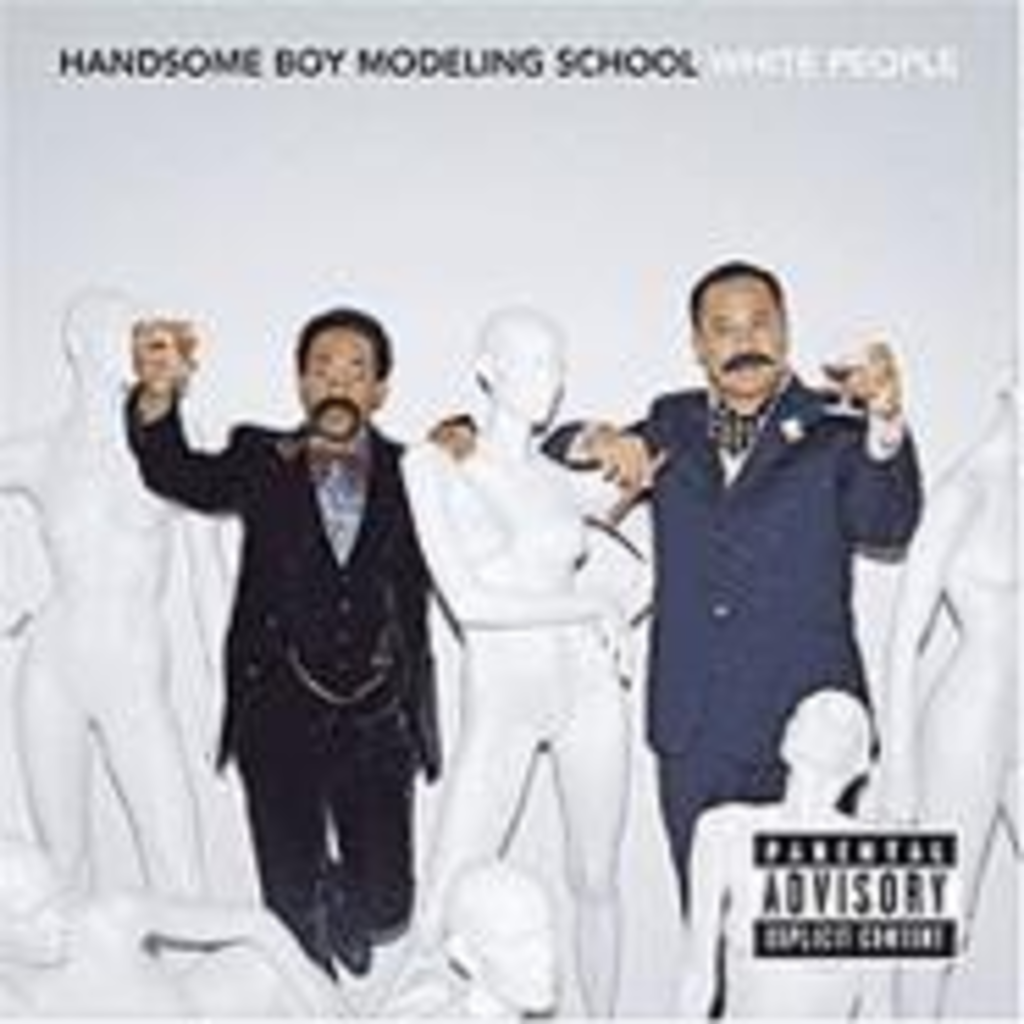 Everyone knows all of Usher’s Confessions by now; everyone went to see Prince play “1999” for the very last time. Everyone knows all about Lil Jon and his penchant for hollering “Yayy-uuhhh!” With everyone paying attention to these superstars, a lot of other talented folks got drowned out, and not just Brandy. (She came out with an album this year! No shit!) So here’s a look at those artists — and a set of remarkable, distinctive albums that too often got overlooked. Just think of them as the Nineteen Great Black-Music Albums You Probably Didn’t Know Were Out There.

1. Handsome Boy Modeling School, White People (Elektra/Atlantic). Plenty of rappers say they don’t give a fuck. Well, here you have an album by two guys who actually show you they don’t give a fuck. Prince Paul and Dan the Automator slip back into their roles as Handsome Boy Modeling School instructors Chest Rockwell and Nathaniel Merriweather, dropping an audacious album that manages to mix and match, more or less seamlessly, the diverse talents of guests Cat Power, RZA, Pharrell Williams, the Mars Volta and John Oates. The result is one beautiful, genre-busting collection. Leave it to Paul and Dan to create an album that makes everybody else in the music business look cowardly — and dumb, for not trying anything as ballsy as mixing and matching the mustachioed midget from Hall and Oates with Cat Power’s mesmerizing neuroses and the Mars Volta’s mighty Mexi-‘fros.

2. The Foreign Exchange, Connected (BBE); Murs, Murs 3:16: The 9th Edition (Definitive Jux). Last year, hip-hop trio Little Brother dropped The Listening, which is destined to be a classic. (Too bad only a few people know about it.) While the world catches up, the Little Brother boys tinkered with side projects. MC Phonte hooked up with Dutch producer Nicolay to form the transcontinental duo the Foreign Exchange, and the result was the stylish, sensuous Connected. Meanwhile, in between producing a slew of artists, Little Brother DJ/producer 9th Wonder worked closely with Def Jux MC Murs on a mischievous new album that proved that collaborating with 9th Wonder can only be, well, wonderful.

3. Raphael Saadiq, Raphael Saadiq as Ray Ray (Pookie); Amel Larrieux, Bravebird (Bliss Life). Former Tony! Toni! Toné! frontman Raphael Saadiq went into Superfly mode on Ray Ray, dishing out the kind of soul-stirring funk that makes you wanna spray Febreze all over your place after playing it. On Bravebird, onetime Groove Theory vocalist and fellow old-school soulster Amel Larrieux put her own distinctive stank on boho-soul numbers that enrich the mind and soothe the spirit — not to mention tingle the bathing-suit area. Even if, in her case, it’s probably a one-piece.

4. Aya, Strange Flower (Naked Music); Van Hunt, Van Hunt (Virgin). While veteran performers Saadiq and Larrieux made exemplary followups, a couple of new kids also jumped in the neo-soul pool. Larrieux sound-alike Aya laid her breathy vocals all over mesmerizing trance numbers and delivered a debut album that’s exotic, moody and intensely carnal. Van Hunt didn’t quite bring it like that, but the Rahsaan Patterson collaborator did come up with an album that balanced falsetto-laden grooves with guitar-drenched energy. If there’s one dude who could be described as the talented, mutant spawn of Curtis Mayfield and Shuggie Otis, it’s this guy.

5. Amp Fiddler, Waltz of a Ghetto Fly (Pias America); Omar, Best by Far (Spun). Amp Fiddler and Omar created smooth-as-silk soul albums that are probably bumping in every so-called pimp’s ride as we speak. These guys don’t even have to talk the game; their music alone could serve as an appendix to the Introduction to Mackology textbook. Detroit boy Fiddler’s debut was a full-length-fur-coat-clad delight, thanks to Motor City music men George Clinton, John Arnold and J Dilla, who popped in to help him craft diamond-in-the-back ditties. And for all those boho “indie” pimps out there, forever-under-the-radar vocalist Omar came like the alternative mack daddy the Brits have always known him to be.

6. Jean Grae, This Week (Babygrande); Gift of Gab, 4th Dimensional Rocketships Going Up (Quannum Projects). Can someone explain why these two wordsmiths haven’t blown up like Elastigirl’s ass yet? Jean “Jeanius” Grae continued to dazzle listeners with her voracious, clever wordplay on her third effort, and Blackalicious MC Gift of Gab was equally agile on his solo debut — where, among other things, he put the theme to Welcome Back, Kotter to much better use than Mase.

7. Adriana Evans, Nomadic (www.adrianaevans.com); Eric Roberson, Eric Roberson Presents the Vault, Vol. 1.5 (www.ericrobersonmusic.com). These two indie-R&B singers are pretty far underground; you may have to hit the web to find their rewarding sophomore efforts. On Nomadic, Evans’s first album in four years, the ol’ girl resurfaced with versatility, confidence and, most of all, joyfulness. Meanwhile, singer-songwriter Roberson tinkered with a “demo” album, taking out some songs, throwing in some new ones, adjusting the seasonings and coming up with a tasty collection that’s hard to stop feasting on.

8. Cee-Lo, Cee-Lo Green Is…the Soul Machine (Arista); Wale Oyejide, One Day…Everything Changed (Shaman Work). When his second album came out earlier this year, critics were ready to anoint former Goodie Mob MC Cee-Lo as the next god in the ever-influential Atlanta hip-hop pantheon. But when that album failed to achieve OutKast-sized success, they went back to championing OutKast. Lost amid all the critical posturing is the fact that Soul Machine is easily Cee-Lo’s best work. Old-school funk melds with party-starting hip-hop, and the alloy that emerges is, well, something different. Which is also a perfect way to describe the latest from MC/vocalist/producer Wale Oyejide (aka Science Fiction). Bouncing from heavily conscious hip-hop to daydreamy soul, Oyejide’s album is revolutionary in every sense of the word.

9. King Britt, On the Seventh: Park Hyatt Chicago (Milan); GB, Soundtrack for Sunrise (Sound in Color). King Britt’s On the Seventh is a lush compilation featuring cool, euphoric music from the likes of Vikter Duplaix, Spacek frontman Steve Spacek, Clara Hill and the masterful Britt himself. Spacek also finds his way onto GB’s debut mix, a tight collection of sounds that includes guest work from Flora Purim, Airto Moreira, Joy Jones and A Race of Angels. When it comes to mix CDs from master DJs, it isn’t about the person mixing; it’s about the music they mix.

10. Various Artists, Giant Step Presents Simply Good Music, Volume One (Giant Step); Various Artists, True Notes, Vol. 1 (Okayplayer). Prefer to sample the aforementioned artists before plunking down for full albums? These two compilations are a good place to start. Aya and Amp Fiddler appear on the Giant Step collection, which also features downright decent tracks from Esthero, Jiva, Sara Devine and Zap Mama. Jean Grae, Gift of Gab, Nicolay and Little Brother contribute tunes to Okayplayer’s True Notes volume, which also features cuts from the Roots, Skillz, Dilated Peoples and RJD2. Go ahead and get your feet wet with these kiddie-pool discs, but don’t be afraid to take the plunge into the deep end.