On the difficulty of sharing pro-abortion stories in the Heartland 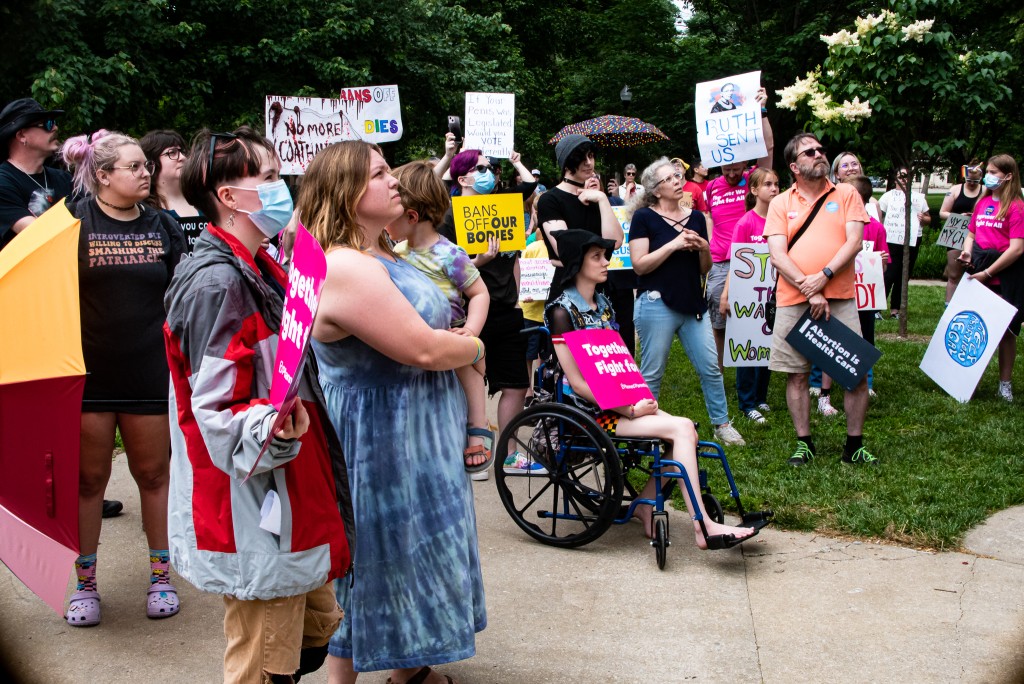 Lauren Conaway didn’t expect to see her abortion on the news.

Conaway, founder and CEO of InnovateHER KC, had planned to give an interview about the Supreme Court’s leaked Roe v. Wade decision impacting women entrepreneurs. But as the interview went on, she unexpectedly shared her abortion story.

Later, as she watched her story on TV, she started to panic. “KSHB, that’s the news. I didn’t know what people’s response would be. People are murdered for administering abortions.”

With Roe v. Wade on edge, more personal stories of abortion are emerging in rallies, talk shows, podcasts, and interviews. For folks who speak out, the spotlight may not capture a profound personal journey of storytelling itself—and that’s a lost lesson, both for future storytellers and for organizers.

“What nobody checks on is what happens after people share stories,” says Justice Gatson, director of Reale Justice Network, a longtime organizer for maternal care and reproductive justice. “The range of personal emotion ranges from super-happy, almost giddy, and for others, it was a hard decision.”

Abortion stories are masterful tools for social change because they do what memes and headlines can’t: Open minds to new understanding, spark deep conversations, and change narratives.

“The power of storytelling is incredibly profound,” says Kelsey Walker, an author, coach, and advocate for people experiencing the stigma of abortion as well as the grief of child loss. She shares her story and resources at FromTheGreenDesk.com

“What I’ve found by telling my story is that people are shocked by it,” says Walker. “But after the initial shock, there’s a resolve and an acceptance that you don’t see from anything other than being vulnerable and telling your story.”

“Storytelling and sharing our experiences is the only way for people to gain any sort of insight and understanding,” says Kristen Thomas, a Kansas City resident, writer, and clinical sexologist who has shared her mother’s abortion story.

Thomas vividly remembers her mother’s near-fatal ectopic pregnancy. As her mother lay in a pool of blood at home, she begged Thomas, a child at the time, to call for lifesaving help. Ectopic pregnancies can cause deadly internal bleeding if the embryo isn’t safely aborted.

Thomas grew up a pro-life conservative Christian, and she hopes her mother’s story can change stereotypes about people who need abortions. “I can show that these aren’t just heathens who believe these things, these aren’t people who have had no guidance. I owe it to this community growing up here to be very vocal and use what platforms I do have so we can have some conversations.”

For some, opening up to family is a tough part of the journey. Walker, who published a book about her child loss, abortion stigma, grief and PTSD, held what she calls a “truth tour” with extended family before her book launched. She and her husband both come from conservative Christian families, and she was fearful of rejection.

“For four years, we kept everyone in our family in the dark that we had an abortion, though they knew we lost a baby,” says Walker, a mother of two.

In her book, Walker shares her excitement to learn she was expecting a daughter, whom she and her husband named Hope. Later they were devastated to learn that the fetus developed a condition that caused its bones to shatter. An ultrasound crushed its skull, and it began posing a risk to Walker’s safety. Walker and her husband grieved their loss and sought cremation and church services to bless Hope’s ashes. But because Walker’s child loss included an abortion procedure, church after church—seven in all—refused to help.

As Walker opened up her story to extended family, she and her husband learned “our fear and anxiety was only perceived. It wasn’t true. They were very supportive of what we felt was the next step in the healing process, which was finding meaning.”

For folks considering telling their own stories, whether to family and friends or larger audiences, storytellers say there are no timelines and no right or wrong answers other than what feels safe.

“Women should have the autonomy to share their own stories or not,” says Conaway. “I don’t think it is possible, wise, or safe for every woman out there to share their story. We are not at a point where women are able to share freely without consequence.”

“Please know you’re not alone,” says Cassie Driskel, co-founder of Without Us Strike, co-organizer of the Mother’s Day Reproductive Rights Rally, and a longtime advocate in rural communities. “If you don’t have anyone in your personal bubble you feel safe telling, reach out to safe abortion groups or spaces. We Testify specializes in being a space for people to share their story. Hell, reach out to me! I’m here!”

Storytellers acknowledge that stigma and shame can make it hard to speak up, even when it’s safe to do so. Walker, who has shared her story many times in speeches and interviews since launching her truth tour, urges storytellers not to get wrapped up in irrational fear. “A lot of the perceived shame and guilt around having an abortion is just that—it’s only perceived. It’s not necessarily what’s going to happen,” she says.

Storytellers say there is room for allies in community conversations—and allies are needed. “We need more men speaking up,” says Thomas. “The men out there who are staying silent right now, who aren’t calling their senators, who aren’t posting about treating abortion like health care, we need you guys to be speaking up right now.”

For folks who create platforms for stories, such as rallies, websites, or special events, stories step in where mainstream culture stops. “I wish that there were more mainstream stories about the lifesaving care of abortion, but you’re not gonna see that,” says Thomas.

Rallies have become powerful catalysts to disrupt stigma and silence around abortion. “For me, I share my story because I would go to rallies and hear women who are so brave and they would share their story, and I would always feel shame,” says Conaway. “I always felt that by not owning my choice and my stake in the matter, it was a lack of integrity. That’s at odds to who I want to be.”

Gatson says white-led groups in particular have a responsibility to create safe spaces for storytellers, build non-transactional relationships with BIPOC-led groups, and center folks who are closest to the problem. This can help white-led organizers think and act more inclusively and accurately about the issues at hand, and ultimately align efforts more effectively.

Gatson also says BIPOC and LGBTQ communities are already at a disproportionately higher risk for reproductive health complications and maternal death, and that gap will grow larger should Roe fall, so this moment in history calls for more stories from these communities. But organizations must invest in genuine, non-transactional relationships with communities long before a story is requested.

“You have to start there. There is no other way,” says Gatson. “You have to take me on a first date. You cannot just think we’re gonna get to the business. Especially when we’re talking about my personal private situation. Because I need to feel good about how this ends.”

Gatson has seen storytellers traumatized after stepping forward, and organizers should be prepared to provide care for trauma responses. When an organization also seeks to claim ownership or full rights to story content, it can dissuade storytellers from coming forward because they lose ownership and don’t know how their stories could be remixed, repurposed, or taken out of context.

After the TV interview

Conaway’s abortion happened years ago, when she was in her 20s. She was struggling at the time, had no savings, and was on the pill. She wasn’t ready to have a child, and her abortion provided relief (read more in CatCall Magazine). But after sharing her story on TV, she feared backlash.

She watched for reactions online. A couple of article comments called her a baby killer. “I commented back on one of them, then realized this was not gonna end up in a productive conversation, so I stopped.” Feedback was mostly positive. She got DMs from friends who opened up about their own abortion stories. “It makes me feel better about my own. It makes me feel like I’m not alone.“

For many storytellers, their journeys stand in sharp contrast to a toxic silence: Even though most Americans support abortion and it is commonplace (nearly 1 in 4 women will have an abortion before their 40s), open and healthy discussion about abortion is rare. Most people don’t know how to talk about it.

“Someone will come up to me and say, ‘I saw your story on the news, thank you,’ but there’s that look [on their face] like they don’t know what to say,” says Conaway. “We have to move past that. Women should be able to tell their story without shame, without fear. The only way we’re gonna get there is to come out and provide that roadmap on how to come forward.”