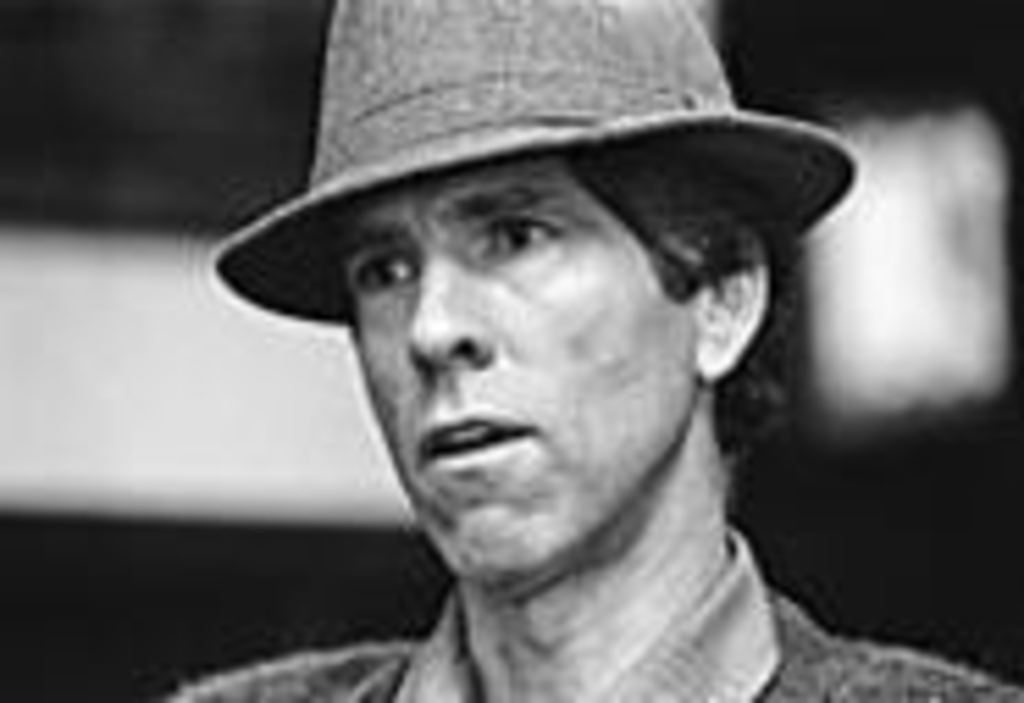 Comedian Chris Rock has a very funny routine called “Upside Your Head.” In it the “perp” takes a number of people hostage in an office, creating panic as to who will get hit upside the head. The essence of the joke is that sometimes a person gets so frustrated with others’ idiocy that he loses all control and goes on a rampage, smacking people in the hopes of knocking some sense into them.

After last Tuesday’s election, a lot of people may want to capture Clay Chastain and deliver him an “upside your head.” Only the squeaky journalist voice in my head keeps me from being one of the many with that compulsion. Yet that same voice compels me to talk with Chastain whenever he begins a quest to knock city officials upside their heads with another initiative petition — and to revisit him when that effort misses its mark.

I support light rail. I find it irrational not to. Only the most narcissistic culture would ignore its responsibility to the future, giving no thought to the prodigal consumption of limited land and oil resources for what amounts to instant gratification. Maybe it takes a Chastain to remind us of that, and we know it. How else can you explain his success in getting enough signatures to place a string of initiatives on the ballot three years in a row?

But if some people have recognized his vision, many haven’t accepted his leadership. Chastain can’t get that fact through his head. That’s why he keeps coming back. And ironically, because there is no other light-rail leader with the same level of commitment, Chastain has a reason to keep coming back. “No one will challenge the establishment after me,” Chastain told me a few days after his November 7 initiative lost with less than 40 percent of the vote.

But what Chastain seems unable to understand — maybe without something upside his head — is that a lot of people don’t care about challenging the establishment. They just want light rail built.

The argument that the establishment doesn’t want light rail evaporated when The Kansas City Star endorsed Chastain’s 1999 sales tax proposal (it included money for capital improvements). The newspaper took a chance, perhaps miscalculating the extent of public support by basing its editorial decision partly on the fact that Chastain’s 1998 proposal had earned 45 percent of the vote. More likely, however, was that the newspaper wanted to keep the light-rail process going despite Chastain’s follies. The newspaper’s endorsement spurred civic leaders to begin thinking about putting something on the table.

Also, in a way, the endorsement attempted to undo the damage done in 1997, when then-mayor Emanuel Cleaver condemned the Area Transportation Authority’s midtown light-rail plan as “touristy frou-frou” and called the ATA Board “pitiful.” Doing the bidding of Broadway/Westport property owners and echoing the protests of businessmen James Nutter and R. Crosby Kemper, Cleaver shifted the light-rail issue to the Chamber of Commerce. From there it became more of a business deliberation than a public transportation consideration. The ATA never stepped back into a leadership position on light rail. Into that vacuum stepped Chastain.

Chastain knew what he was doing. And though he tried hard to fill a leadership role — making a second run for mayor in 1998 and floating three light-rail petitions (1998, 1999, and 2000) — he couldn’t pull it off. His personality — his ego — kept re-creating that vacuum. It prevented him from accepting any role other than one he could keep all to himself. When Warren Erdman and other members of the Central Business Corridor (CBC) made overtures to Chastain earlier this year, asking him to join forces to formulate a light-rail plan, Chastain refused. The CBC wanted Chastain to give up the petition effort — the one thing of power he had.

“I never got a phone call from anybody,” Chastain says. “When we started the petition effort, that’s when I got the phone call. The catch was that we would have to cancel the petition drive. When I said no, they never called again.”

Chastain says he wanted his initiative on the presidential-election ballot. He was convinced the large turnout could guarantee a victory. Short of that Chastain couldn’t compromise, couldn’t separate himself from the light-rail issue, and couldn’t bring himself to trust anyone beyond a small circle of people who had the same deficiency they accused city leaders of having: the tendency to put selfish concerns ahead of good public policy.

Chastain can’t see that. He declined Erdman’s gesture because, he says, he didn’t want a “business veto” of his plan, he didn’t want to give up a vote during a major election, and he couldn’t bring himself to “cut a deal.”

“We had a fundamental difference in philosophy,” says Chastain. “The city (might) have put on a competing ballot measure. We didn’t want to get stuck with another bad plan. We wanted to put this major issue (before the public) without city officials who don’t know what they’re doing. I argued against it; I know what the city does. They never approached me until the petition was in place.”

In his mind, he was taking the high road. In the end, it just guaranteed another light-rail failure at the polls. Chastain could dream aloud, prodding people to sign his petition, but he could not lead.

And despite the failures, humility has yet to help him understand his leadership shortcomings.

“I’m not bitter. It’s not my nature,” he says. “(This vote) was the most disappointing yet because I know it’s going to be my last one. Nobody in this town is going to do what I did.”

Let’s hope not. Let’s hope there are no more failures when it comes to light rail. Let’s also hope that Chastain really does what he says this time and stops mounting petition drives. But he promised to go away after his 1999 proposal was defeated, yet he returned, clipboard in hand.

“Anybody has a right to make a personal choice. I have a right to change my mind,” he says. “I don’t think that’s unusual. I’m not going to apologize for changing my mind.”

That comment points to Chastain’s need for celebrity status and his denial of the responsibility that comes with occupying the public limelight. For Chastain, being public doesn’t mean being a public figure. Why else would he brush aside as inconsequential the fact that he lied to the public about ending his light-rail petition drives? And why else would he lay blame everywhere except at his own feet when his proposals fail?

“It’s a sick climate,” Chastain says of the criticism directed at him and his ideas. And when The Star failed to endorse his most recent light-rail proposal, it was because it was “personal.”

In 1996, when city officials prevented Chastain’s competing sales tax proposal for renovating Union Station from getting on the ballot, it was personal. Chastain took the city to court, winning $50,000 and the opportunity to say he was right. The public recognized the wrong, and that empathy carried over into the 1998 vote on his light-rail proposal — it got 45 percent of the vote. But Chastain didn’t know how to ride the goodwill. Despite the legal vindication and his voluntary step into public view, every criticism, every question, every snub became personal. In a leadership role, nothing can become personal because that results in isolation. Chastain can’t see that. Amid such blindness, he filed two libel lawsuits, keeping it personal. The basis for the suits were articles in The Kansas City Star and comments made on KCPT Channel 19’s Ruckus program, both having to do with Chastain’s 1999 proposal.

The Star was named in both lawsuits. Cleaver and Star reporter Jeff Spivak were also named in one; Chastain named political consultant Steve Glorioso and Rockhurst University political science professor Frank Smist in the other. A judge has since granted a motion to dismiss both lawsuits. Chastain says he doesn’t plan to appeal the ruling on the suit against Glorioso and Smist but will appeal the one that includes The Star, Spivak, and Cleaver.

Incredibly, Chastain, the plaintiff, offered to drop the lawsuits for $150,000. What he does not understand is how the offer could be seen as attempted extortion, that the rights or wrongs of his lawsuits become irrelevant, that people would view them as nothing more than attempts to make some money. I have to wonder whether Chastain’s debts from the 1999 and 2000 light-rail campaigns — some $13,000 by his count — drove him to such stupidity.

Many of his arguments I can support. In this town, leadership efforts find little footing when they come from outside the circle of attorneys and businessmen who maintain the status quo. Chastain’s ideas for Union Station, Penn Valley Park, and light rail are visionary. If a banker like Bill Nelson or a philanthropist like Louis Smith or a businessman like Ollie Gates had come up with them, the civic establishment would have worked hard to lay the groundwork for public acceptance. There wouldn’t have been the heavy-handed ridicule and blanket negativism that greeted Chastain at almost every turn.

There’s no doubt that Chastain was hit hard in the press and on the street and that there was a conscious effort to magnify his faults and play to his greatest failings.

But when Chastain says, “It’s too late for me,” in response to my question about whether he’ll mount yet another light-rail effort, I want him to mean it. If light rail never becomes a reality, a lot of people in Kansas City, including me, don’t want to blame Clay Chastain. There will be plenty of other people needing something upside their heads.