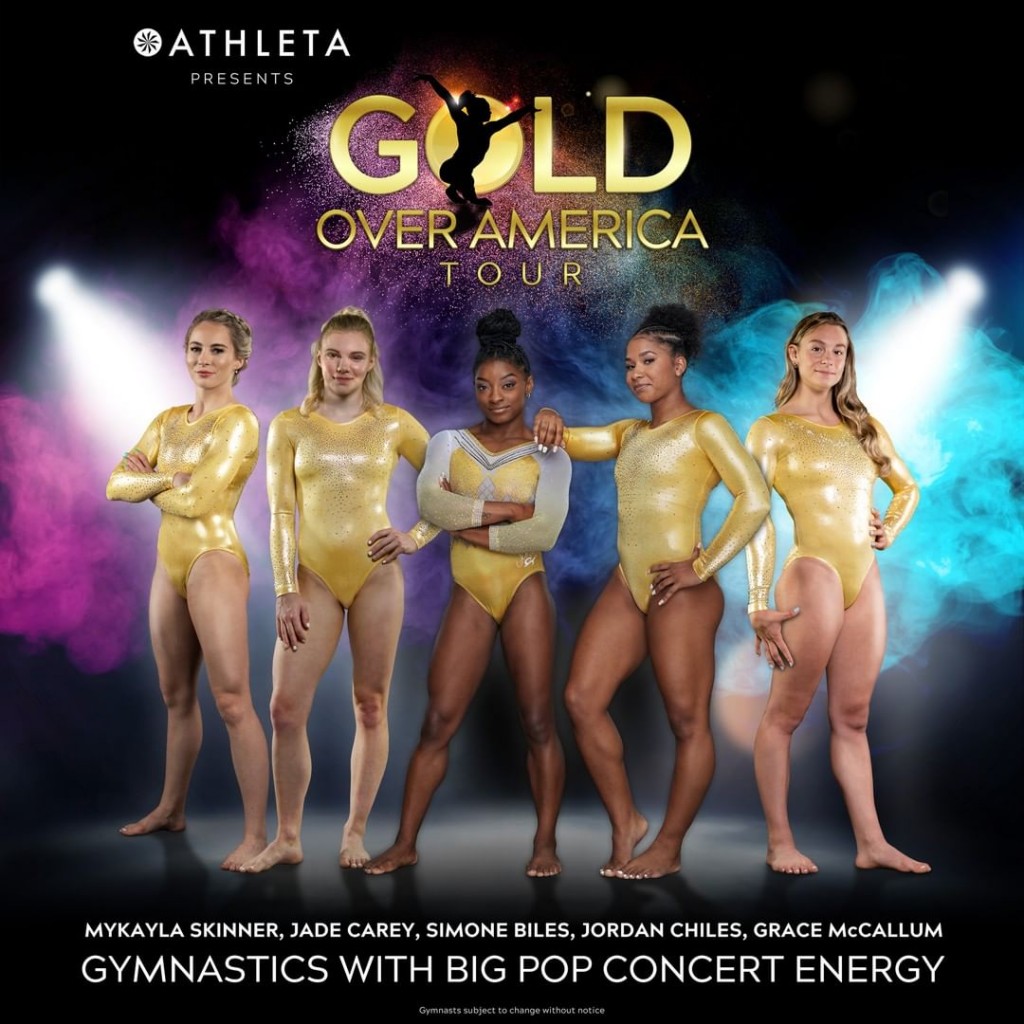 Olympic gymnast Jordan Chiles has had quite the 2021. First she competed in the Tokyo Summer Olympics, wherein her squad won the silver for team competition. Her hometown of Vancouver, Washington, held a parade to celebrate said win, and she’s finishing it up by touring the country as part of The Athleta Presents Gold Over America Tour (G.O.A.T.). Said tour features “an all-star team of gymnasts,” which includes Chiles along with Simone Biles, Jade Carey, Grace McCallum, and MyKayla Skinner—among many others.

Chiles enters UCLA and joins their gymnastics team in the spring of 2022. It’s a lot for someone who turned 20 just a couple of months before her medal-winning competition. Our Zoom conversation ahead of the Gold Over America Tour did not lack for topics to discuss. 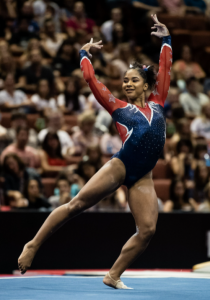 The Pitch: I don’t think I’ve ever gotten the opportunity to ask anyone this question: what is it like to have your hometown give you a parade?

Jordan Chiles: I would have to say it’s an incredible moment because you don’t expect so many people to show up for you in the way that they show up. I should say, for me, it was more of how many people actually supported me because where I’m from? It’s a very, very small town—very small—so having that many people support me was an amazing thing. I loved it so much. It just made me realize how much support I’ve had ever since I started gymnastics until now and I really appreciate them.

In addition to your hometown getting behind you, you’ve also had the entire country get behind you during the Olympics and now you’ve got this tour that’s going all across the country. What’s the appeal of getting to do a tour with all of these other gymnasts with whom you’ve competed for so long?

I think it’s just giving us the opportunity to show the world another side of us–that we can have fun. We can have different experiences. We can enjoy the moments that we’ve accomplished and also showing little girls, no matter what, you can have big dreams and if you believe in them, they’ll come true. It’s going to be cool just to be able to be out on the floors in those arenas everywhere, all those cities that were going to and showing them, “Look, we’re having fun, too! You should be able to have fun as well.” It’s going to be really cool, especially being with the girls that are going to be there. We have such high energy. We have an amazing bond, so we’re going to be able just to go out there and have fun.

There’s gotta be something great about not only getting to share what you do with people who have probably only ever seen it on television or, through YouTube clips, but also getting to do routines without having anything on the line but entertainment and having fun.

A hundred percent. It’s going to be totally different. For us–yes, we’re doing gymnastics, but we don’t have pressure. We can mess up. We can do a lot of things and not get critiqued about it because it’s not for a competition or it’s not for being judged or it’s not for making a team. It’s just for us to show the world we can entertain, as well, and I think that’s the most important part about who we are. There’s more than one side of it. I love the entertainment world, so having this opportunity is a huge thing. It’s so amazing.

Earlier this year, you got a lot of attention for your floor routine that featured music from Spider-Man. Have you gotten to hear anything from any of the folks involved with that movie? Tom Holland, I think everybody’s seen that clip of him doing “Umbrella” on Lip Sync Battle, at this point, and it seems like something he’d be into.

No, I haven’t heard anybody from who created the movie or him himself but, you know, I’m not into trying to have a video go viral and hope that this person sees this, because I feel like if they want to see it, they’ll see it. At some point, they will see it and it will get back to me. Honestly, I just love superheroes in general and Spider-Man, for this moment—I was going through something that pertained to me.

In his movies, he starts out with him and making his own webs and all this and then he ends up having the time of his life because of who he’s around and he gets new suits and all that. It kind of pertains to me. In the years that I’ve had, I didn’t start out so well and then I had an amazing accomplishment, so the Spider-Man movie theme song that I had chosen was something that was like, “This could pertain to me and I like it.”

You’ve got an Olympic medal, you’ve got these championships, you’ve got a clothing company and now you’re going to college next year. As you are already such a success, what do you hope to get out of college?

I just want to have that college experience. I think a lot of people may think I’m weird and it’s just like, “It’s just college,” but coming from my world, college is something that I’ve always wanted to experience and I think it’s a good thing to have experiences. Also, for the gymnastics team, I’m hoping to do big things for them. Maybe win some NCAA titles. You never know. Get those huge accomplishments that I feel like we’re able to do. Those are all experiences for me and that’s what I’m hoping for is just a huge experience.

Look: L.A. is fun in general. I’m a city girl, so that’s why I love UCLA. I love L.A. itself and I just want to have fun with everything. Coming out of college, I just want to look back and be like, “Yep. That was a fun chapter that I just wrote.”

I saw somewhere that one of the minors you’re considering is zoology.

So, zoology was actually supposed to be my major. I love animals so much. You don’t even understand. I used to have turtles, fish, snakes, lizards, bunnies, chinchillas–I can’t name as many pets as I’ve had. I just love animals so much. I love it. I love the fact that their culture is different than ours. I just want to figure out like, “Oh, what do they eat? How do they stay healthy?”

That was supposed to be my major, but then I switched it to general business, ’cause like you said, I do have my own clothing line, so I just want to keep going that route. Then I was like, “Maybe I can minor in it,” because majoring in zoology? When you have a zoology degree, the only thing you can do is open up a zoo and then maybe go on safaris or something like that, so I was like, “I kind of want to do more than just that.” I’ve gone back and forth through my minors with zoology, acting, stunt double–there’s been a lot of things, but yes–I’ve said that my minor might be sociology.

Wait: you can minor as a stunt double at UCLA?

Well, it’s hard to explain what the actual minor is because it deals with acting. It’s just one of a lot of things that you can do at UCLA, but I didn’t even know. I was like, “What? This is a thing?” 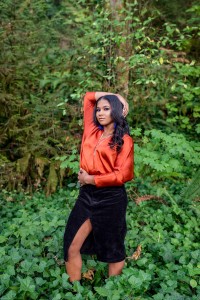 Yes, I am because I know, yes–gymnastics is my foundation of who I am, but there’s also more sides. Like I was saying earlier, there’s more sides of me. There’s a fashion side. There’s an entertainment side. There’s an, “Ooh, I want to be a backup dancer for some artists.” There’s different sides to me that nobody really knows and I just want to be able to do that when I’m done with gymnastics, whenever that is. I don’t even know when that is.

You’ve got things planned out pretty well, but I imagine you’re still just taking opportunities as they come, as well?

Yes, of course. The other day I was in New York for New York fashion week, so that was pretty cool. I’ve never thought I would ever be in a fashion show and it was the most fun I think I’ve ever had in my life. I enjoyed every last minute of it. I would do it again.

I think it’s just being able to see the outcome of what I have accomplished already and these are my little rewards that are being thrown at me, so I just take them for the ride and see how they turn out. I just love it. It’s really cool.

Jordan Chiles will appear as part of The Athleta Presents Gold Over America Tour at the T-Mobile Center on Tuesday, October 12. More details on that show here.