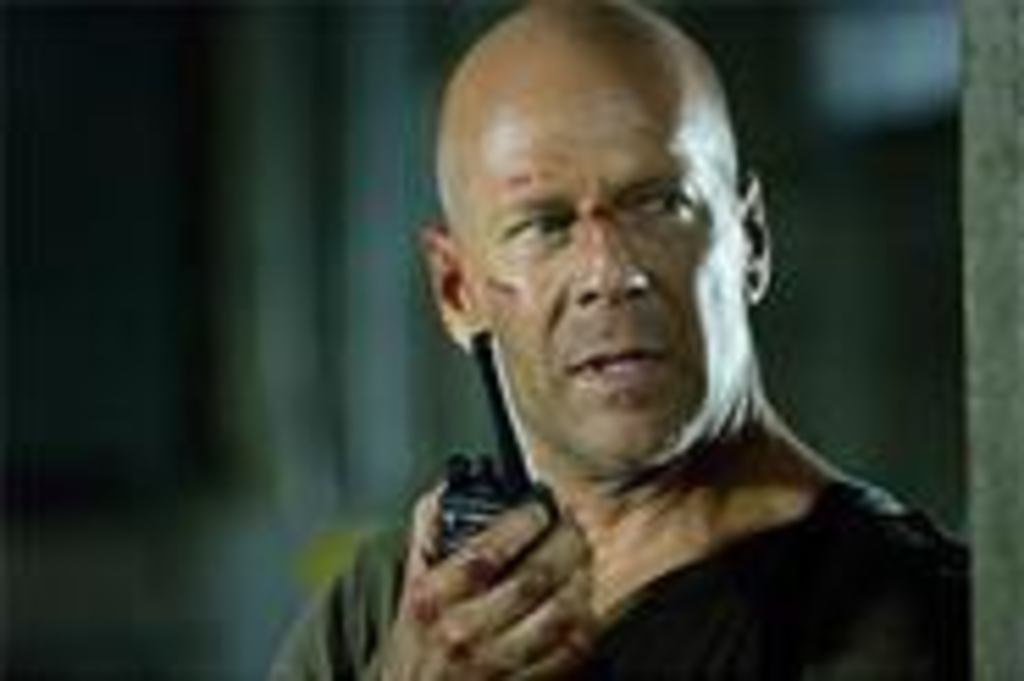 Still an all-American bloodhound after all these years, Bruce Willis’ Det. John McClane begins Live Free or Die Hard sniffing around a Rutgers-Camden parking lot and busting the frat boy who’s been trying to cop a feel off his daughter, Lucy (Mary Elizabeth Winstead). Oh, Dad! Much of the ol’ action hero’s aging core audience is presumably tied down these days, so the main duty this time (at least for studio Fox) is to serve and protect the kids. Can we say yippee-ki-yay, motherfucker and still get a PG-13?

Of course, there’s a terrorist scheme in the fourth Die Hard, something about a spurned patriot’s warped bid to expose the weakness of our hackable homeland security. But the real intrigue has to do with whether McClane — “a Timex watch in a digital age,” says the lead baddie (Timothy Olyphant) — can log in to 2007. This is nothing new for the geezer blockbuster. An arthritic Rocky Balboa was sweating computer simulations of his slugging ability last winter, and Firewall had Harrison Ford climactically futzing with an iPod. As for Willis, wasn’t it nine summers ago that he stubbornly fended off Y2K with jumbo drill bits in outer space while guarding daughter Liv Tyler’s virtue against the advances of frat boy Ben Affleck?

Maybe McClane, in ’80s action par-lance, is too old for this shit. But at least he’s blessed to have youth in tow; his new partner is a twentyish hacker from Jersey who has inadvertently helped the villains get a virtual leg up. So as the bad guys plot a nationwide blackout by computer, the digitally challenged McClane mans the old reliables — pistol, CB radio, various motor vehicles and what’s left of his wit(s) — while the kid (Mac pitchman Justin Long) remains exclusively in charge of code breaking, which means he’s often seen at a keyboard flipping his bangs and typing really fast. Would you believe these two don’t get along at first?

We’re far from the original Die Hard, now a model of restraint and even characterization. Whereas regular-guy McClane was afraid of air travel in ’88, these days he’s possessed of the kind of superhuman calm that comes with a $20 million paycheck and a sizable piece of the back end. As much as any Rocky bout or Mel Gibson film, the Die Hard series remains predicated on the spectacle of its hero’s battering. But Willis’ newly cultivated Zen is such that swinging into the side of an elevator shaft looks no more fatiguing to McClane than an intense session of Bikram yoga.

The first three Die Hards are full-on disaster movies with towering infernos, crashed airplanes and a Manhattan on red alert, but the threat in the post-9/11 installment is virtual. The baddies’ would-be panic-inducing broadcast of a blown-up U.S. Capitol won’t much rile anyone who saw Independence Day. And though McClane’s young sidekick comes on like a junior Chomsky (“The news is completely manipulated!”), everybody knows by now that fear is little more than must-see TV.

Maggie Q’s particular menace can be put down with another PG-13 quip (she’s a “little Asian chick, likes to kick people”), but the trickier challenge in Live Free is familiar to our listless hero: getting Lucy, like Mom in ’88, to go by the last name McClane. Whatever she decides, Dad is really going to have to live freer or die harder next time.