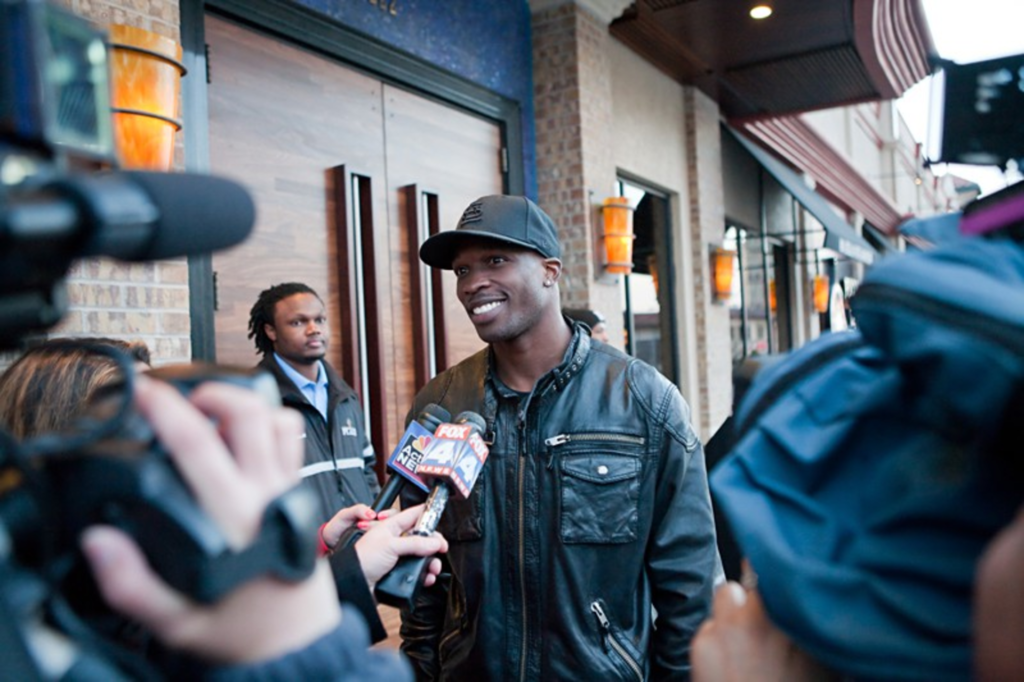 The soccer pitch is not the natural habitat for Cincinnati Bengals wide receiver Chad Ochocinco. Neither is the gridiron, though, which he has blazed up and down for 10 NFL seasons. Ochocinco’s real home turf isn’t on a sports field of any kind. It’s where those who write headlines can be won over by his grin and his willingness to be unusually candid. It’s where camera shutters fire so rapidly that it’s hard to hear his soft voice.

A crush of maybe 40 sportswriters and photographers stalked Ochocinco’s every move on the field during his first session of a four-day tryout with Sporting Kansas City last week. A cameraman orbited the swift Ochocinco as he worked through drills. An audio engineer held a boom mic over his head like a gray, furry halo.

“I love you,” the 33-year-old six-time Pro Bowler told the media assembled to quiz him afterward. Ochocinco has long claimed soccer as his first love, but he hasn’t played the game competitively since his sophomore year of high school, in 1994.

“The only thing I’m probably good at is being fast as hell,” he said, putting modesty ahead of his usually outsized personality. “That’s about it right now. I don’t think I’m going to be taking anybody’s job. It’s not going to happen.”

Everything about the tryout had the appearance of a publicity stunt manufactured by a Major League Soccer team starting the season with a 10-game road stretch and an attention-loving star locked out of the NFL. Ochocinco is, after all, a master of keeping his name in the press. In 2010, he starred in Dancing With the Stars and Ochocinco: The Ultimate Catch, a VH1 dating show. He then reportedly proposed to a star of Basketball Wives, another reality show on that cable network. There also are the iPhone apps. With one, a user can pinpoint his location; the other feeds a stream of news stories about him (OCNN: Ochocinco News Network).

Best of all is his Twitter feed, a torrent of Ochocinco thought and Ochocinco action that has so far attracted more than 1.8 million followers. The New York Times Magazine reported last week that Twitalyzer, a research company, ranked Ochocinco the second-most-influential tweeter on the planet. And he made full use of the medium to promote his time in Kansas City. “#OCNN News: Tryout went well, about to head out with some of the guys. Thank you @SportingKC for the opportunity #ochofutbol,” went one post.

Green Bay Packers tight end Jermichael Finley used Twitter to take a shot at Ochocinco. “Man I think this cat @ochocinco is a clown. Bruh soccer seriously, sit down an wait for this lockout to b over and play what u no best,” he wrote last week.

But Ochoccinco appeared to be trying hard, and Vermes admitted that he was impressed by how quickly the trialist had advanced.

Ochocinco went as far as fulfilling his rookie obligation of buying the team dinner last Thursday — something he managed to turn into a major production. He announced on Twitter: “Taking the entire team to Fogo De Chao tonight, I’m the rookie in a sense so this should be fun, what are y’all doing?”

Inside the Brazilian steakhouse that night, ESPN shot part of the meal for a segment about Ochocinco’s tryout for the network’s All Access series. Everybody knows any Ochocinco story — stunt or real — is a good one, and ESPN wanted this one to itself.

But as our photos show, Ochocinco — as of Tuesday, an “honorary member” of the team — belongs to all of us. 

5. He is irresistible to the media.

With a new stadium and brand, Sporting Kansas City is earning steady media coverage. But Ochocinco is the kind of camera catnip that could get the team to lead local sports segments and SportsCenter, too.

Ochocinco had the 20th-best-selling jersey in the NFL last year. If he suits up for Sporting Kansas City, even if he just rides the pine, baby-blue SKC jerseys emblazoned with 85 would infuse the team with plenty of green. You don’t have to be a soccer fan to be an Ochocinco fan.

That’s Ochocinco’s ranking on a list of the 10 most influential people on Twitter, compiled by research firm Twitalyzer. His 1.85 million followers worldwide would make the club’s marketing department drool; Sporting Kansas City now claims only about 10,000 followers.

Football has made Ochocinco a wealthy man, and during a press conference following his first tryout day — his diamond earrings sparkling in the sun — he offered to play for free. But that’s contingent on the NFL staying locked out while he remains under contract. Even if he’s the world’s richest soccer intern, what team would turn down that offer? MLS top brass is praying for the cancellation of the football season.

Really. Over an eighth-of-a-mile course, in 2007, for charity. Enough said.