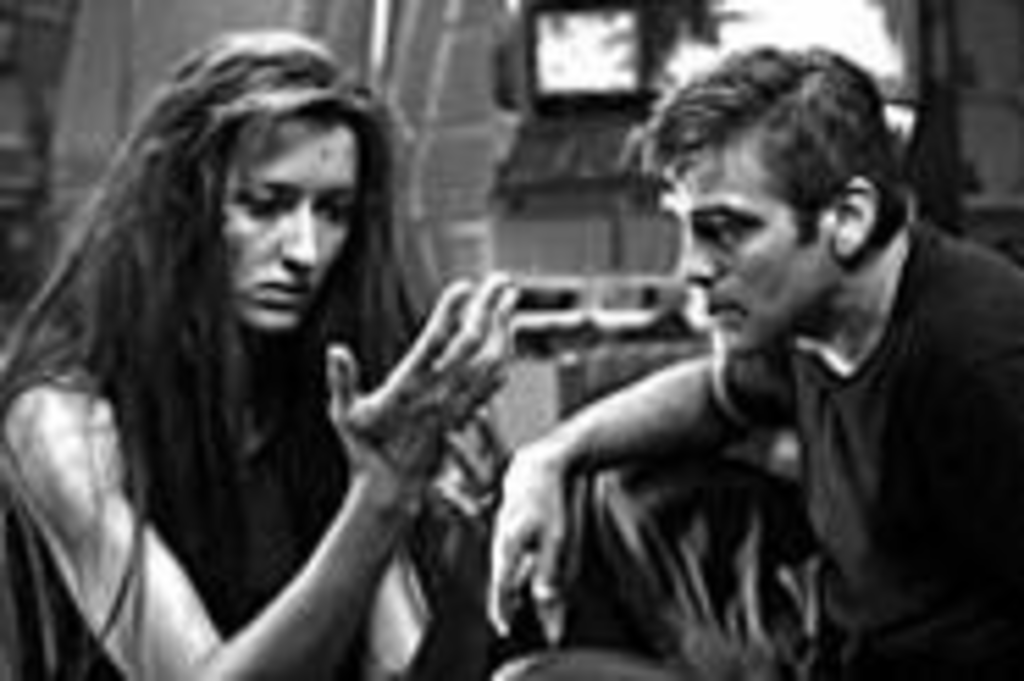 The smart sci-fi fan knows that, technically speaking, Steven Soderbergh’s Solaris is not a remake of Andrei Tarkovsky’s film but rather a newly filmed interpretation of a novel penned by Polish writer Stanislaw Lem. Nonetheless, the new film stands in a mighty big shadow. After all, someone attempting to make a new Wizard of Oz, for instance, or Gone With the Wind, could claim that he was merely re-adapting the book, but no director could hope to fully escape the memory of the landmark interpretations by cinematic predecessors.

Tarkovsky’s version, though well-respected, gets a bad rap these days. It’s commonplace even among critics who should know better to deride it as incomprehensible and boring, though it is neither — merely lengthy and Russian, which scares off some people. True, it’s laden with symbolism, but you need not even pay attention to that; there’s a story going throughout its nearly three-hour length. You want boring, go to the chapters in Lem’s book that forget about the characters and instead endlessly describe the fictional, speculative physics of the titular imaginary ocean planet.

Both Tarkovsky and Soderbergh wisely play down the geek technobabble to focus on the dilemma of Kris — here, Chris (George Clooney) — a psychiatrist sent from a mundane future Earth to a space station orbiting Solaris. Weird stuff has been happening, but no one will say exactly what. In this new telling, Chris has been sent to bring back the remaining crew safe and sane, though he himself is questionable in the latter category, brooding endlessly over his dead wife, Rheya (The Truman Show‘s Natascha McElhone, way less cute than Natalya Bondarchuk but definitely scarier). So when Rheya shows up alive in his space station bunk the next morning, well, that could really throw off a fella’s equilibrium.

Since flinging her into space creates only a temporary delay — she’s back in the sack the next morning — Chris does what most men would and gets his groove on. (That old standby “Can’t live with ’em, can’t kill ’em” holds literal truth here.) Meanwhile, we get a look back at how he met the real Rheya and at the incident that split them. It’s telling, and relevant to the plot, that Chris doesn’t remember much about the deterioration of the relationship.

At this past summer’s San Diego Comicon, producer James Cameron promised that this Solaris would resonate with “anyone who’s ever been in a relationship.” Not that the typical Comicon attendee would know from experience, necessarily, but the resonance here seems forced, mainly because we know so little about the principals: He’s a psychiatrist who doesn’t believe in God and knows exactly one Dylan Thomas poem by heart (“And Death Shall Have No Dominion,” naturally); she has an English accent, gets moody sometimes and in one scene carries a doorknob around for no particular reason. More is needed if we are to feel the vicarious ache of longing. A longer cut allegedly exists with a possible DVD future; both Soderbergh and Cameron loved it but decided that audiences would be bored by it. They should have had more faith — the flick is different enough to alienate mainstream crowds as is, so why not go all out?

The supporting cast — Jeremy Davies, reprising his Million Dollar Hotel schizo shtick as loopy Dr. Snow, Soderbergh regular Viola Davis as uptight Dr. Gordon and German actor Ulrich Tukur as Chris’ deceased best friend — gets little screen time and less analysis. (Clooney is so obviously older than Davies and Davis that he feels like a dad lecturing the kiddies in their scenes together.) The movie runs about an hour and a half, which isn’t enough to give them more than one-note appearances in the background of the love story, which also moves a touch too briskly — the Rheya clone figures out her circumstance very quickly and is kind enough to explain it all to us, thus demonstrating that she can’t possibly be real. No human you know is likely capable of being so objectively self-analytical, especially if she’s busy faithfully copying someone who was a mess to begin with.

For all its flaws, though, Solaris is a good try, and it’s a definite improvement over the dull remakes Soderbergh has been sleepwalking through lately. Longtime fans will be pleased to know that the director is back to his old stylistic tricks, jumping back and forth in time, overlapping sounds from the previous scene and shooting the backs of people’s heads in close-up. Like Tim Burton remaking Planet of the Apes, Soderbergh is keenly aware that the original film’s ending was one hell of a sucker punch, and like Burton, he has tried to come up with a new twist. (The book has no real ending; it simply stops without full closure.) At first, Soderbergh seems to have pulled it off, but ultimately he doesn’t quite get away with it. What should feel transcendent instead plays like a cheat, but that’s mostly because he never lets the audience invest fully in the romance.