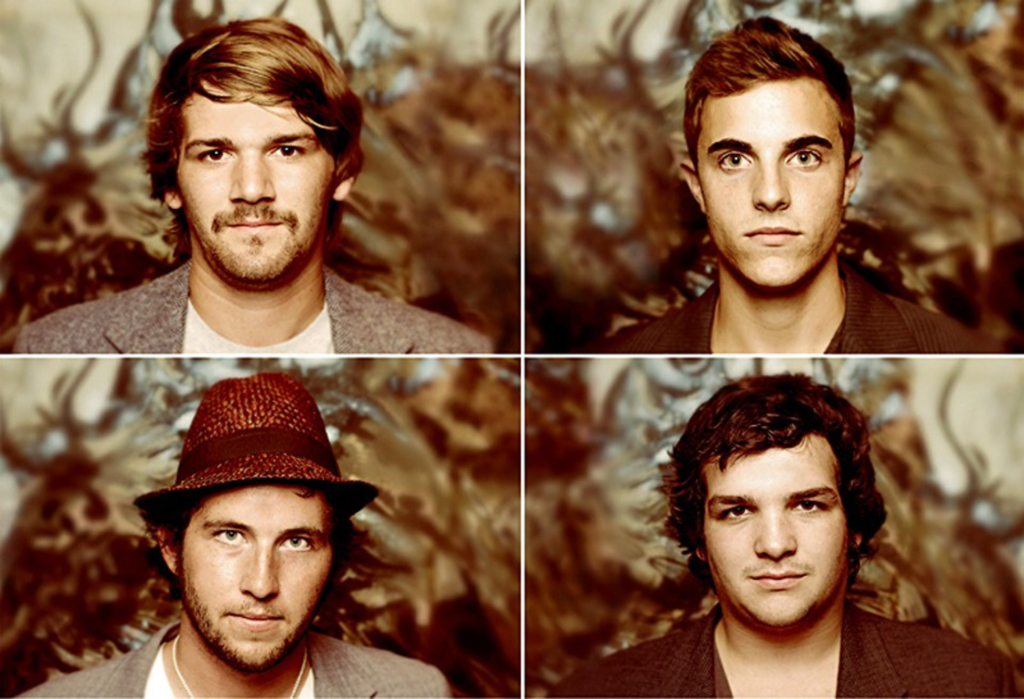 When asked about his body of work, Lou Reed once replied that he had been rewriting the same song for a long time. “Except my bullshit is worth most people’s diamonds,” the legend famously qualified. The search for the same intuitive understanding of artistic reinvention is at the core of the unfolding story of Kansas City’s O, Giant Man.

Chris Robbins and Andy Wendling huddle at a table in the Starbucks on 39th Street. They’re dressed like average 21-year-old musicians: V-neck shirts, necklaces, stocking caps. Robbins apologizes for the lateness of the other half of the band, Jake and Rick Schulenberg. When Robbins called them 45 minutes ago, only one of the brothers was awake. As the interview begins, the Schulenbergs arrive with a flurry of exclamations (“Dude!”) and laughter. But for all the laid-back amiability, the band members are serious about their music.

O, Giant Man, like many fledgling rock bands, originated in high school. Frontman Robbins began jamming with drummer Wendling during their senior year at Park Hill High School. Invited to a battle of the bands, Robbins called upon his old jam partner as well as an acquaintance, Jake Schulenberg, to form what Robbins calls a “pro-tempore group.” (Eventually Rick signed on to play keyboards.) After a year playing what the band now calls “awful songs,” the group worked its way up to performing real gigs.

Throughout the fall and winter of 2009, the band wrote and recorded its eight-song debut, Everybody Knows I’m Just an Animal. “We did two songs in September, but then we ran out of money,” Robbins says. Laughs and eye rolls punctuate the story as the members of O, Giant Man recount putting up drywall for a recording engineer in exchange for studio time.

The work paid off: Animal earned an honorable mention in The Pitch‘s year-end top-10 list of local releases. But the band members agreed, despite positive reviews, that they needed to go back to the drawing board. “We released the album and then decided to never play any of those songs ever again,” Robbins says with a shrug.

Throwing away a debut album seems unthinkable, especially if it’s a band’s entire catalog. In the yearlong process of making the album, though, the group had grown out of its freshman sound. “It’s a good album,” Robbins says. “The engineer is a great engineer. It’s just a different sound than what we’re after now. We have never considered the first album something that we regret or that wasn’t as good as we expected. We just realized that we had rushed doing the album. Our sound was changing.”

The fallout of this abrupt change has been strange. “People want us to play a song, and we don’t want to play it anymore,” Robbins says. Why? “It’s kind of boring,” he says.

“It makes it kind of hard to be a fan,” Wendling concedes.

Through the music grapevine, their debut found its way to sound engineer Michael Stout. “Mike was working at Sweet Tea studios in Oxford, Mississippi, and he had worked with Rogue Wave and on the new Wavves album,” Robbins says. “He contacted us and wanted to work together when he moved back to Kansas City.”

O, Giant Man made no effort to play shows over the summer of 2010, save one, which would prove to be the most important show of the group’s career so far. When Stout returned to Kansas City in July, the group scheduled a gig with We Are Voices to provide Stout a sample of its live sound.

“We started dissecting our songs a little more,” Wendling adds. “It changed the way I look at the structure of a song.”

Three new songs — “Wait, Wait,” “Mountain Train” and “Decisions” — developed from those sessions. Stylistically, they represent a departure from the band’s previous work. With a bigger vocal sound, quicker tempos and more electric elements, the three songs come across with more strength and cohesion.

O, Giant Man has a simple word for this new sonic direction: happy. The band members attempt to articulate their new perspective on music, but it’s clear that they’re still in the process of discovering it themselves.

“It started as folk-rock because I only played the acoustic guitar for the first 10 months,” Robbins explains. “We’ve always built around my vocals and Jake’s melodic bass. We’re still trying to figure it out.”

O, Giant Man was invited to play on the indie-mecca website Daytrotter in late December. “I think we’re one of two bands from Kansas City that has done a Daytrotter session in the last five years,” Robbins say, his pride obvious. “Just being in there — there’s posters and autographs from Broken Social Scene and Death Cab and Portugal the Man — it’s cool.”

Fueled by the reccent momentum, the group plans a spring EP and a summer tour. But there’s always a chance that O, Giant Man will start over. “We have a horrible habit of writing a song and then playing it once or twice before throwing it out,” Robbins says. “But it’s for the better.” After all, only the men of O, Giant Man know if they’re offering up bullshit or diamonds.