Nothing watered down at Subterranean Gallery’s Hot Tub Dialogues 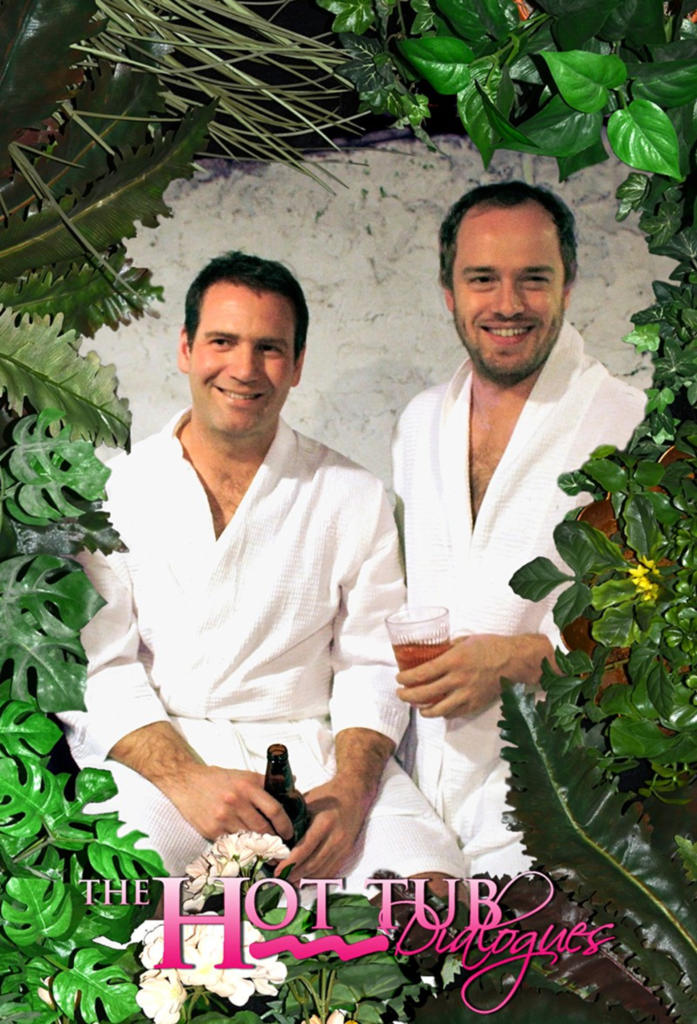 Greeted with alcohol-fueled guffaws and catcalls (“Jorts!”) from audience members crammed into narrow rows of plastic folding chairs, Hesse McGraw dropped his white spa robe on the concrete floor and swung a leg into the hot tub.

“I forgot my bathing suit,” McGraw explained as a Speedo-clad Josh Shelton followed him into the bubbling water.

McGraw, the chief curator at Omaha, Nebraska’s Bemis Center for Contemporary Arts, was here to sit in a hot tub and discuss art and design with Shelton, a principal architect at the KC firm El Dorado and an instructor at the University of Kansas.

The two sipped cans of Bud Light as McGraw brought up the first PowerPoint image, projected on a sheet tacked to the wall behind the tub. It was a black-and-white photo of the 1942 Marcel Duchamp installation Sixteen Miles of String. The artist wound several thousand feet of twine through a gallery interior until it looked like the aftermath of a Silly String battle.

“I feel like, most of the time, we’re trying to catch up with Duchamp,” McGraw said.

Duchamp might have approved of the Hot Tub Dialogues, a series that floats pretension-courting art talk in a purposely down-market setting. It’s been almost a century since the artist challenged exhibitors’ hypocrisy and exclusivity by sending “Fountain,” an upside-down urinal, as a sculpture to the 1917 Society of Independent Artists show. The society had promised to exhibit every submitted work, but “Fountain” was never put on display.

After McGraw’s brief art-history lesson, he spoke about his own career. Recalling his relocation of the Paragraph Gallery from Lawrence to downtown Kansas City in 2003 (pre-Power & Light District), he said, “We could really do anything back then.” Behind him, a video showed one of Eric von Robertson’s polygonal sculptures rolling through a park and down empty streets.

Kansas City’s downtown has changed dramatically since McGraw left the Paragraph for New York in 2005, but so has the city’s visual-art scene. The Urban Culture Project, which helped support McGraw’s gallery, has expanded dramatically in size and scope; it now encompasses three exhibition spaces and a residency program providing free studios to 32 visual and performing artists. McGraw reminded the evening’s guests about the scrappy early days of what’s now a powerful local institution.

The Subterranean Gallery embodies the same do-it-yourself energy that sparked the Urban Culture Project. Artist Ayla Rexroth runs it out of her basement apartment, which makes its openings feel as much like art-school house parties as gallery events. Rexroth and Clayton Skidmore, co-curator of the Hot Tub Dialogues, treat art-curious visitors as house­guests — which is exactly what they are. There’s a private bedroom at the rear of the apartment; the gallery occupies what would otherwise serve as a living room.

The idea for the dialogues came from a joke, but after the pair paid $50 to haul a broken hot tub (donated by an exhibiting artist’s parents) to their basement gallery, they committed themselves. Rexroth and Skidmore solicited friends and strangers for funds via Kickstarter to repair the tub and stock the bar for the event. Those who gave $25 were promised tickets to two of the three lectures. That left the series with a negligible amount of tickets to sell and an audience already familiar with the exhibition space.

Skidmore and Rexroth see the lectures as a way to bring more experienced members of the community to their gallery — and to learn from them.

“As a young artist, there’s really not a set script to follow,” Skidmore said in an interview before the first event. “I feel like it’s important that we find out what kind of experiences they had.” But importance need not feel, you know, important. “We want this to be a very informal moment,” he added. “The hot tub is forcing that to happen.”

“It also helps that our apartment is incredi­bly small,” Rexroth said.

With room for only 30 guests, the Subterranean encourages intimacy. But it also means that a lot of people who want to be there won’t be able to attend. “It’s unfortunate that we can’t let everyone come who wants to. It’s really stressful for us to say no,” Rexroth said.

But those in attendance the opening night of the series seemed thrilled to witness the novelty of a lecture delivered from a burbling hot tub. Midway through McGraw and Shelton’s presentation, two of the guests — male artists in their 20s — stripped down and got in the tub. Water displaced by the extra bodies splashed over the edge and onto the concrete floor. Skidmore ran to retrieve a cooking pot from the kitchen, hoping to scoop out some of the water. The moment was a fine metaphor for what the dialogues address: A scene overflowing with hardworking artists who are willing to experiment and make room for more of their own — and who could always stand a bigger audience.