Not enough water — or soap — flows under Marion Bridge 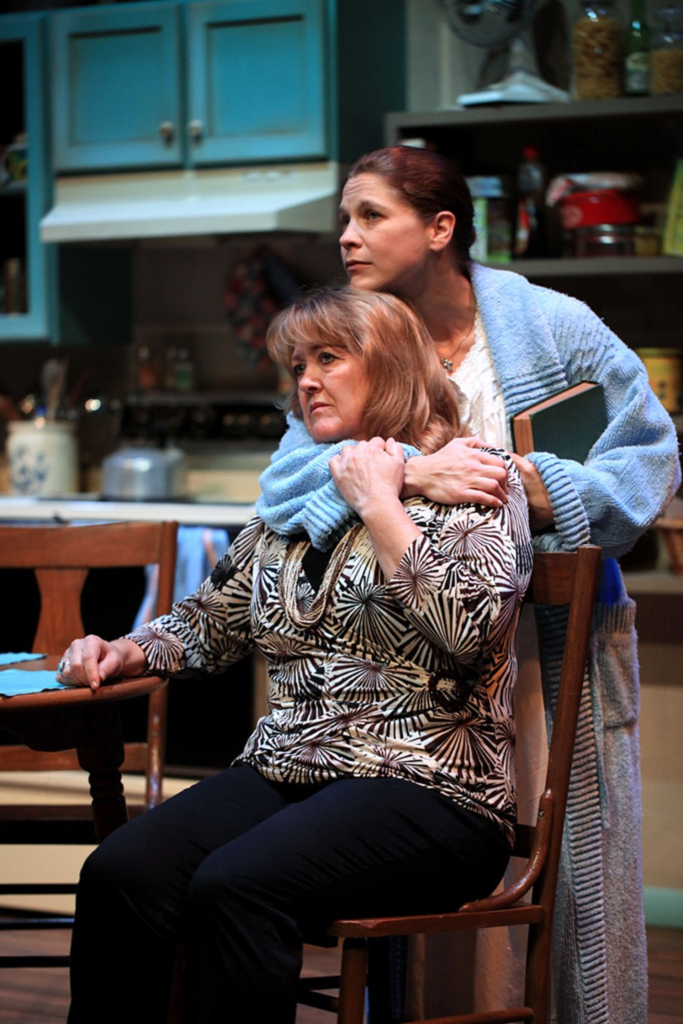 Identical cousins, sexual encounters with aliens, long-lost international-man-of-
mystery fathers — these are the fabulous plotlines of the latest production of the Kansas City Actors Theatre. Well, OK, they don’t drive the play but rather the daytime TV programs that one of the play’s characters watches devotedly.

Daniel MacIvor’s drama, Marion Bridge, concerns itself with three estranged sisters convening at their mother’s deathbed in remote northern Nova Scotia. The play paints a convincing picture of family tensions and alliances and the lack of options in small-town life. Unfortunately, its modest dramatic scope and ambition prove less fascinating than the soap
operas it sends up.

As characters, the sisters are such extreme types that if all three walked into a bar, you’d be well set up for a joke. Agnes is the alcoholic actress who lives in Toronto and is haunted by regrets. Theresa, the straight-laced nun, has spent the past decade cloistered on a farming commune. And Louise is the daft, strangely innocent youngest sister who has never left home and whose life seems ruled by those soaps. Naturally, sisterly clashes ensue.

That these three characters live onstage without dissolving into stereotypes is due to the production’s sensitive direction by
Kathleen Warfel and the fine, nuanced work of its actresses. Despite accents that wobble from Scottish Highlands to Saskatchewan prairie, all three performers keep a secure grip on their characters’ inner lives and express them with emotional and physical intelligence. The gifted Jan Rogge plays blowsy Agnes without vanity, allowing her body and face to sag with the wear of too many disappointments. It’s all too easy to overplay alcoholic despair, but Rogge manages to depict Agnes’ chaos with precision. She travels the play’s largest character arc and shoulders the bulk of the audience’s sympathy.

Cinnamon Schultz’s radiant face recalls a young Cherry Jones, and her manner conveys some of the same directness and warmth. She makes Theresa’s shift from stern and responsible sister (and Sister) to joyous risk-embracer believably gradual and organic. (She is helped along greatly, as is Rogge, by Sarah Oliver’s spot-on wardrobe.) Theresa may be struggling with her vocation, but she’s unquestionably the spiritual, if not religious, leader of the family, and Schultz’s astute depiction gives some moral grounding to the play’s lightweight
feel-goodness.

Rachel Hirshorn does her best in a difficult role — Louise, the sister of indeterminate intelligence and sophistication. Louise is the sort of blank-eyed idiot savant who can be comically dense at times yet speak with startling perception at others. The quasi-Shakespearean fool remains an irresistible device for playwrights and screenwriters, and MacIvor succumbs, neglecting to mark the parameters of Louise’s limitations — a failure that makes the ever-shifting role tricky to play and trickier still to buy. Sometimes she seems nearly simple-minded, oblivious even to her own possible latent homosexuality; sometimes she’s merely a lost young person.

As a naturalistic, quiet family drama of three sisters in a provincial town, Marion Bridge echoes Chekhov’s Three Sisters. But details make all the difference, and MacIvor’s threadbare plotting is closer to an Oxygen network movie of the week. Thoughtful, specific performances enliven formulaic characters here, but they can’t overcome a plot-by-numbers story signposted much too clearly. The bulk of its developments feel not only predictable but also calculated for maximum heart warming.

What’s more, much of what happens (their mother’s death, a disastrous dinner with their father) occurs offstage. That keeps the drama rightly concentrated on the relationship among the sisters, but it also makes for a muted, secondhand quality that muffles the whole.

In his native Canada, MacIvor is known for edgier work, but his reported impetus for Marion Bridge was to make something that his mother would enjoy, and it shows. It is safe, sweet and reassuring — a mom pleaser. The 2002 film version, adapted by MacIvor, is darker, injected with drug addiction, child abuse and incest. That kind of tinkering is basically nipple-piercing the church organist; she’ll still be pumping out the hymns come Sunday morning. What Marion Bridge lacks isn’t depravity but true emotional risk.

On and off throughout the play, Louise’s favorite soap opera, the fictional and patently ridiculous Ryan’s Cove, plays in an unseen room off stage left. Snippets of overheard dialogue between evil, scheming Kara and ever-gullible Justin (“What are you doing, Kara? Are you insane?” “No, Justin, I’m not insane. I’m just bad. Born bad. Bad to the bone”) provide some humor. The bigger joke is that Theresa becomes more hooked on the show than Louise. Given the stark bareness of her nun’s life, how can Theresa resist being seduced by a bit of fantasy? Marion Bridge makes you long for a little of Ryan’s Cove‘s juice, something less subdued and more surprising. This production’s excellent actresses deserve far richer material.