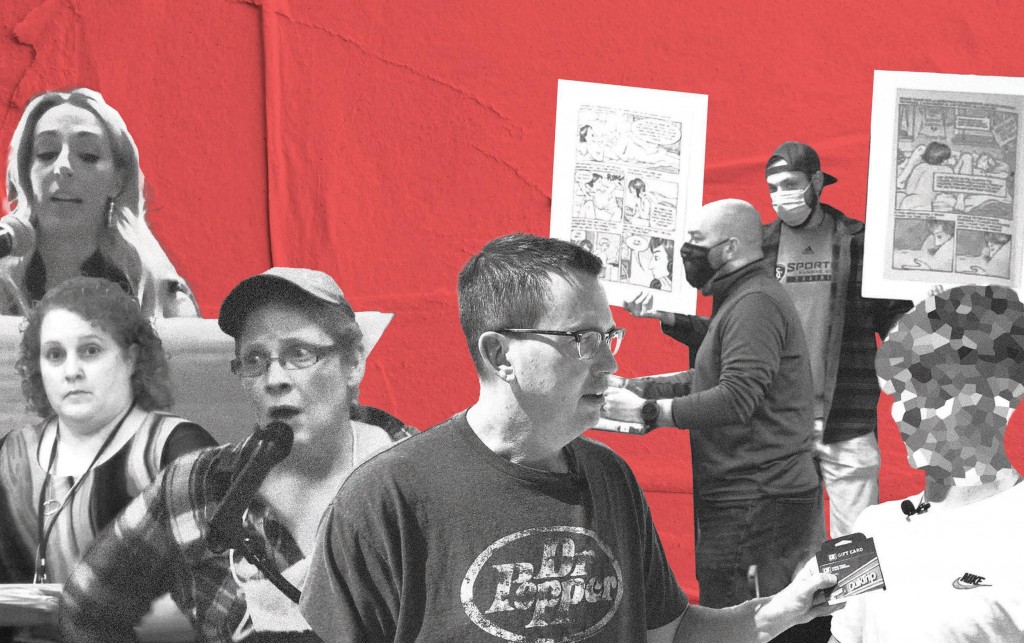 Screenshots from NPA videos and videos of board meetings they attended. // Illustration by Miroslav Pavlovic

In the summer, angry parents began commandeering the public comment periods of school board meetings in the Northland. They loudly objected to mask orders, read passages from books in school libraries and called them pornographic, and accused schools of indoctrinating their kids.

Some claimed an affiliation with a new group, the Northland Parent Association. As classes started up in the fall and districts tried to cope with COVID-19 surges, the group played a more prominent and disruptive role.

According to its president, Jay Richmond, the NPA has about 500 members and many more allies.

“We are normal parents who are tired of having our kids being told what to do when it has nothing to do with education,” Richmond says.

At the very bottom of the NPA’s website, I spotted a video that revealed a lot about the NPA’s philosophy.

Ethan jumped the fence at a Kearney-Smithville football game and ran around the field with his shirt tied behind his head. For that, he was suspended for 10 days, banned from extracurricular activities for a semester, and placed under review for his graduation walk.

Ross opines that the discipline was “over the top.” He says, “It’s kind of like the way they’ve lost their minds on making kids wear masks.”

If Ethan had run around the field with a mask on, Ross suggests, “I bet you the administration and the school board members… would give you extra credit, probably a college scholarship, and maybe even let you walk at the front of the line [at graduation]. What’s your thoughts on that?”

Ross, who has a background in marketing and public speaking, takes the opportunity to make a pitch for the NPA. Then he gets to the Big Reveal: Ross and a few other parents—not the association itself—have pooled funds to present Ethan with a $150 QuikTrip gift certificate.

With a high-five, Ross says, “Thank you for being so crazy, so fun, and getting out of your comfort zone and doing something really wild.” The video ends with Ross declaring, “Ethan, you are my hero.”

Based just on the information presented in the video, the school’s treatment of Ethan does seem a bit harsh. But Ross’s decision to reward him for bad behavior speaks volumes about parental defiance.

In the days since I watched the video, Pink Floyd’s “Brick in the Wall” has been on repeat in my head. But instead of a rock band speaking to disaffected late ‘70’s youth, we have a chorus of suburban parents singing “Hey! Teachers! Leave them kids alone!”

The Northland Parent Association is typical of groups springing up around the country. Conservative-minded parents band together over mask mandates and school closures and move on to book banning and protests of school policies that promote diversity and inclusion and of teaching that attempts to discuss systemic racism in America’s history. (“We don’t need no thought control.”)

The NPA made its mark in the Kansas City region with two actions. In late August, it filed a federal lawsuit against a host of school boards, districts, and public officials in Kansas City and North Kansas City, challenging mask mandates. 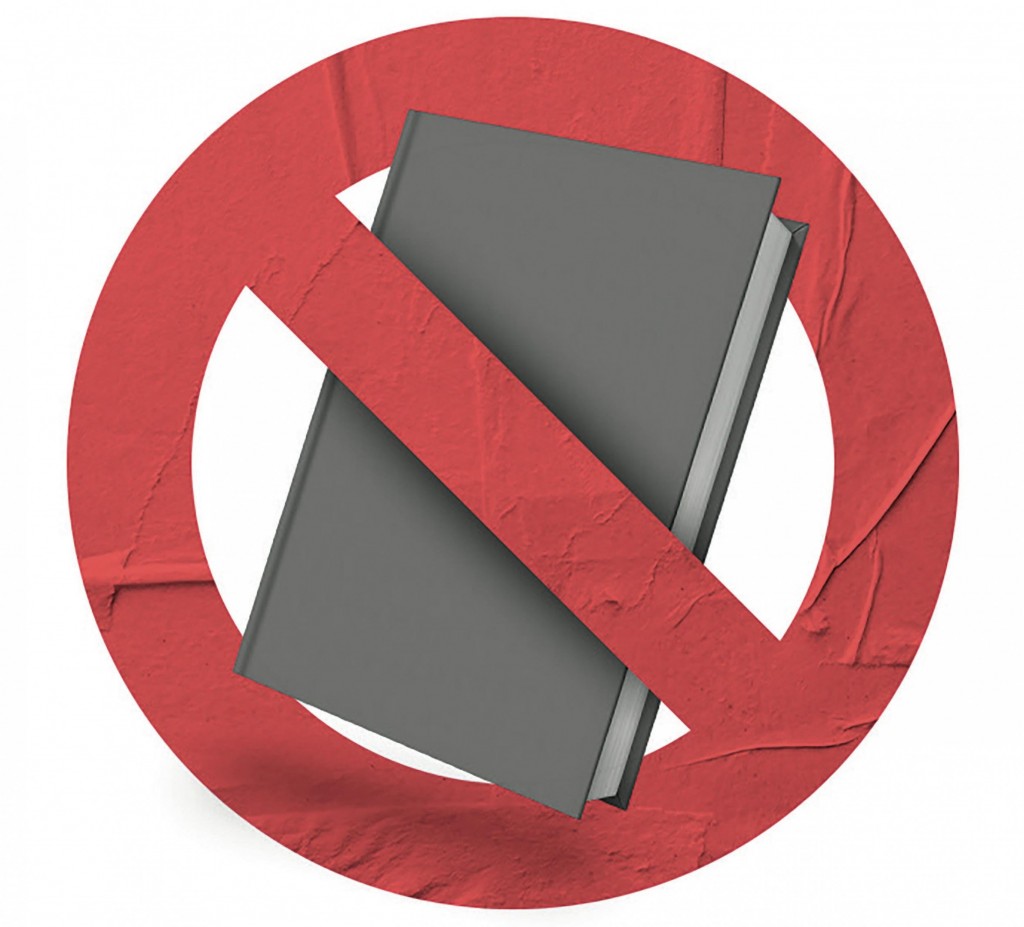 On the surface, neither action turned out well. A federal judge dismissed the lawsuit. The NKC school district initially pulled two books but put them back on the shelves.

A few weeks after Richmond’s presentation, a man who assisted Richmond by holding up posters of pages from Fun Home was charged with child molestation and domestic assault.

But the lawsuit and the book banning uproar turned out to be great publicity for the NPA.

In a telephone conversation, Richmond says he hasn’t been politically active in the past. The pandemic, and restrictions imposed by the schools, changed that. Richmond has three sons. The youngest, an elementary student, struggled with the COVID protections.

“He is a very social kid, and it changed his personality completely,” Richmond says. “He hated school. He didn’t want to have anything to do with it.”

Richmond began speaking out at meetings of school boards and county health boards. When the NPA was formed, he was nominated to be its president.

The pressure on school districts in the Northland, which leans conservative in its politics, is new. For years, the region has been a destination for families looking for public schools with solid academic performance and a full menu of sports and extracurriculars.

Richmond says he used to regard the schools that way, but no longer.

“I grew up here,” he says. “And, yeah, the education in the Northland used to be great and more of a classical learning style. But the last few years have shown that’s not the case. The school systems and school districts have an agenda. They’re pushing that agenda, and parents are waking up to it, and they’re fed up with it.”

I’m not sure what agenda Richmond is talking about. But, as we talk, I realize that Richmond is a school voucher advocate. “In reality, it needs to come back purely to school choice,” he says. “Parents should have a choice about where they’re going to send their children. And if funding follows that choice, that will fix a lot of issues in the schools.”

While not all of the aggrieved parents who show up at school board meetings acknowledge an affiliation with the NPA, they often use the same language. Once or twice a speaker has inadvertently lost track of which school district they were criticizing.

In the Smithville School District, parent Whitney Carlile has made a name for herself by taking board members to task at nearly every meeting, accusing them of cowardice when they don’t respond to every complaint.

“If you cannot handle making tough decisions and working with parents, maybe it’s time to consider if you are capable of performing the duties needed at this critical time,” she lectured the board in October.

“Jeff, if you are more concerned with ICU beds than our kids, you are on the wrong board,” Carlile told him. She suggested he run for the county health board instead—although that board is also under fire from the NPA.

While it’s not confirmed Carlile is part of the NPA, she is now a school board candidate and joins conservative candidates who are stacked up to run in nearly every Northland school board race.

At this point, it’s difficult to gauge the political strength of the NPA. Richmond says it won’t endorse candidates, although when I talked to him, the association’s website stated on its front page that donations “are applied to anything from lawsuits to endorsing school board candidates.”

Richmond also said the NPA is not a 501(c)(3) nonprofit, a classification banned by IRS code from participating in political campaigns.

But the NPA’s filing with the Missouri Secretary of State office plainly states that “this association is organized exclusively for charitable and educational purposes within the meaning of Section 501(c)(3) of the Internal Revenue code.”

Kevin Corlew, the lawyer whose name is on the NPA’s incorporation papers and who filed the mask lawsuit on behalf of the group, did not respond to requests for comment.

Richmond seemed surprised when I told him the website mentions endorsing school board candidates as a purpose for donations.

“I’ll have to check on that, cause that’s something we cannot do,” he said.

Although Carlile and other conservative school board candidates speak as though they universally represent parents, that isn’t the case. At the October Smithville School Board meeting, before Carlile denounced mask rules, two other parents stood up to defend them.

Liberty Parents for Public Schools, an online group of about 1,500 parents and Liberty School District employees and patrons, has emerged as a counterpoint to the NPA. Its mission statement affirms that “public school should be an inclusive experience for all children.” The group has been supportive of mask mandates and other preventive health measures.

Students take a stand against the NPA

But the most effective adversaries of the NPA have been high school students in the North Kansas City School District,

After Richmond’s denunciation of Fun Home and All Boys Aren’t Blue, students quickly organized, got a petition going, booked all of the public comment slots for the next school board meeting, and made an eloquent case for literature that deals with topics like sexuality, gender identity, and racism.

I spoke with three of the leaders, and they said they’d been following the NPA since summer, after the group summoned the district’s superintendent to a meeting and publicly berated him.

The students said they were aghast to see the school district pull two books after Richmond’s noisy protest at the October board meeting. “We really didn’t understand the ‘why’ behind that, and that confusion then turned to action,” said Charles Maloney, a senior.

The district had already returned the books to its schools by the time the students spoke up at the Nov. 22 board meeting, as an audience of their peers and parents applauded heartily.

“I think, for a brief moment, the NPA did win when they pulled those books,” said Phèdre Schlagenhauff, a junior. “It definitely proved the school board had the capacity to give in to that kind of rhetoric. But I think our speeches affirmed their decision to put those books back, and it proved to them that their own education was working and making us well-rounded citizens.”

Kate Maloney, Charles’ sister and a high school junior, said she regards the Northland Parent Association and related groups as pushing right-wing political agendas that are contrary to the goals of public education.

“Students are smarter than these associations think,” she said. “I hope that more students across the nation are using their voices and speaking up because, at the end of the day, we can’t be afraid of them. We can’t let them have that power.”