North, out south, is excellent even when the server’s all mixed up 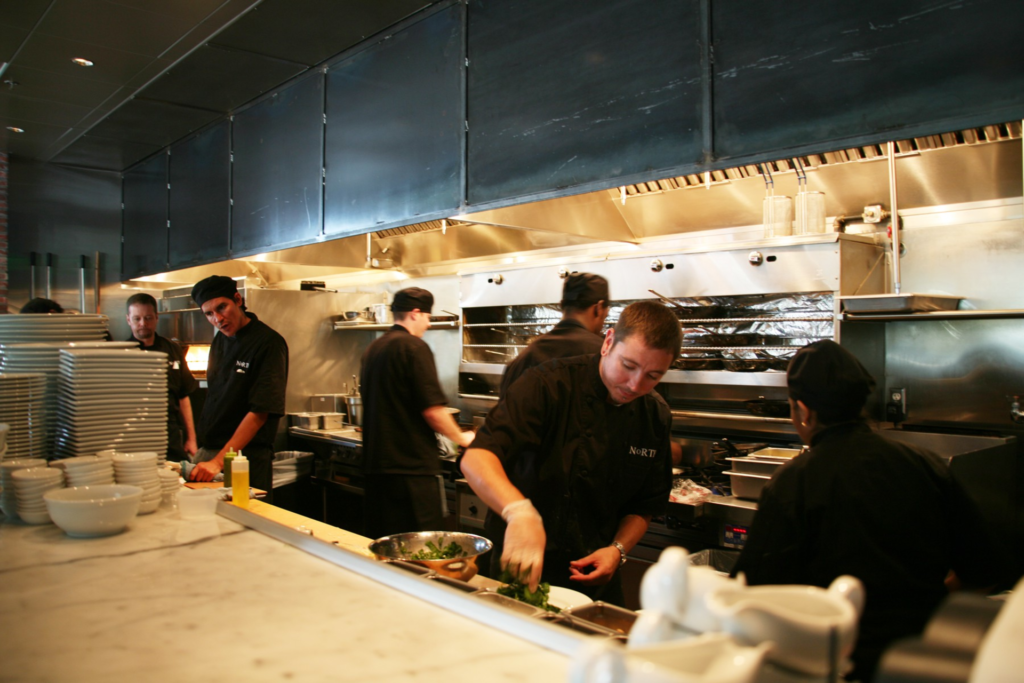 Some restaurant meals barely register in my memory banks. But I’ll never forget my meals at North, the “cool, hip and casual” trattoria — according to the description in the corporate press kit from Arizona-based Fox Restaurant Concepts — for reasons that are at once wonderful, annoying and unintentionally hilarious.

Let’s start with the location: North is south. The stylish restaurant is one of the anchors at the new One Nineteen shopping center at 119th Street and Roe. It also has my vote for being the metro’s noisiest restaurant. It’s so loud, in fact, that during a Sunday night dinner with three friends, we all noticed that the six-top adjacent to our table had given up trying to have conversations above the din and were simply concentrating on their meals.

I was with Bob, Richard and Lisa, and we kept talking — about the reasons for the cacophony: the high ceilings, the many hard surfaces, the thumping trance music. North is a festive place, and everyone around us seemed to be having a terrific time, so perhaps the noise helps keep the ambience “cool, hip and casual,” setting North apart from any other Italian restaurant in town. Sure, it serves pizza, pasta and osso buco, but in its style and spirit, North is nothing like its more traditional suburban neighbors, such as Garozzo’s, Villa Capri, Macaroni Grill and Carraba’s.

North really is cool and hip, certainly as lively as any of its counterparts in the Power & Light District. Big glass doors open onto a pretty outdoor patio, walls are bright with colorful and interesting large-scale photographs, and the crowd is varied.

It’s not a scene for every taste. My friend Richard, who prefers a more conventional Italian restaurant, said the modern, contemporary design and the eccentric musical choices (no Sinatra or Dean Martin, at least not when I was there) didn’t reflect the culinary concept. His Italian-American girlfriend, Lisa, a New Yorker, was scandalized by just how casual the dress code was in this laid-back environment. “People come in wearing T-shirts and sneakers,” she said.

“That’s right,” I answered, popping a marinated olive into my mouth. “And that’s just how people dress to come to my church on Sunday mornings. It’s a different world, sister.”

In my book, different is a good thing. I’m all for the unconventional, the eccentric, the slightly off-kilter. But not when it comes to service. Which brings me to that night’s waiter, a handsome and articulate young man who couldn’t have been friendlier or more attentive, even when he brought out the wrong beverage (“I thought you ordered lemonade”) or the wrong dessert (“You mean you didn’t order the mango sorbetto?”) or mishandled the “bowl incident.”

Before I get to the bowl incident, let me say that I know servers can make mistakes — I was one. But somewhere between the arrival of a tiny dish of complimentary olives and the basket of breads (served with an excellent neon-orange sun-dried-tomato butter), the server placed an empty white porcelain bowl in the center of the table. No explanation. I assumed it was for the olive pits, though it was awfully big for that. It sat there, mysteriously, until the server was clearing the dinner dishes away. “Why is this bowl here?” he asked.

When he unceremoniously dropped the dinner check at the table — without mentioning dessert or coffee — I concluded that the fine art of restaurant service was not this young man’s forte.

Our meal, however, was something to remember, empty bowl and all. The antipasto platter was spartan but tasty, a selection of “seasonal Italian specialties” including excellent grilled vegetables, cold pasta, cubes of hard cheeses drizzled with balsamic syrup, papery slices of cured meats and a single strawberry. A grilled artichoke was simply that: a dark-green globe, split and lightly roasted on a hot grill, seasoned with sea salt and served with a fine lemon aïoli. North’s signature starter is the bowl of zucca chips: zucchini sliced tissue thin and flash fried so that popping one of the airy chips into your mouth is like eating fried oxygen. No guilt allowed.

Since I’d already eaten one of the thin-crust pizzas — a first-rate pie with fennel, sausage and caramelized onion — during an earlier visit, our dinner group decided to pass on pizza or salads and head straight to the secundo course. Lisa is fussy about risotto, but North’s version, made with English peas and truffled mushrooms, won her over immediately. It was the most ladylike risotto I’d ever tasted, exceptionally light, creamy and delicately seasoned (once Lisa swept off the gratuitous mound of pretty little pea sprouts atop the dish).

Bob ordered that night’s seafood special, a quartet of plump, perfectly grilled scallops. Richard generously let me share a bit of his juicy pork tenderloin, crusted with panko bread crumbs, thyme and parsley and rising out of an exquisite Madeira reduction discreetly flavored with thyme, rosemary and sautéed onion. And the robust Bolognese pasta that I ordered was a real winner, with oversized shell pasta smothered in a traditional thick and meaty Bolognese ragu and layered with bubbling mozzarella.

Once the unrequested mango sorbetto was replaced by a tart, soothing lemon sorbetto, we all passed it around with the dense, fudgy slab of Nutella “cake” that the servers describe only as chocolate-hazelnut-mousse cake (probably for people like me, who hate that sticky spread). Yes, Nutella is a chocolate-and-hazelnut concoction, but the delicacy served at North is not a cake and definitely not moussey. The consistency is somewhat lighter than a brownie. It’s nice, but I should have ordered the finale that chef Steven Maak says everyone prefers: his sour-cherry bread pudding.

I’ll remember to order that when I head south to North again.