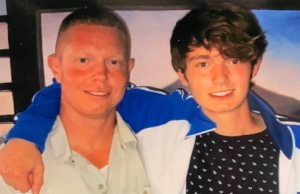 Eric McCauley with his son, Ethan // Photo submitted to the Missouri Independent

Eric McCauley was a first time marijuana offender when he was sentenced to 23 years in federal prison in 2012.

A federal jury convicted him on four counts of marijuana trafficking and 26 counts of money laundering as part of his role in distributing marijuana in Boone County.

Now advocates with the nonprofit Weldon Project are hoping to free him.

On Friday, former U.S. Attorney Barry Grissom filed a motion for compassionate release under the First Step Act, a criminal justice reform law enacted in 2018. The motion was filed in the United States District Court for the Western District of Missouri.

Grissom and the Weldon Project, which advocates for those serving prison time for cannabis-related offenses, argue that McCauley’s lengthy sentence is a “relic from a different age” that would be almost inconceivable today.

“This draconian sentence is rarely imposed today due to the change in societal attitudes toward marijuana,” the motion says. “In the time since McCauley was convicted and sentenced, the majority of states, including Missouri, have legalized cannabis in some form.”

When McCauley was arrested in 2007, law enforcement seized $224,663 in cash and found 240 pounds of marijuana in his Columbia residence. McCauley told The Columbia Tribune at the time that he has “never been more than a marijuana user” and the cash was a result of insurance claims.

The Weldon Project placed McCauley’s name on a list of 25 marijuana offenders sent to the White House in 2020 as part of a clemency campaign. President Donald Trump granted nine of the requested pardons, but not McCauley’s.

“While the presidential clemency process has not offered Eric and similarly situated individuals the second chances they deserve, federal judges are now empowered to grant relief through the compassionate release provision in the First Step Act for any extraordinary and compelling reasons that the court may find,” said Weldon Angelos, founder of Weldon Project. “We hope to see Eric granted release through this pathway and hope to see further systematic action by the Biden administration on marijuana offender clemency.”

Missouri voters approved medical marijuana in 2018. That measure was approved in Boone County, McCauley’s home, with more than 72 percent of the vote.

Katie Sinquefield, a board member of the Weldon Project and daughter of prolific Missouri political donor Rex Sinquefield, noted that in Boone County voters don’t believe “marijuana use or distribution should be a crime and that those incarcerated for something that is now seen as legitimate entrepreneurship should be released.”

McCauley’s son, Ethan, was in kindergarten when his father went to prison. He will graduate from high school in May.

“I look forward to the day,” he said, “I can hug my father and talk without a time limit.”