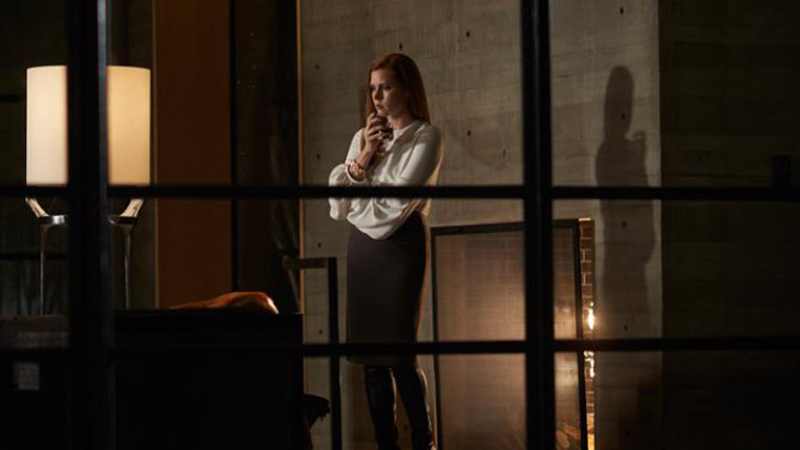 In close-up — and in extreme slow motion — a handful of obese, nude women stare directly into your eyes. They blow kisses and pucker their gaudy red lips over Max Richter’s neoclassical music. One of them clutches an American flag. Another waves sparklers. They wear marching-band hats and boots, but the focus is clearly on the slow-motion ripples and scars of their exposed flesh. This is the zero-context opening-credits sequence of Nocturnal Animals, and it gives you plenty of time to ponder what director Tom Ford means, and to wonder what he’s about to do.

Nocturnal Animals, which opens Friday, is Ford’s follow-up to his 2009 debut, A Single Man. The latter is an achingly sensitive portrayal of a gay college professor (Colin Firth), a heavily stylized film with exquisite art direction and design. His new movie is its emotional opposite. Nocturnal Animals goes for the jugular in every way. Yes, it too is beautifully designed, but every character in the movie — not just the “fictitious” ones who appear in its story-within-a-story narrative — seems to exist solely as a nihilistic provocation.

Ford, who made his name as a hugely successful fashion designer, has said that Nocturnal Animals, based on the 1993 novel Tony and Susan by Austin Wright, is a very personal film. By changing the profession of the book’s Susan (Amy Adams) from an English professor to an art-gallery owner, he has placed her in a world more like his own. Taking him at his word, then, you figure that Ford must harbor a deep-seated contempt for people in the fashion industry. All of the upper-class elites surrounding Susan are shallow, pretentious fakes, including her cheating husband, Hutton (Armie Hammer). At night, she gazes out the windows of her ultra-modern, multimillion-dollar, gated Los Angeles home, contemplates her empty life, and wonders where it all went wrong.

Goading this self-examination is a manuscript that Susan receives from her ex-husband, Edward (Jake Gyllenhaal): a novel dedicated to her. It comes to life onscreen as she reads it, with Edward as Tony. And writer Edward turns out to be as crippled by self-loathing as Susan is: He sends his sad-sack doppleganger into a whole heap of trouble with some rowdy redneck boys — led by Ray (Aaron Taylor-Johnson) — on a remote Texas highway, where he finds himself powerless to defend his wife and their daughter. Soon, Det. Bobby Andes (scene-stealing Michael Shannon) enters the picture to show Tony what a real man does to protect his family.

An alternate title for this stylish, button-pushing neo-noir — and this will set off a red alert for many viewers — could be Awful People Doing Awful Things to Each Other. I truly believe that it’s Ford’s intention for us to sympathize with his “characters.” But rather than see them as real people living multidimensional lives, we best approach Susan, Hutton, Ray, Bobby and Edward-slash-Tony as archetypes — more specifically, as send-ups of our own failings and insecurities and fears. If you can hold Nocturnal Animals at that clinical distance, then its total abandonment of realism propels you into a heightened, pitch-black revenge comedy, one that can be savored for its array of grotesques and exaggerations on both sides of its dubious moral line.

Such a reading may not be what Ford has in mind, but his story-within-a-story structure allows our only real emotional investment to be with Bobby. Shannon’s detective is so enigmatic — and such a welcome relief from Gyllenhaal’s blubbering Tony — that it’s impossible not to get excited every time he’s onscreen. And it’s in Bobby’s scenes that the suspense and dread Ford summons with his boilerplate big-city-meets-rural-backwater nightmare pay off.

When the film reverts back to poor Susan reading Edward’s novel, we’re reminded that it’s just a story. And we suffer through hard-to-swallow flashbacks of the idealistic, younger versions of Edward and Susan, when they were in love and insufferable. Betrayal and bitterness lurk, but there’s far less suspense in these scenes.

So that opening-credits sequence turns out to be a microcosm of Ford’s whole film. Nocturnal Animals is a jarring, uneasy social experiment that dares you to keep watching and subverts traditional “hero’s journey” storytelling modes thoroughly, if very obviously. Audiences will no doubt be polarized. Some will brush it off, unable to feel anything for the characters. Others will be thrilled, as I was, by its uncompromising meanness and self-indulgence. Whatever Ford set out to do with Nocturnal Animals, it arrives as the first white-hot denouncement of both sides of the culture war in our new Trump Bizarro world. It argues that petty revenge is one way to deal with crushing guilt. That’s no cure for feelings of, say, overwhelming failure, but it’s a very effective salve.