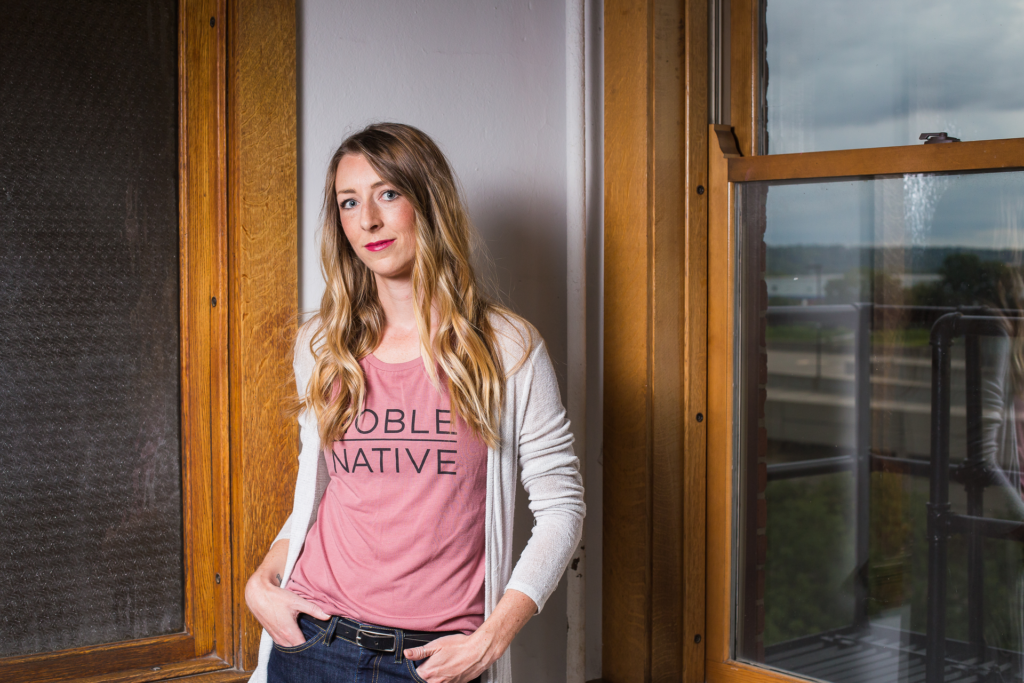 It calls to you: the discount rack at the cheap clothing chain. You heard that siren’s cry in April, and you bought a few cheap tops at a big-box store. Now they’re unraveling in the dryer and you’re binge-browsing closeouts all over again in September, knowing you’re doomed to keep repeating the cycle.

Sarah Hicks wants to free you from that loop.

“Fast fashion is cheap for a reason,” Hicks tells me. “The workers that are making this cheap clothing are being taken advantage of. That’s the only way you can make cheap clothes, is not to pay the workers a living wage.”

Hoping to create a more socially conscious place to shop — and to stock affordable items made to last — Hicks launched Noble Native in May 2016. She says everything in her online boutique is sustainable (that is, the clothes are made from recycled or biodegradable materials) and has been produced by an ethically responsible company (short version: zero child labor). In addition to her online store, Hicks also puts on regular pop-up shops around town. Over the summer, she shared a space with MADI Apparel on the West Side. This fall she has pop-ups planned at Urban Provisions in the East Bottoms and the Hair Parlour in the Crossroads’ Bauer Building. And she emphasizes local talent.

“Kansas City hosts so many wonderful independent and emerging designers that I really wanted to create a business that celebrates both sustainable brands as well as emerging designers,” Hicks says. Some of her favorite locally made items right now include repurposed vintage Indian saris from April Madden Studio; beaded jewelry from Sarah Cramer and Whiskey and Bone; denim and chambray garments from Chamchamqueen; and pillows from Heidi Herrmann, who is best known for her dresses featuring images of iconic Kansas City landmarks.

Most of the clothes Hicks sells share one elemental trait: They are basic items that can be worn with a lot of other things in a lot of different ways.

“I don’t sell anything that’s particularly jump-out-at-you fabulous,” Hicks says. “Audrey Hepburn was the pioneer of the little black dress. That one dress you can style 12 different ways is much better than owning 12 different dresses that you might wear once a year. You hear people talk about the French girl’s capsule wardrobe, and that’s what that is.”

These minimalist, versatile garments encourage sustainable shopping habits as well: Purchasing four or five well-made but higher-priced staples, she says, ends up being less expensive than snatching up trendy knockoffs every few months. She knows that many people are addicted to bargains for a good reason — because they’re bargains — but she makes a convincing case for moving toward sustainable shopping.

“I realize that making the switch from shopping for what’s a good deal to shopping with sustainability in mind is hard, because it really is an entire lifestyle shift, in essence,” Hicks says. “But the least expensive clothing to manufacture is clothing that’s made with non-biodegradable materials. So your dress might only be 40 bucks at Target, but I guarantee it’s being made with material that will never break down and will sit in a landfill until the end of time. I don’t know of anybody who can feel good about that.”

But if you lack an environmental conscience, there’s still the thrill of the hunt.

“I only sell limited quantities of each of my items,” Hicks says. “My selection turns over quickly — often I’ll only have one piece of each size, so if you see something you like, snatch it up.”