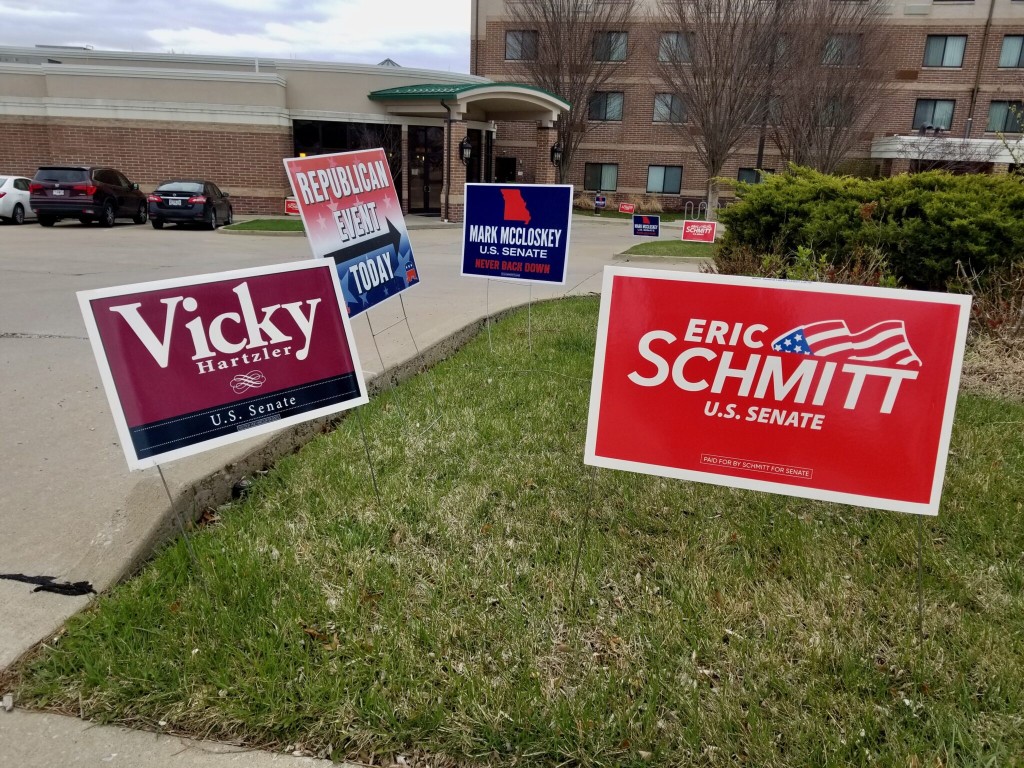 Up to that point, there had been no trace of Greitens or his campaign at the most important pre-primary gathering of party faithful in the county where a court will weigh the explosive charges of domestic abuse from his former wife.

No Greitens yard signs greeted those attending, as they did for other major candidates in the race. No literature adorned the dinner tables. And no one was wearing his campaign paraphernalia to identify themselves as a supporter.

All of the leading candidates were invited to make five-minute speeches, Rathert told the gathering of about 200 of the county’s most ardent party members. U.S. Reps. Vicky Hartzler and Billy Long were there, as was St. Louis attorney Mark McCloskey, but Rathert said he was calling names in alphabetical order.

“Eric Greitens?” for the third time.

Still no Greitens. Then Rathert called for Hartzler, who has represented the county in Congress since 2013 and greeted the crowd as a frequent visitor.

“It is so good to be home and to be with you all tonight, a group of patriots who are fired up and ready to take back their country, aren’t we?” she said.

The annual county Lincoln Day is a mainstay of retail campaigning for Republican primary votes. For statewide and regional candidates, it is a place to meet local party activists or reconnect with a reliable base of support.

Long used humor to introduce himself, reminded the crowd that former President Donald Trump recently praised him in a statement short of an endorsement and trolled rivals who have courted Trump’s attention.

“Nobody’s been closer to him than me,” Long said, “And some of the other candidates, I mean, they’re hanging around like bad breath at Mar-a-Lago.”

McCloskey rattled through his speech at break-kneck speed, taking the audience through a denunciation of Democrats as America-hating Marxists bent on undermining democracy to warning about “the Great Reset” and reminding them how he came to prominence – standing alongside his wife with firearms outside their St. Louis home as Black Lives Matter protesters marched by.

Because Hartzler must give up her seat as she runs for Senate, Friday night also featured speeches from five of the eight GOP 4th District candidates. Two — state Rep. Sara Walsh and former Boone County Clerk Taylor Burks — were jockeying for hometown support. The others in attendance were state Sen. Rick Brattin and former Navy officer and Lee’s Summit police Bill Irwin both of Cass County; and Kalena Bruce, a CPA and cattle farmer from Cedar County.

All candidates filed without knowing the eventual boundaries of the district. Lawmakers have been unable to agree, and a Senate-passed map would divide Boone County, putting the residences of Burks and Walsh into the 3rd Congressional District.

Both candidates for state Auditor, state Treasurer Scott Fitzpatrick and state Rep. David Gregory, also showed up to take advantage of their five minutes. Incumbent Nicole Galloway, a Democrat, is not seeking re-election.

Greitens has spoken at a handful of Lincoln Day events. He was the only Senate candidate to speak at the March 26 Dunklin County Lincoln Days.

He participated in multi-candidate events last year but has not done so this year.

McCloskey, who along with Hartzler and Long spoke April 2 at the Taney County Lincoln Day, said he hasn’t seen Greitens at any multicandidate events since last fall.

“He apparently decided if he was going to be treated like everybody else, he wasn’t going to participate,” McCloskey said.

It came as little surprise that Greitens avoided the county that is the eye of the hurricane that has engulfed his campaign over the past two weeks.

On March 21, Sheena Greitens filed an affidavit in Boone County Court accusing her former husband of physically assaulting her in 2018 and striking one of their sons so hard in 2019 that a tooth had to be surgically removed.

The underlying case is about a legal issue – should jurisdiction over the parenting plan that was part of their divorce be moved to Texas, where Sheena Greitens lives and where the children go to school, or remain in Boone County, where it was filed while she was on the University of Missouri faculty.

But it threatens to undermine the race Greitens saw as his political redemption. He is the only Missouri governor to resign, leaving office June 1, 2018, under a cloud of suspicion from allegations of violent sexual misconduct and campaign finance violations.

Criminal charges were dropped in exchange for his resignation and Greitens claims the entire episode was a conspiracy created by his enemies. He’s blaming former presidential advisor Karl Rove and Senate Majority Leader Mitch McConnell of concocting the latest charges, accusing his ex-wife of lying in the sworn statement.

Greitens is trying to subpoena phone records for Rove, Sheena Greitens, her sister and political consultant Austin Chambers searching for evidence to back up his claims.

Greitens supporters aren’t ready to abandon him yet, said Roger Fries, a member of the Boone County Republican Central Committee.

“I think people are taking a wait-and-see attitude, to see what happens to him and his ex-wife,” he said.

The GOP nomination to replace retiring U.S. Sen. Roy Blunt is one of the most coveted Republican ballot spots in years. Voting trends over the past two decades have given Republicans a clear starting advantage in fall elections.

But Republicans also remember sending damaged nominees into general elections in 1992, 2012 and 2018, easing the Democratic nominee’s eventual path to victory.

There are 21 names on the Republican Senate primary ballot, and the six highest profile candidates are registering support in recent polls. Hartzler, Greitens and Attorney General Eric Schmitt have consistently been receiving the highest support, with Long, McCloskey and Senate President Pro Tem Dave Schatz in the single digits.

Speaking to reporters, Long said the Senate primary could be won with as little as 21% of the vote.

In the 2016 primary for governor won by Greitens, four candidates each had at least 20% of the vote, with Greitens taking just under 35% for the win.

“People are afraid,” Fries said, “that is going to happen again in this primary.”