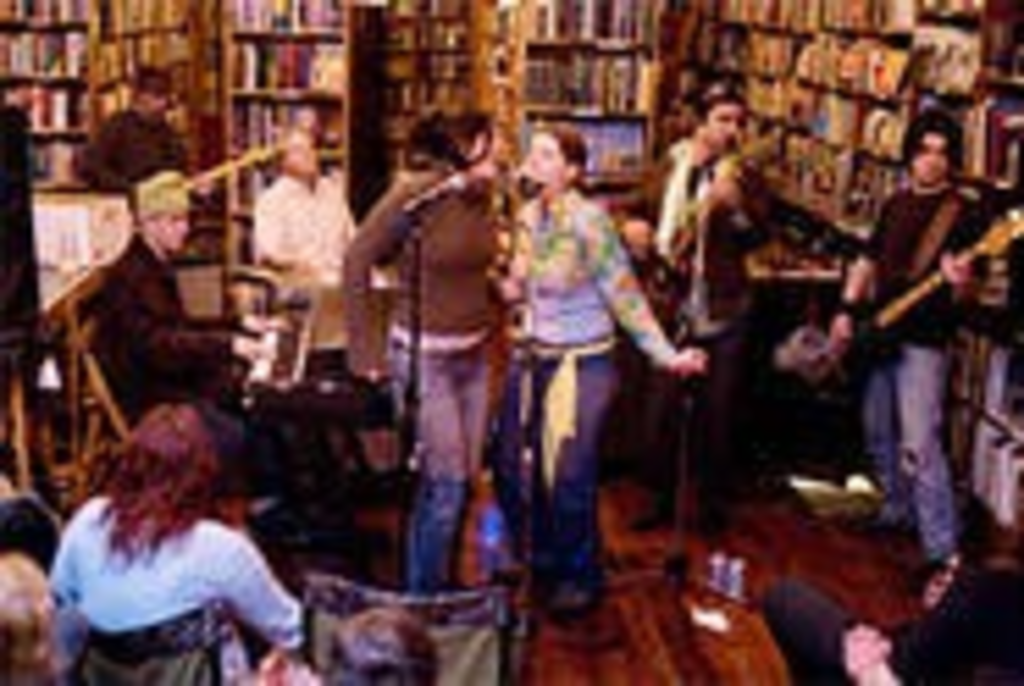 This year, a slew of amazing records came out that mostly (or only) Kansas City music fans got to enjoy. And this is during a time when the traditional, album-oriented global music scene is giving way to a song-based download culture. So cheers to the bands below, all of which looked adversity in the face and cut records that would sound good in any city, any day.

The Afterparty, Under the Rainbow (self-released): If Jack Kerouac’s ramblings could somehow have taken him to our modern-day Kansas City Crossroads District, the Afterparty would have shown up somewhere in On the Road. Aside from a Dixieland-jazz breakdown on “Los Hombres Miserables,” Under the Rainbow relies on classic country and ’50s crooner ballads (there’s even a broke-ass cover of Roy Orbison’s “In Dreams” on the disc) to summon a Beat Generation spirit, bringing frivolity and passion to the same late-night, ashtray-and-empties-laden bar booth.

Listen to “Storms Never Last” from The Afterparty.


Overstep, Laughter After Disaster (Anodyne): This fast, cheap and out-of-control CD was recorded over a couple of days in August while Overstep (which pretty much broke up after 2003’s The Bullring by the Sea) drummer Alex Organ was in town from his home in San Diego. The pace must have been grueling for Organ, who has multiple sclerosis and sometimes has to duct-tape the drumsticks to his hands in order to keep going, but whatever suffering he endured was worth it. There’s not a bad cut on this seven-song rock-and-roll bank robbery. Frontman Adam Stotts’ unrestrained voice rides his and Duane Trower’s echoing, dissonant guitars like a bullet casing — tight and mean. When he howls, on the barn-burning “Midnight Rider,” When I was 20/I knew what I wanted/Now I’m nearly 30/Let the lights go out, you know that age has made him wilder, not wiser. Laughter after disaster — fuck yeah to that.

Listen to “Midnight Rider” from Overstep.

In the Pines, In the Pines (Second Nature): In the Pines’ long-awaited debut is a tour de force. The songs that have been wooing local audiences for the past two or so years are all beautifully tracked, with the band’s instrumental formula of acoustic guitars, trap set and heady violin or viola reined in to produce a masterpiece of chamber-music folk that evokes an elemental, rural America of wood, water, earth and steel. The character that In the Pines sets out across that landscape is the composite voice of the band’s four male and female singers — a creature weary, bereaved and endlessly searching. This isn’t an album; it’s a human drama.

Listen to “Why” from In the Pines.

White Whale, WWI (Merge): While much of the year’s indie rock strived for stripped-down, whiny hipster nonsense or new-wave nostalgia, White Whale steered for the majestic — and reached it without becoming precious or fey along the way. WWI is a remarkably fresh debut for a crew made up of old hands (Matt Suggs of Butterglory and solo-artist fame, Rob Pope of the Get Up Kids, et al.). “Nine Good Fingers” and “What’s an Ocean For?” proffer instant appeal, but the rest of the album’s obscure nautical themes and compositional structures demand patience before delivering the goods. Case in point is “Yummyman Farewell,” on which a full minute of buildup with drowned vocals gives way to the catchiest, most driving three minutes of the album. This isn’t a cod filet; it’s a whale — it takes time to digest.

Listen to “What’s an Ocean For?” from White Whale.

Ad Astra Per Aspera, Catapult Calypso (Sonic Unyon): Lawrence’s Ad Astra Per Aspera exhibited unfortunate prescience in naming itself after its home state’s motto (To the stars through adversity). After four years, two EPs and more shows than some bands play in an entire career, Ad Astra has a label-supported, debut full-length to be proud of. Stuttering beats, sugar-rush guitars and startling vocal outbursts rule the day on Catapult Calypso, making it an album for anyone who wants to like Sonic Youth but wishes that band would quit acting all stoned and fucking tear shit up.

Listen to “Voodoo Economics” from Ad Astra Per Aspera.

The Architects, Revenge (Anodyne): Fists up but trampled down, savage but soulful, this album, if heard before bedtime, could give you dreams about being slammed across the hood of a cop car and getting cuffed just for having a good time. That’s pretty much what happened to singer Brandon Phillips when the Architects played a party in KCK earlier this year and strippers showed up, followed by cops. Phillips ended the night with a trip downtown in a police wagon. We don’t have to go through all that, though; this record is a year’s worth of vicarious rebellion.

The Pomonas, When You’re Electric (self-released): When You’re Electric is for people who, as kids, preferred the Monkees to those artificial Power Rangers. It’s also an album for grown-up music lovers who think that words such as catchy and pop don’t mean much unless there’s plenty of sweet guitar in the context. In another era, our most underrated local band would have been a pack of bona-fide heartthrobs, never appearing in a teen-magazine pictorial without matching suits and British amps. Unfortunately, it’s 2006, and not that many people heard the Pomonas — but those who did got electric.

Super Black Market, Will Sell Anything (Minnow Records): Warrensburg punks, whadda they know? A little bit, it turns out. They know that it takes more than three chords, a four-four beat and churlish disregard for authority to get people’s attention. Either that, or it’s just happenstance that led Super Black Market to inject about 50 CCs of irony into the flanks of its out-of-control, riffs-and-screams steed before riding it to the hoedown of disaffected youth. The lyrics are frat-boy simple (there’s going to be a party TONIGHT!), but the metal-tempered rock would interest fans of Thin Lizzy and Fugazi alike. Smartest of all, Super Black Market jumped right on with a local label and made a powerful, good-sounding record to shove down the throats of the media-addled masses.

Listen to “There’s Going to Be a Party…” from Super Black Market.

The Esoteric, Subverter (Prosthetic Records): Its not the job of young, regionally popular metal bands to be innovative, progressive or appealing to anyone outside their white, adolescent, male fanbase. Evidently, local favorite the Esoteric had ambitions grander than setting a few Midwestern all-ages venues ablaze when it went in to record Subverter, because the band came out with a hardcore-rooted, devil-music epic that’s fashionable enough to keep the kids’ heads a-banging but classic and intricate enough for the horn-throwing connoisseur. Opening one-two punch “Destroy, She Said” and “Science Is Sexy” demonstrate enough ass-kicking conventional metal wisdom to deserve a spot between Motorhead and Pantera on late-night radio. Then, as if to mix it up, demonic ballads “Shipyards of Foreign Cities” and “Don’t Waste Guts” (featuring gothtastic guest vocals from the Roman Numerals’ Steve Tulipana) sprinkle a little romance into the hellfire.

Listen to “Destroy, She Said” from Esoteric.

Roman Numerals, Roman Numerals (Anodyne): Most bands riding the retro-electro-rock wave have members with all-’80s birthdates. So don’t yell poseurs! at your elders in the Roman Numerals — they’re playing the kind of music they actually grew up digging. The Nooms all have track records that include time in post-hardcore projects (Shiner, Season to Risk and Dirt Nap, to be specific) as well as thousands of hours logged behind turntables at the most popular DJ nights in town. (Is there anyone who hasn’t boogied down with Steve Tulipana’s and Shawn Sherrill’s Strange Bedfellows?) Therefore, Roman Numerals is a natural blend of the jagged rock and danceable grooves that the band’s members have dealt in since cutting their musical teeth in the ’90s. So it’s no fly-by-night study in trend following. That’s why — along with our favorite New Order and Psychedelic Furs tracks, which still sound fresh — we’ll be coming back to this record 10 years from now.

Listen to “The Rule of V” from Roman Numerals.