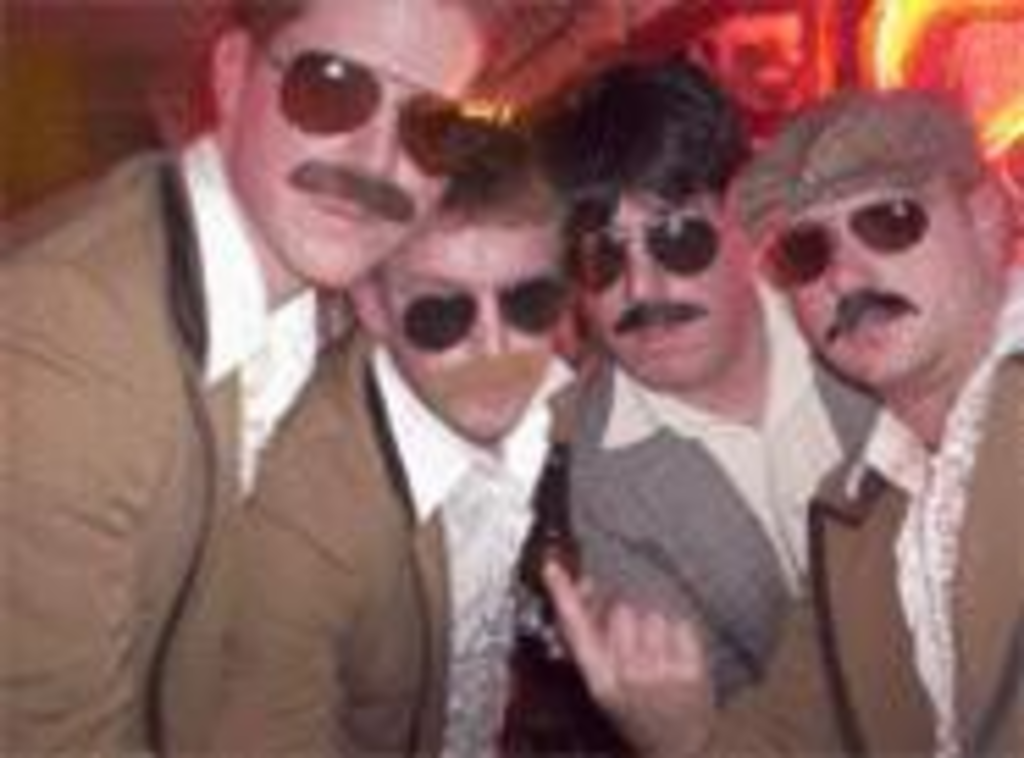 Junior high was a wretched experience for us.

Back in the day, this young Night Rangerette was a horribly awkward preteen with a bad perm, oversized glasses and teeth that didn’t just need braces — the orthodontist even gave her headgear. Add to that the fact that she attended a snobby private school, and is it any wonder that she now drinks for a living?

One thing we do miss from those years, however, are the field trips. So when we heard about an adult version— a drink-filled bus ride to the Chubby Carrier show at Knuckleheads Saloon on December 2 — we got our permission slip signed and got aboard.

It all started when we got a call from 26-year-old Jonathan, a guy we met when we interviewed him for this column awhile ago. He and his buddy, 26-year-old Tom, came up with the plan to predrink on the bus as it circled around town before the show. Jonathan’s sales pitch was perfect: “How can you turn down a bus full of booze with a fun and wild young crowd and then dancing the night away to a zydeco legend?” The price was right, too: $31 covered the ticket and the drinks on the bus and even included a souvenir T-shirt that proclaimed, “I went to a concert and all I got was a damn Chubby.”

The best part of the trip, though, was the dictate to dress in ’70s funk gear, which was inspired by Chubby’s penchant for donning an Afro wig onstage. Hey, we’re all about the theme-dressing, so on that Friday night, we made our way to the appointed meeting spot of the Plaza Granfalloon with Research Assistant Cece. The Night Ranger herself was ready to go in her vintage neon-green shift dress and clogs.

Of course, our fellow travelers stood out among the usual striped-shirt Granfalloon crowd. Surprisingly, more guys than women had dressed up. The men had gone all out, with Afro wigs, clashing plaids, wide-collared shirts unbuttoned down to there, huge faux-gold medallions, tight polyester pants, and garishly colored tuxes. The ladies went for the polyester dresses emblazoned with neon floral patterns not normally seen in nature, accessorized with wide headbands, Jackie O shades and boots. In the backroom sat scores of middle-aged, touristy-looking folks eating dinner. They looked slightly bewildered by the invasion of what probably seemed like a fraternity mixer.

As we predrank at the Granfalloon, we chatted a bit with our incredibly friendly and outgoing bus passengers. Tom and Jonathan had gathered a group from various facets of their lives — high school, college, work, friends of friends. Most were in their mid- to late twenties, so the vibe wasn’t cliquish. After a couple of drinks, our group of around 60 boarded the bus, which turned out to be a plush ride, complete with small TVs and a bathroom. The guys toted coolers onboard and passed out 16-ounce cans of Keystone Light. In flight-attendant style, our hosts also walked the aisle offering Franzia box wine. Our grouchy bus driver, who apparently had driven straight from Branson that day, initially refused to turn up the music. After some convincing in the form of a $20 bill, “My Humps” blared from the speakers, and we embarked on our journey to the East Bottoms.

We took the scenic route by Union Station and the mayor’s Christmas tree in front of Crown Center. As the windows fogged up, the beer kicked in. The scene on the bus was still fairly mellow — no wild dancing in the aisle, no puking in the bathroom. An hour after our departure from the Plaza, we arrived at Knuckleheads, whereupon we all made a beeline for the restrooms, our bladders painfully filled with cheap beer. (Really, who wants to pee in a bus bathroom?)

We arrived just in time for the show, which rocked. Chubby’s rendition of “Who Stole the Hot Sauce?” included the band pouring slugs of the red stuff down people’s throats from a bottle. Between songs, we mingled with the crowd and talked to some of the more colorfully dressed bus passengers. That’s how we met 26-year-old Tim, a sales rep for Black & Decker who is a friend of one of Tom’s co-workers. He wore a peach-colored ruffled shirt under a burnt-orange tuxedo; on his head sat a matching tangerine wig. Originally from Tampa, Florida, he came to KC for work and has been here for two years. We asked his thoughts about our city, curious as to whether he’d go all Larry Johnson on it.

“It’s different. It’s good,” he replied. “It took a lot for me to fit in, since I’m not from the Midwest — I’m from the South. I’m a little too friendly. Not like people aren’t here, but they think I have an angle, and that’s not the case.”

“Oh, don’t you?” we asked flirtatiously.

Also rocking the tuxes was a foursome who dubbed themselves “The Five Tenors.” Claiming to be an a cappella group touring Missouri, they wore matching tan tuxes and white ruffled shirts. Cop sunglasses and fake bushy mustaches covered their faces, but they told us that they weren’t aping the Beastie Boys in their “Sabotage” video. Keeping up the charade, they spoke in flat, Jersey accents.

“There are only four of us,” said Mark, the one with the blond mustache. “The fifth one died in a plane crash.” He randomly turned around and showed off his ass. “Look at that beautiful butt,” he said. Then he mumbled something about wearing women’s pants.

Their manager, Sal A. Mander, tried to get in on the myth.

“One of the guys died from a drug overdose,” he told us.

“I thought it was a plane crash,” the NR said, her investigative skills dulled not one whit by beer.

“It was a drug overdose, then a plane crash,” Sal answered solemnly.

“What are you doing later? Want to hang out?” Mark drunkenly entered flirt mode.

We evaded his advances and turned our attention back to the show. Around 1 a.m., with the concert over and the lights up, we boarded the bus. Our numbers were depleted because many had left with friends who drove separately. Too bad — the bus ride back is usually the best part of a field trip. Our return ride was quiet, though, and by the time we got back to the Granfalloon, a number of guys had passed out.

“Is this the best December 2 that you’ve ever had?” asked a still-boisterous guy named Doug, his Afro askew.

Republican Roy Blunt will not be running for reelection in 2022