No guitar? No problem — if you have the nerve to let it rip on an air ax. 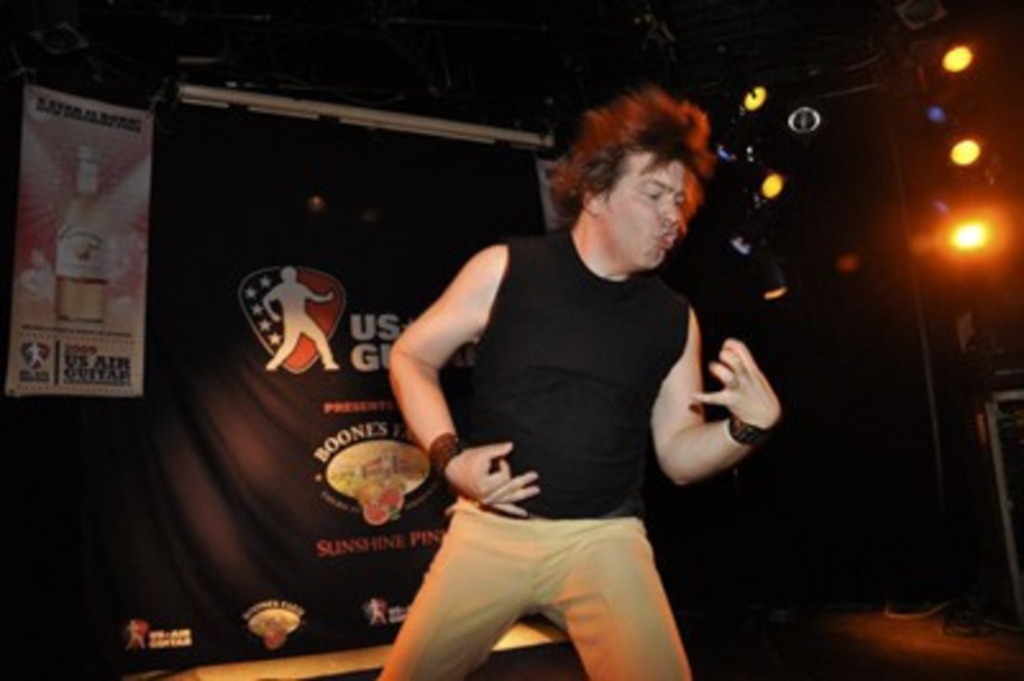 We’ve all done it. The Van Halen is loud, the place is all yours, and so you jam a little air. More than a little — you wail on that invisible ax, your features distorted in guitar-solo concentration. Let the pros waste their spotlight turns thinking about the groupies and cold cuts awaiting them after the show. You feel the music. For you, it’s pure love, pure rock, pure whammy-bar wang.

Then the door opens, and before you can turn down the volume and straighten up, you’ve been outed.

Oh, not you? Whatever. Let he or she who is without air sin cast the first air stone.

And for the sinners, there’s now a sanctioned air-guitar event. Just ask Eric “Mean” Melin. He’s on his way to becoming an air legend.

Last Tuesday night at the Record Bar, Melin rocked so hard, he split his pants. The crotch of his pants. With no real guitar to cover himself. Lucky for the crowd that witnessed his bust-out, he’s Mean Melin, not Commando Melin. But anyone who was there to see Melin’s tighty whities (including Pitch staff writer Justin Kendall, who has been covering Melin and the local air-guitar scene) knows that the man has no shame.

Going into Tuesday night’s regional contest, Melin was banged up. He had bruised his foot the night before while practicing on his deck and, at first, couldn’t walk on it. But adrenaline, tape and a few beers numbed the pain.

Melin had serious competition. Even with two good feet, it would take steel nerves and strong imaginary steel strings to face off against the likes of Hammerin’ Cock and Thunderin’ Ballz, not to mention Long Bottom Leaf, Banana Man, Dirk Tickler, Motley Cruz and Satanica. But there was no breaking him. During Melin’s 12-second run through Motorhead’s frantic “Ace of Spades,” he windmilled, played over his head and slid on his knees (that’s when he ripped his pants). The judges gave him a perfect score, and by the end of the night, he had overcome a bum foot and every impulse to protect his own dignity in order to walk away the winner.

The prize: a ticket to the big show, the U.S. Air Guitar Finals in Washington, D.C., where the pantomime combat is sure to be on a whole other level. So Melin will spend the next couple of months practicing his air ax and putting together a sturdier wardrobe. The yellow pants with the ripped-out crotch? Man, if those pants could only talk.