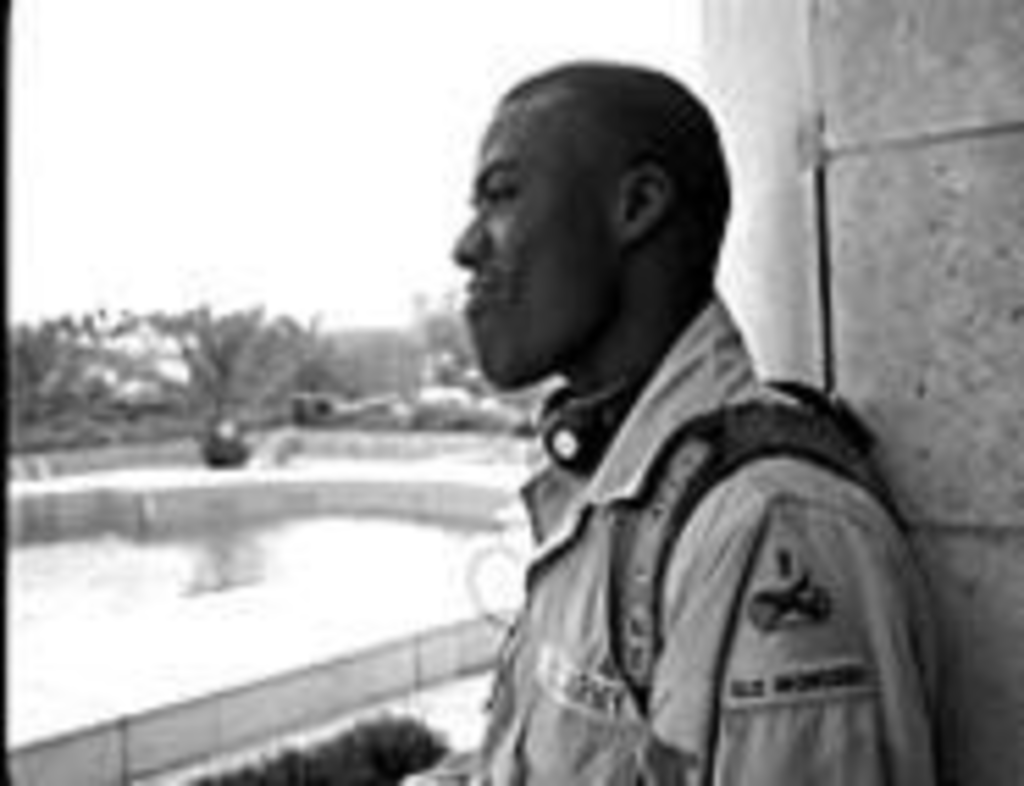 Everyone with a TV remembers President Bush’s aircraft-carrier landing, after which, wearing a flight suit, he stood in front of a “Mission Accomplished” banner and triumphantly declared that major combat operations in Iraq were over. Nearly two years on, many feel like asking what exactly he meant by that.

Gunner Palace makes no bones about it. Opening with footage taken in Iraq on September 5, 2003, the film informs us with subtitles that what we’re seeing is, according to Bush’s declaration, “minor combat.” To the U.S. soldiers, it makes little difference: They’re still being shot at by an enemy they have trouble pinpointing. The soldiers find themselves having to become a combination of social worker, peacekeeper and politician — in addition to being able to shoot back when shot at.

Documentarian Michael Tucker made two trips to Baghdad, where he stayed with the troops in a bombed-out former residence of Uday Hussein’s that had been converted into a barracks and renamed Gunner Palace. Complete with three putting greens, a fishing pond, a large swimming pool and the highest ceilings most of the military men have ever seen in their lives, it’s described by one man as “an adult’s paradise,” although alcohol is banned and sex is only hinted at.

As we tag along with Tucker on midnight raids of suspected terrorist households, watch soldiers look after abandoned war orphans, see them train Iraqi civil-defense forces and hold up traffic while they check for explosive devices, you may wonder: Why don’ t we see this kind of thing on the news every night? Undoubtedly military censorship comes into play, but probably more to blame is the prevailing notion that talking-head shoutfests stacked with pundits bring in the ratings. Actual field reporting costs more money.

It will be an interesting world if we have to start depending on movies for the real story. Secretary of Defense Donald Rumsfeld recently got into hot water when a soldier questioned him about having to armor military vehicles with scrap metal; Tucker’s footage proves that this was an issue two years ago when one soldier demonstrates (much to the amusement of his colleagues) how the new panels he culled from a junk heap will keep the shrapnel in your body rather than having it blow clean through.

The film’s most notable character, Pfc. Stuart Wilf, is introduced wearing a T-shirt that reads “My ass stinks like shit” and later is seen experimenting with new flavors of macaroni and cheese, putting a mop on his head to impersonate a Sunni cleric, and bonding with an elderly Iraqi dubbed “Basil.”

“We both want to fuck,” explains Basil.

“Not each other!” clarifies Wilf, who will later suggest, half-jokingly, that his military service might qualify him to be president someday.

Wilf’s an entertaining guy, so it’s no surprise that Tucker’s camera is drawn to him. It is a narrative weakness of the film, however, that none of the other characters come through quite as well — when a major death happens off-screen late in the game, we don’t feel it because the deceased hasn’t been on camera much. Every death counts, so it’s unfair to judge individual casualties as though they were characters in a movie, but one can only consider the loss intellectually if nothing visceral has been provided.

What may surprise many viewers — especially those with no direct connection to the military — is the degree to which the soldiers seem anti-war by the movie’s end. Several go on record saying, more or less, that there is nothing that can be gained by taking any human life. Others merely wonder why they spent so much time destroying a country that they now have to rebuild or inquire about what exactly will define victory. Though specific left or right political sides aren’t taken, Rumsfeld’s name eventually starts to evoke derision every time it comes up.

Doesn’t seem like we have any good answers for them. But we could start by paying attention to their stories.