Ninja Moose Brewery is for real in Hamilton, Missouri

Every day, Scott Falke makes the 45-minute drive from his Liberty home to Hamilton, Missouri, a small town of 1,800 people where he decided to plant his Ninja Moose Brewery.

If the location and name sound odd (and sound even odder together), well, they are. But, as Falke explains, production breweries can be anywhere.

“If you’re a production brewery, it doesn’t matter where you are,” he says. “I looked at renting a couple of places down in Liberty, but what I’d pay in two years in Liberty, I could buy a building, completely renovate it and basically build a brewery and never have to pay rent.”

So in July 2013, Falke bought the boarded-up old telephone-company building at 105 West Bird.

“We just took it down to nothing but a brick shell and a dirt floor and built it back from there,” he says. “It’s come a long way.”

A U.S. Army reservist (he just received his 20-year letter), Falke decided, while spending 2010–11 serving in Afghanistan, that he wanted to open a brewery when he returned to the States. He had been homebrewing since 1992 but hadn’t made beer professionally.

“When I started working on my Ph.D. [at the University of Kansas School of Medicine], I really got into the science of the brewing process,” he says. “That’s when I really picked it up and got interested in it.”

When Falke returned home, he picked up his teaching gig at William Jewell College but didn’t stop talking about opening a brewery. Finally, his wife called him out.

“My wife just said to me, ‘Are you just going to talk about this for the rest of your life? Or are you ever actually going to do it?’” he says. “It was like, OK, game on.”

Falke quit his teaching gig in May 2014.

“This represents freedom, I guess,” he says, while sitting at the bar of the brewery. Classic-rock tunes — Pink Floyd, Bad Company, Led Zeppelin — play over the speakers. “This is the brewhouse that the Army built, really. We just saved all of my income from when I was over in Afghanistan and put it in the bank. This whole place has been built off that.” 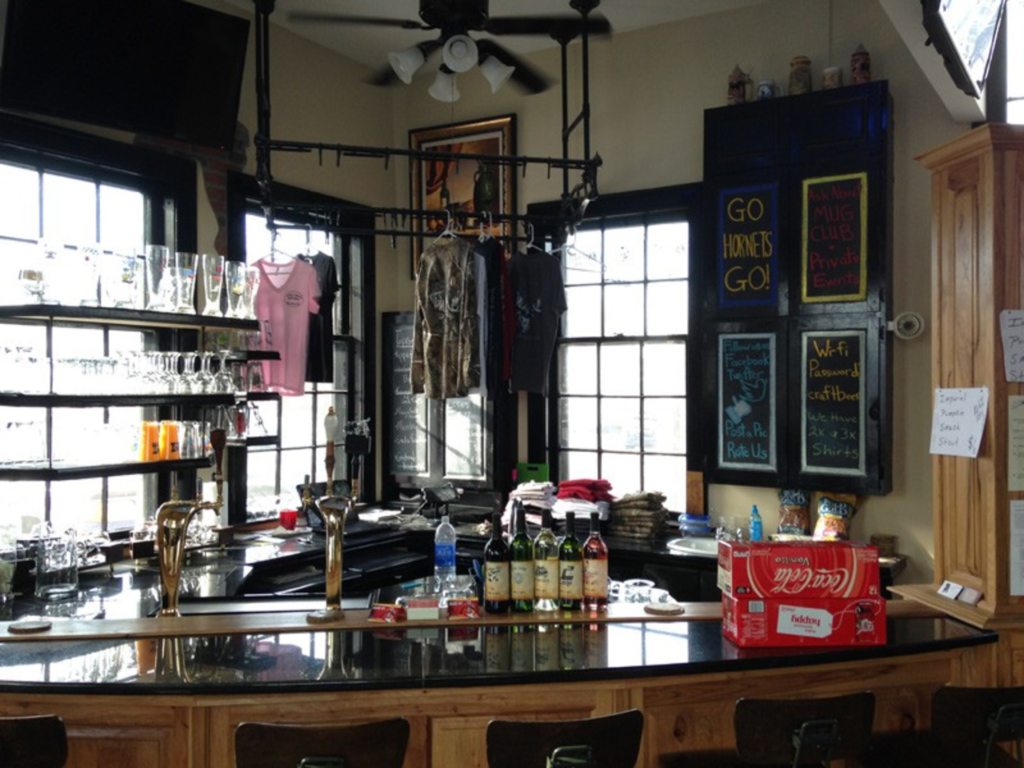 The taproom was never part of the plan. But it has quickly become a big part of Ninja Moose. He says the residents of Hamilton kept dropping by to tell him that they needed a nice place to have a drink.

“It became an ‘if you build it, they would come,’” he says. “It’s fun to get people in here and actually drinking something we’ve made. In a town this size, everybody knows each other. Anytime kids are home from college, their folks bring them in here. And we’re starting to pull people in off the highway a lot more now.”

But where did the Ninja Moose name come from? Falke admits that he had a bit of trouble reading a map while on a fishing and canoeing trip with his father, his uncle and a cousin.

“We were sitting on the banks of one of the lakes up there [Boundary Waters], trying to decide where we’re going to go, and I looked at the map, and I was like, ‘No way. These guys named a lake Ninja Moose Lake. You gotta be kidding me,’” he says. “My cousin’s like, ‘You idiot. It’s Nina Moose Lake.’ So I misread it on the map, and then it just kind of became this character. ‘Hey, watch out for ninja moose when you’re out today.’”

That character popped in his head when he was filling out the LLC paperwork.

“I couldn’t decide on a name, so I wrote Ninja Moose on there,” he says. “I stuck it on there and thought that I’d come up with a better name later on.”

Falke is brewing on a pilot system for now. He says he’d like to have a planned five-barrel system running by the end of the summer.

“I never brewed on a large scale before this,” he says. “I’m still not brewing on a large scale. We’re basically homebrewing in the brewhouse.” He laughs and goes on: “We’re making 15-gallon batches and putting them in 5-gallon kegs. Just enough to feed the taps in the taproom.”

Falke says his brewhouse will eventually have a 30-barrel capacity, but “it’ll take us awhile to get up to producing 30.” He has been brewing twice a day, every day, to keep up with demand. He admits that he struggled to keep his taps flowing early on, so he moved to the twice-a-day brew schedule for three weeks to catch up.

Ninja Moose’s beers fall into three categories: House (5 to 6 percent ABV), Premium (7 to 8 percent ABV) and the Hamilton Series (9 to 10 percent ABV), such as an imperial stout. (If you can’t stay in Hamilton, Ninja Moose offers 64- and 32-ounce to-go growlers.)

Falke plans to add a beer to his taps the first weekend of every month until all 12 taps are flowing.

“We’re paying attention to what people like, and we’ll make the beer that people want to drink,” he says. “Right now, we’re just fooling around with recipes.”

Once the recipes for his beers are finalized, Falke says he’ll start branding Ninja Moose’s beers. He expects that to happen sometime in the summer.

Last year, Falke launched a mug club. It sold out in less than a month, and now there’s a waiting list that’s 50-people deep.

Falke has expanded Ninja Moose’s hours, staying open five days a week: from noon to 8 p.m. Tuesday through Thursday and from noon to 10 p.m. Friday and Saturday (closed Sunday and Monday). The hours aren’t the only thing expanding. So is the brewery’s building.

“We’re getting ready to just about double the size of the building,” he says. “We’re planning putting an outdoor patio … we decided to close it in and just make that usable space year-round.

“We’re planning on adding 15 feet out to the west, the full length of the building,” he adds. “We’re also planning to add 20 more feet behind the building and going all the way across the north end of the building. That will all be production brewhouse.”

Falke hopes to have the foundation finished by sometime this summer.

“We’re just steadily moving forward, brewing every day just about, which is nice,” he says. “It’s what I love to do.”