It’s got blood, brains and felt. What more could you want? 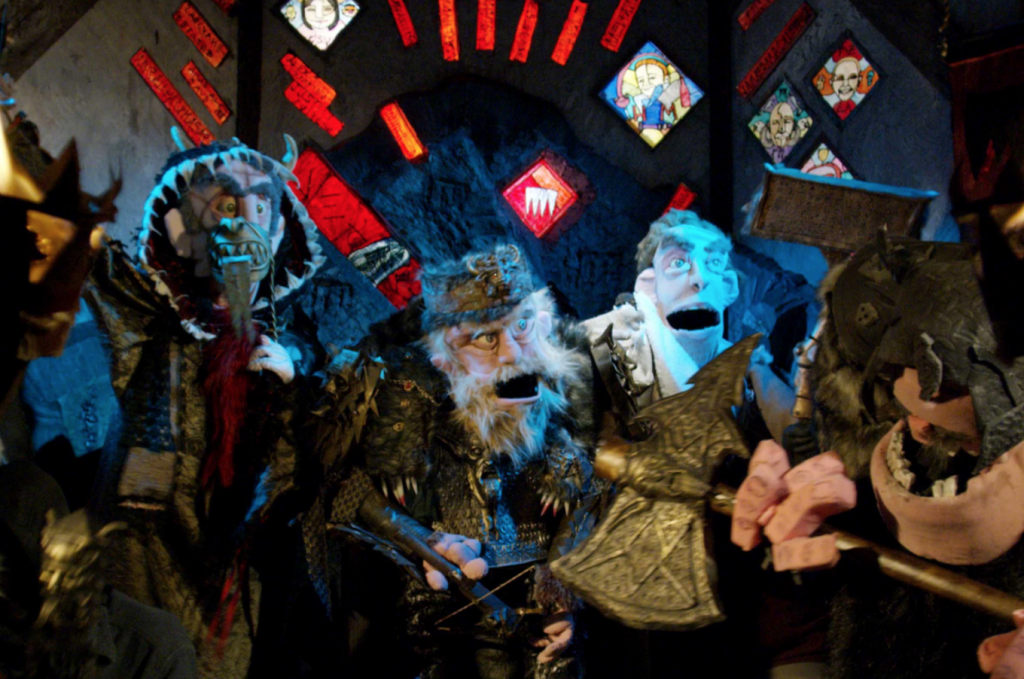 Cinematically speaking, there’s not much out there that can’t be improved by the addition of puppets. Fantasy? The Dark Crystal and Labyrinth. Family films? Follow That Bird and literally every Muppet film. Raunchy comedies? Team America World Police and Meet The Feebles. Abstract existential works from the mind of Charlie Kaufman? Being John Malkovich and Anamolisa have you covered. More than any genre, horror has embraced different forms of puppets and puppeteering to varying degrees of success, usually in the form of practical monster effects. It’s been a since a film primarily featuring puppets has burst onto the scene. Thankfully, Jesse Blanchard’s deliriously inventive, endlessly grotesque and stupendously enjoyable Frank & Zed is here to save the day.

Once upon a time, there was an evil that enveloped a small kingdom. With his back against the wall, a king was desperate for any kind of savior. The god of death promised to save the kingdom and keep the peace, as long as a male heir was there to take over the throne. If that didn’t happen, an orgy of blood would occur, sending everything into chaos. 200 years later, the royal bloodline is on its last legs. As is often the case, it’s not the threat of ancient evil that’s cause for concern, but the machinations of those craving power, setting in motion a plan that unwittingly involves Frankenstein’s monster and a zombie (the titular pair of buddies).

There’s an unexpected sweetness in the opening stages of Frank & Zed, where we get a sense of the symbiotic friendship between Frank and Zed. Their days are literally spent caring for one another. Trudging along, their routines are stagnant, but allow each other to live. It’s sad but heartwarming to see them go through the motions. When the pair deviate from their normal path, it sets off a chain reaction that will have dire consequences for all in the land.

Frank & Zed is a joy to behold. Thought and care goes into every stitched piece, crooked tooth and character movement. The craft is reminiscent of 2019’s lo-fi animated indie film Attack of the Demons, using an overlooked but inspired filmmaking style that’s lovingly informed by cinephilia and genre tropes. Yet where Attack of the Demons felt forced in its dialogue, Frank & Zed knows its tone and how to make it sing. Imagine something like the scope and vision of The Dark Crystal, but with a fraction of the budget. The feeling of joy radiating off writer & director Blanchard’s work is infectious and creates a viewing experience that you want to race to tell everyone about as soon as the credits roll.

As easy as it is to fall into hyperbolics with Frank & Zed, not everything is pristine. There’s a roughness to the script, but it’s relatively easy to overlook. This film took seven years to make, and the level of craft on display shows that, with more than a dozen animated characters, multiple sets and gallons of gore. Who would have thought that a small film, populated entirely by puppets, would be one of the year’s best films? If you can tune into the film’s charms, that’s exactly what’s here.

As surprising as it sounds for a low budget feature, Frank & Zed takes big chances that enhance the overall experience. A few of the swings, especially from a story standpoint, push the runtime a little past the point of safety. At 90 minutes, the middle section feels like it drags on the most. Thankfully it’s never dull or taxing.

Frank & Zed looks and feels like a film that could belong in the early Jim Henson canon (minus additional human characters). It comes across like an extended Muppet Show sketch, if Kermit and Company made their own Army of Darkness remake. It’s self-referential, irreverent and willing to push for laughs. The gags, in the form of physical comedy or repeated bits, feel a few decades old—both in a timeless and cringey sense. This may be the biggest sticking point, yet it absolutely works if you’re willing to buy into it.

This all may seem like faint praise, but to overlook this film would be a shame. It’s worth your time, and you’ll be kicking yourself for not getting in on the ground floor of its assured cult success. Works like this only come along once in a blue moon. Nothing can prepare you for the all-out insanity that is contained within Frank & Zed. Every few minutes the film flips and contorts itself to keep things fresh. New monsters or creatures pop onto the screen. Styles clash and blood flows. The desire to entertain here is a simple idea executed impeccably.

Frank & Zed is an astonishingly original, unique and hilarious film. Its sense of humor is a little long in the tooth, but it leaves an impression you’re not soon to forget. With a healthy dose of ingenuity, not to mention a truly gratuitous amount of gore, it’s sure to find a devoted following. Hopefully, that will ensure Blanchard and his talented team get to make more (and bigger) films like this.