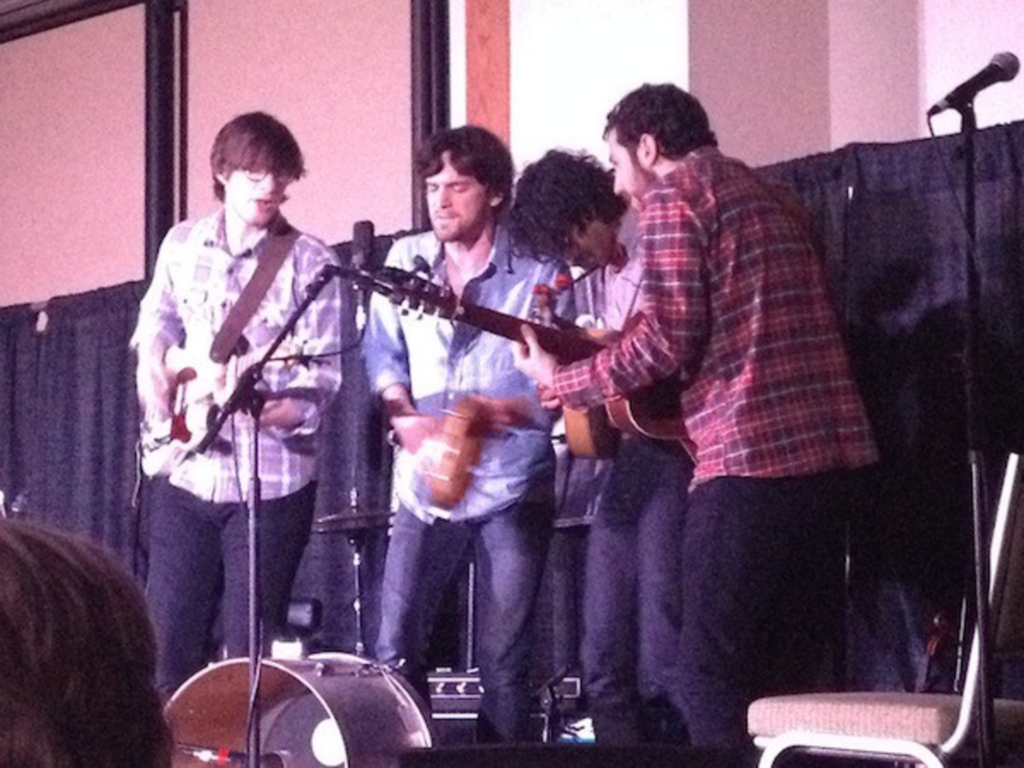 It was just before 6 p.m., and the first musical acts of the night were starting. I was assuming I’d face a horde of folkers, but was slightly disappointed that the early-evening special was so limited in attendees. The halls of the Westin Crown Center were bare; perhaps too much partying in the upstairs rooms took place the night before (and morning of, for that matter).

I began the evening slowly, with Canadian singer-songwriter Willie P. Bennett. The blue stage light was harsh upon walking in, but it did eerily set the scene. The rotating players shared personal stories of friendship, laughter and pranks, and the crowd of around twenty laughed along and sang the words they knew. Lyrics like “Raindrops fall like gypsy tears, as if to wash away all these years” made even the most hardened Bennett fan sink reminiscently in his seat. The overall Bennett experience was beautiful amidst the general quietness around the building. About the fifth song and fourth musician-rotation in, I chanced my luck at finding something else with a little less sad blue lighting. 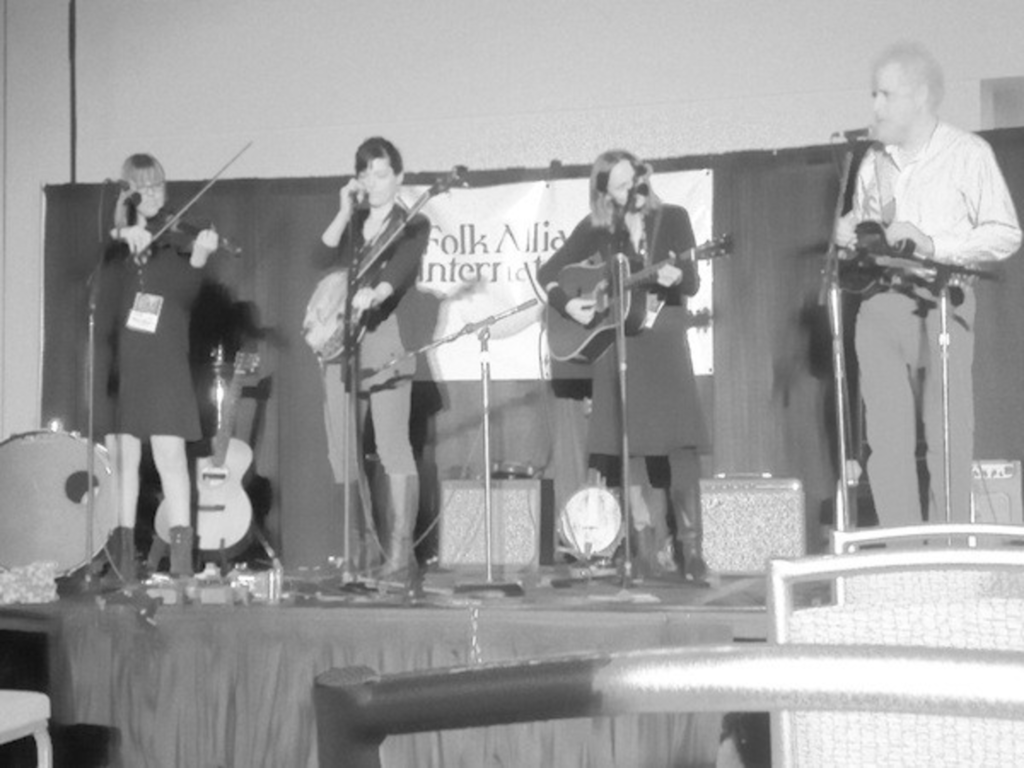 I found Carolyn Hester, Josh White Jr. and Harry Tuft. White confidently rolled through a blues number with foot stomping and his guitar as rhythmic guides. Seeing him in such an intimate setting seemed so charmed; remnants of his legendary father’s influences remained strong.

White introduced Carolyn Hester, and her soft -spoken voice and stark chords took me back to a place I’ve never actually been: the 1960s. Hester played two songs about patriotism, and even managed to get the crowd to sing along. Amy and Karla Blume, Hester’s redheaded daughters, proudly played bass and the keys alongside their mother. At times, Hester’s voice made me think of Chrissy Amphlett of the Divinyls, which was undirected but felt oh-so-right.

Harry Tuft was perhaps the most adorable guitarist at the whole conference, which is a huge achievement for Taft, considering the company we were keeping. He sang the sweetest ballad with the simplest of chords, and it melted my heart – and everyone else’s, for that matter. Upon the ballad’s completion, a faint “aww” sounded from the listeners.

At this point, my mindset was less focused on making the shows I knew I wanted to see, like The Black Lillies, and more about taking in the experience of hearing new acts. The timing was off on the stages by at least ten minutes, so I ditched my schedule and headed on for whatever caught my attention.

An introduction for the Roys, a sibling band, flooded the hallway, and that was my queue to take a seat inside their conference room. Three humble players in matching black suits accompanied the siblings, and the banjoist was the most surprising. He didn’t look like he had sprouted any chest hair, but played nonchalantly – almost overpowering the mandolin playing of the male lead singer. I would be a little nervous to see how he was playing in ten years. 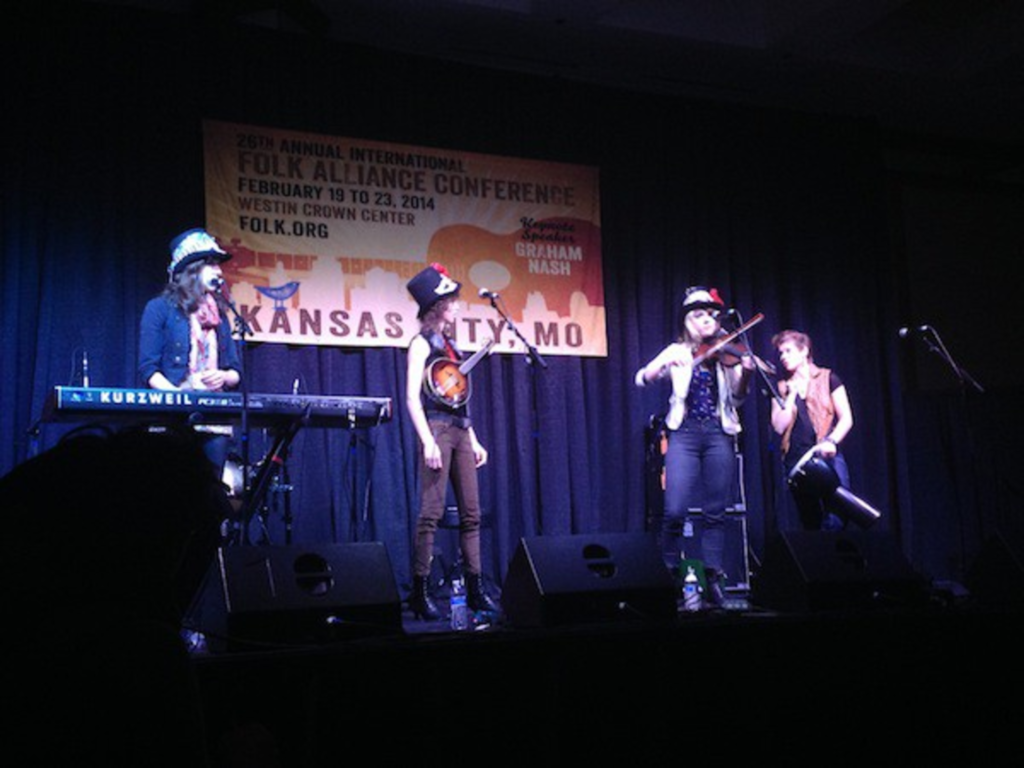 Continuing on with the sibling and young artistry theme was an absolutely must-see band from Fort Collins, Co. A sister quartet filled with skilled instrumentation and ethereal vocals, the ladies of Shel would give practically every band present a run for their strumming skills.

Their music was sturdily placed within traditional folk, yet adventurous. For their age, Shel has a matured lyrical word choice in original chord progressions. (They reminded me of Nickel Creek.) Each sister played a core instrument beautifully. Childhood Saturday mornings were definitely not spent in front of a TV.

Their final song was an instrumental featuring the fiddle and mandolin and was written by the mandolin player, who looked every bit the winsome fairy or a land mermaid she performed like.

[page]The finality of Shel’s set provoked the need for a drink. I saw two friends at the bar, and they filled me in on a group called Darlingside. I had only heard a few of their tunes, but felt the need to see them after hearing about their journey to music. The indie folk group’s story started in an acapella group at Williams College, and Darlingside currently stands as the members’ main affair. Plus, the fiddle player is from Kansas City, so what’s not to love?

I stopped in for their set just in time to catch their last song, “Open Door.” It was graceful gorgeous, written with only guitar accompaniment. The members even joked how the song wasn’t fully written yet, and told the audience to “imagine how good it could be.”

I stopped in to see a few other bands, including Hot Buttered Rum. Its banjo playing vocalist sounded uncannily like the singer from the Fruit Bats. New York-based Gangstagrass followed their set. Honestly, their harmonies and instrumentation were spot-on, but the combined-genre of bluegrass and hip-hop just wasn’t for me.

I left quietly and strolled in to see Grammy-nominated Sarah Jarosz, who was well worth the wait. Her velvety voice transformed the stark conference room into an informal and personal setting, even though hundreds were crammed in there to see her. 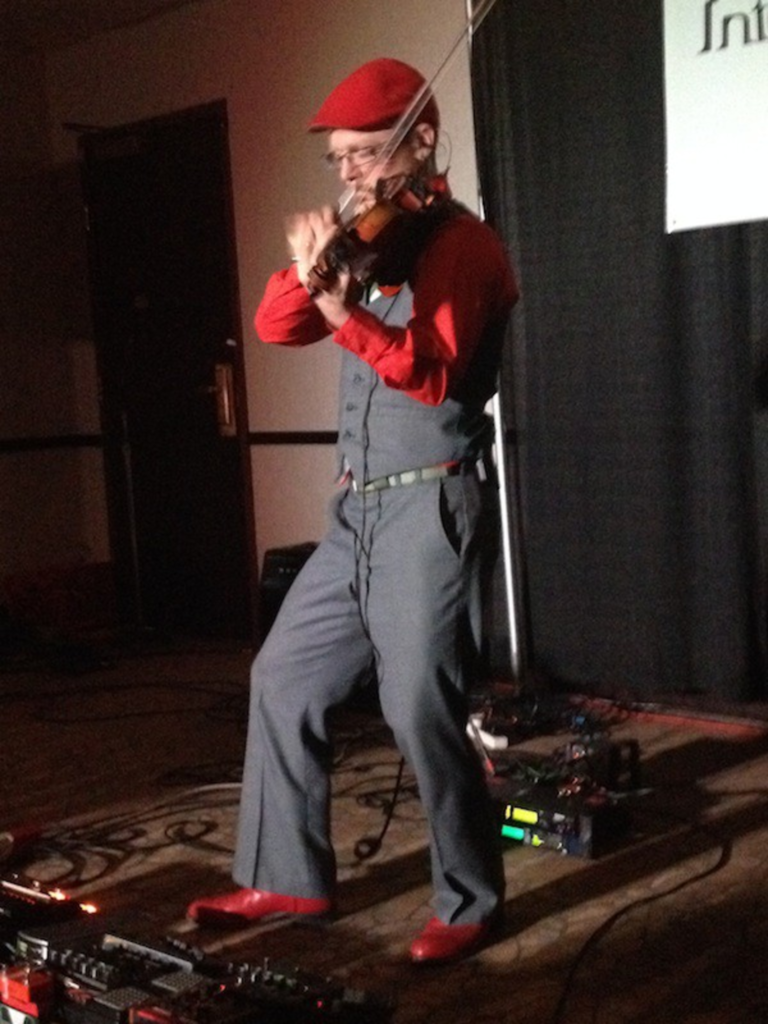 I checked the time and remembered that my new favorite fiddler, Casey Driessen was coming up. I had seen him the night before on the seventh floor as part of the private showcases, but I was ready to have a little more room to catch my breath at his ingenuity. He is a one-man, peddle-using band, and I was glad for the opportunity to see him twice.

After witnessing the Casey Driessen Singularity yet again, I decided my night could not at all be topped, at least in the scheduled-musical sense. As much as I wanted to stay for the all-night soirées that were going on upstairs in the private showcases, I knew it was time to bid farewell to my musical pleasures. Plus, I knew a glass, or five, of red wine was calling my sentimental heart home, where the ringing of banjos and mandolins would not quit my ears.

Leftovers: I have a favorite “overheard” quote of the night. On the way up the strangely positioned stairs, two musicians, one sporting a mandolin and the other, a square case of unknowns, talked fruits: “I’ve got some apples and avocados if you want some.”

“Man, I would love some avocados… . You’re right up my alley.”