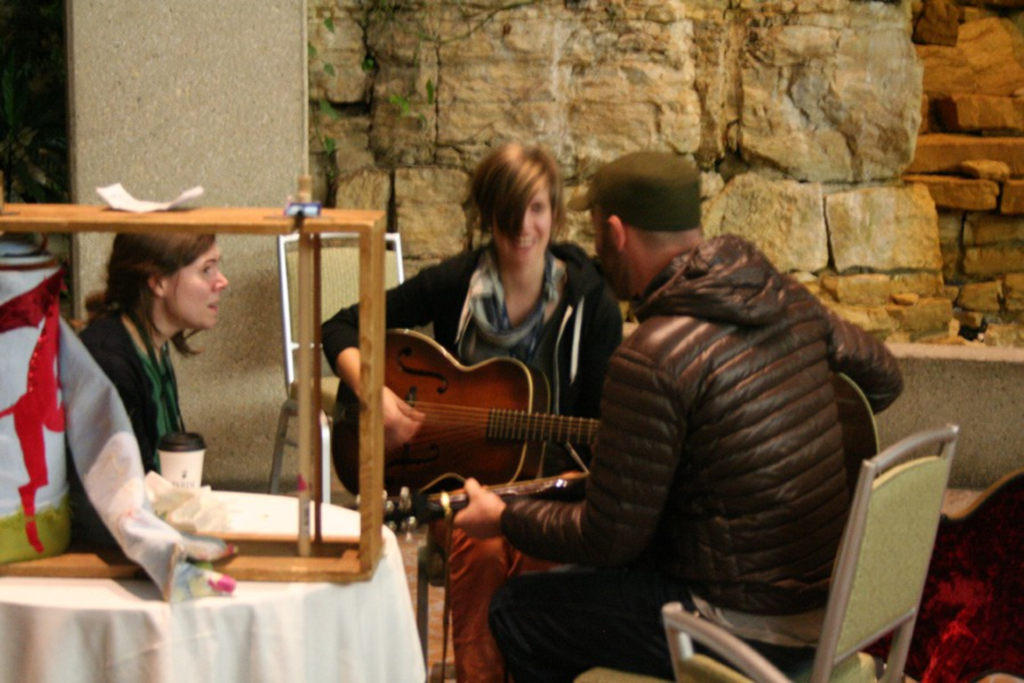 Walking into the Westin lobby for the Folk Alliance International Conference is almost overwhelming. You’re basically slapped in the face with a wall of noise. Music and voices hit you the instant you walk in, and it never ceases. In addition to the numerous showcase rooms, bands play in stairwells, hallways, next to fountains – if there’s open space, there is a musician there, and they are singing or playing.

Any conference is a series of choices: Do you pick the solo singer-songwriter who’s right there or do you wander down the hallway to see what awaits around the next corner? For the first act, I poked my head into the main ballroom to see Owen Temple, from Austin. He has a great, raspy voice – like Steve Earle. Temple started out solo and gradually added in friends on electric guitar and stand-up bass. His guitar playing is a little loose, nearly sloppy, but he’s pretty engaging.

But it was the next act I saw that really made me stop as I walked by the room where they were playing. I heard fiddles, clapping and stomping. I first noticed, upon sticking my head through the door, that Welsh act Canan had a harp player. That’s pretty folky in and of itself, but stepping in, I could see their accordion player clogging on a mic’d piece of plywood while the band whipped up a hoolie behind her. The entire audience was hooting and hollering, and judging by the number of astonished faces and utterings of “wow, right?!”, I deeply regret having missed the rest of their set. 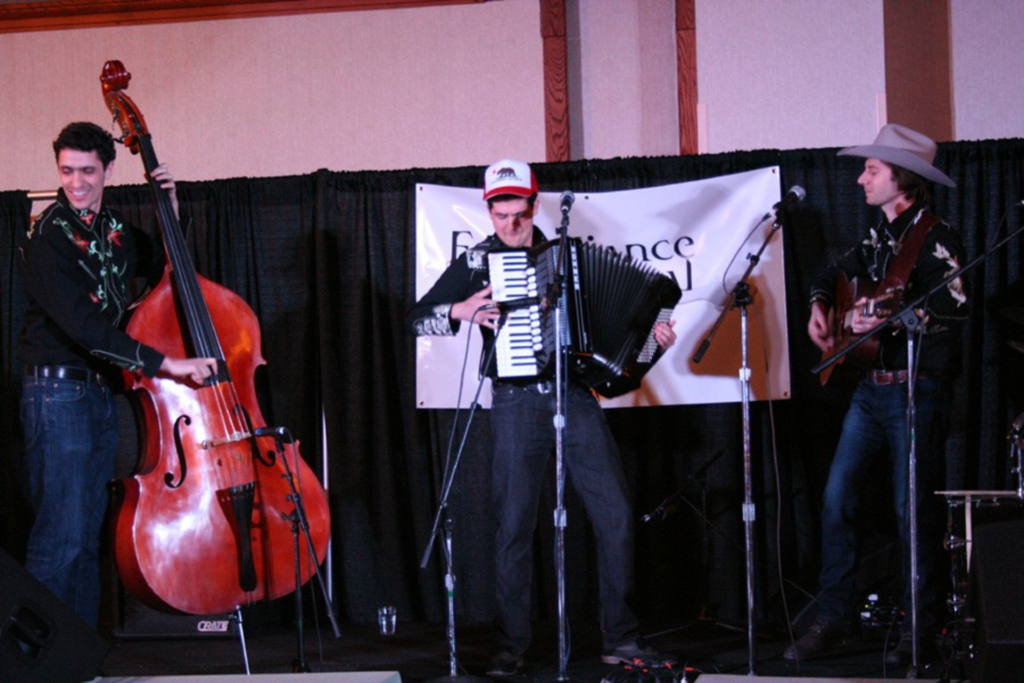 The first band I had any plans to see was New York’s Amigos, who describe themselves as “American music from all over the country.” While I’d gone purely on name, seeing them as they got ready to play, in matching shirts, and with someone holding an accordion, I knew I’d made the right snap judgment. If nothing else, you have to see them do Bill Monroe’s “‘Blue Moon’ two ways.” They play the bluegrass standard with an interstitial of what sounded like Boots Randolph’s “Yackety Sax” on accordion. It’s amazing as all get-out: a tour through everything they do in one song, with country, Tejano, zydeco and bluegrass all melded together with infectious harmonies. 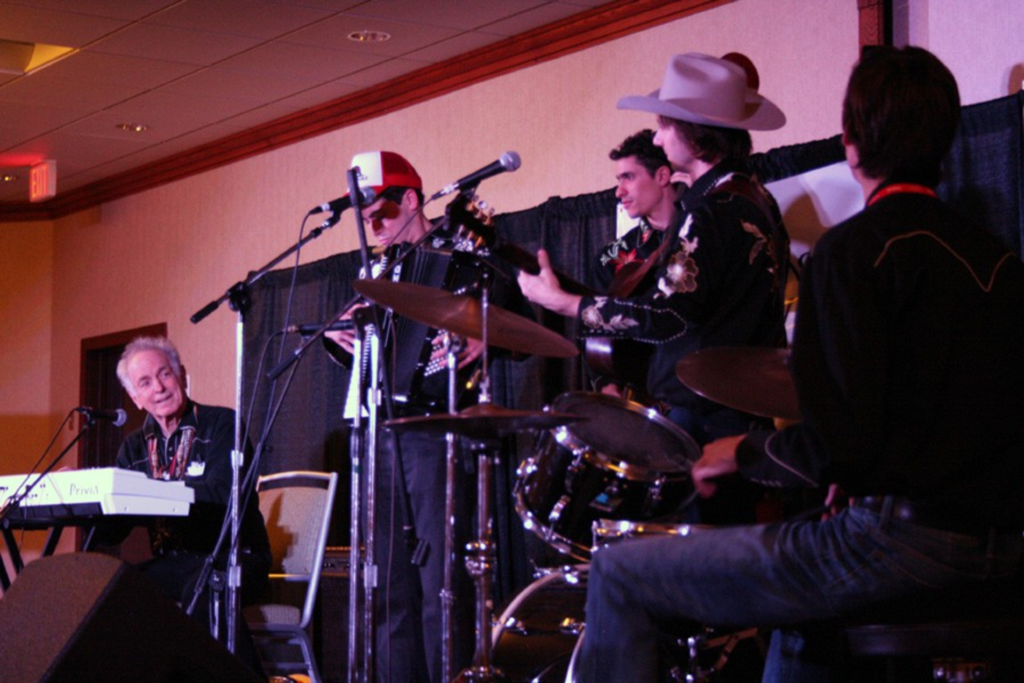 During the introduction for the Amigos, the emcee had mentioned that they’d been jamming with David Amram. His name sounded familiar, so I’d originally intended to consider his set but was absolutely convinced when a friend speaking with him prompted Amram to name off his soundtrack work – which was Splendor in the Grass and the Machurian Candidate. Amram was backed by the Amigos, who went from Jimmie Rodgers to jazz with about a five-minute break. They started with “Take the ‘A’ Train,” followed by an “ethnomusicologist’s nightmare,” a blues with Chinese flute. His introductions were witty and informative, and he managed to weave jazz and folk and all sorts of other things into this amazing tapestry. Seriously, this was a genius and musical legend of the highest order.

I took a moment to step outside, where all you could hear was the sound of cars, with the faintest hint of the musical endeavors inside every time someone stepped out to smoke. There were a couple of gentlemen talking about the Sochi Olympics, which evolved into a discussion of how one fellow had predicted the fall of the Soviet Union in a paper he’d written in 1981, for which he received an F. He called the professor who’d given him that grade the night the Berlin Wall fell “to ask him how he felt about the grade now. That fucker hung up on me.” I very nearly missed Chuck Mead’s set, this guy was so entertaining. 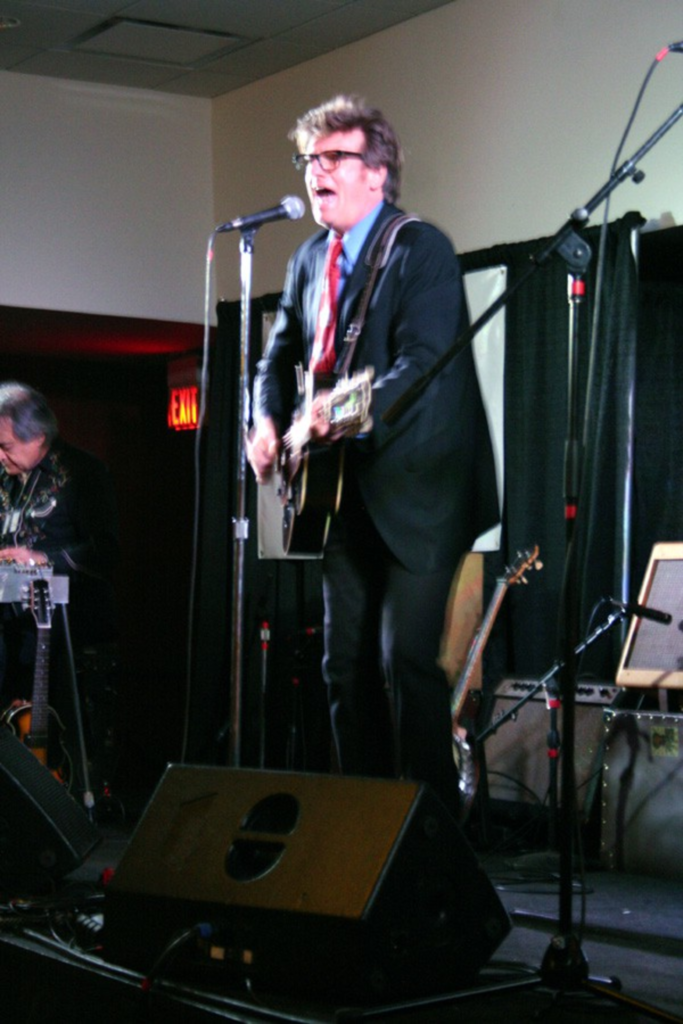 Thankfully, however, I only missed the first song of Mr. Mead and the Grassy Knoll Boys. Mead and company played mostly cuts from his new album, Free State Serenade, to a crowd of rapt and ravenous fans. Maybe it’s the crowds I’m used to or the style of music being presented, but Mead’s set of rollicking honky-tonk was the first time I really got a feeling for there being any sort of party atmosphere during the showcases. While hoots and whistles were a given during every set, Mead’s music inspired a more enthusiastic response. 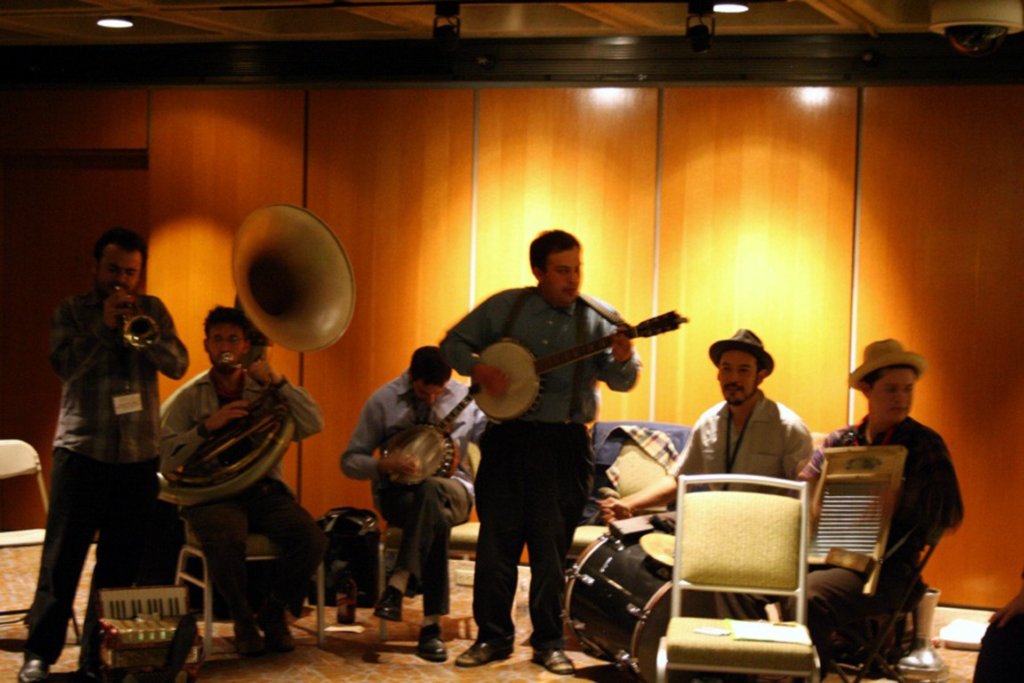 Randomly wandering, I heard a ragtime band playing New Orleans jazz in a small space on a balcony. A tiny crowd of folks were dancing and clapping along to this bunch of street musicians, and it was refreshing to hear a band play completely unamplified, using the acoustics of the hotel lobby to sound like they were coming out of Marshall stacks. 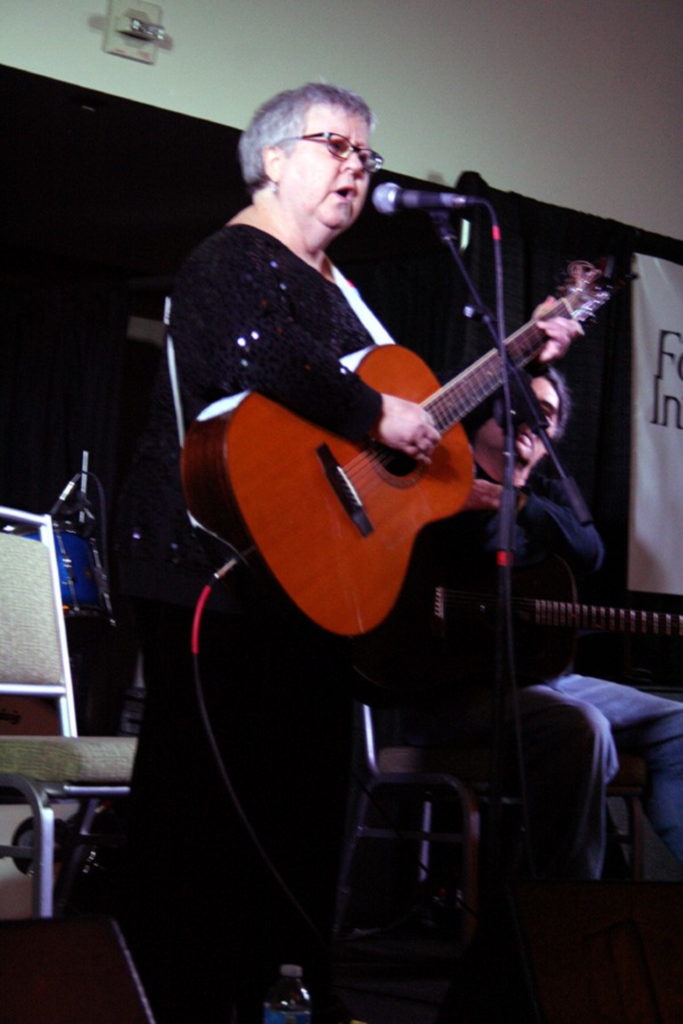 Christine Lavin and Don White were hilarity personified, as I’d assumed. These two were absolutely fantastic at getting the entire audience involved and made it seem like so much more than just two people onstage with acoustic guitars. There were group howls and even a choir of “Sensitive New Age Guys.” It’s interesting: People laughing was what i expected, but I hadn’t counted on so much of the audience being people waiting for Brewer and Shipley. However, each and every one appeared to have been made instant converts. I heard so many “oh, they’re so FUNNY” comments. 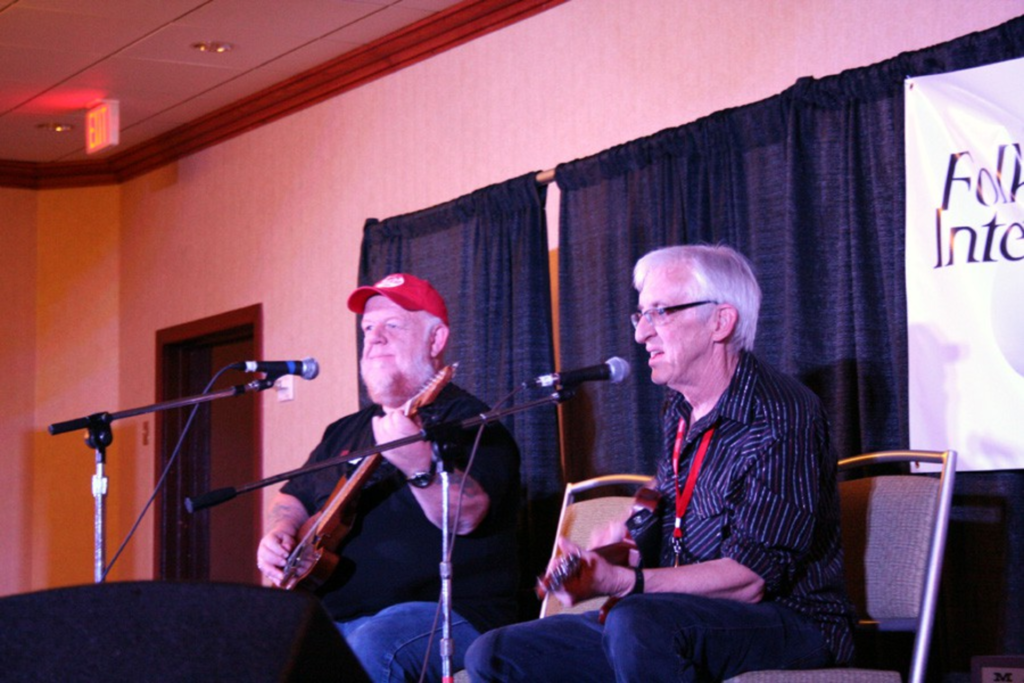 Making the choice for the final set of the night was difficult, but upon seeing that not only was Redd Volkaert playing but he was also paired with Commander Cody’s Bill Kirchen, I made the decision to join the guitarmy. It was the right choice, too. What you had onstage were two men who could just intro a Bob Wills song, rattle off the key, and then they’d both play it effortlessly. Blues, country, jazz – they could play anything, and it seemed like there was no small amount of appreciation between the two for each other’s talent. It was like watching a master class in how to engage an audience. These two guys were old, sitting down, and in a small hotel ballroom, and I was more entertained than 90 percent of the bands I’ve seen with a full light show and backup dancers.

That sort of sums up Folk Alliance in a nutshell: Being moved and entertained by the music and the people who make it, not by a light show or something else – just pure, unfiltered talent.