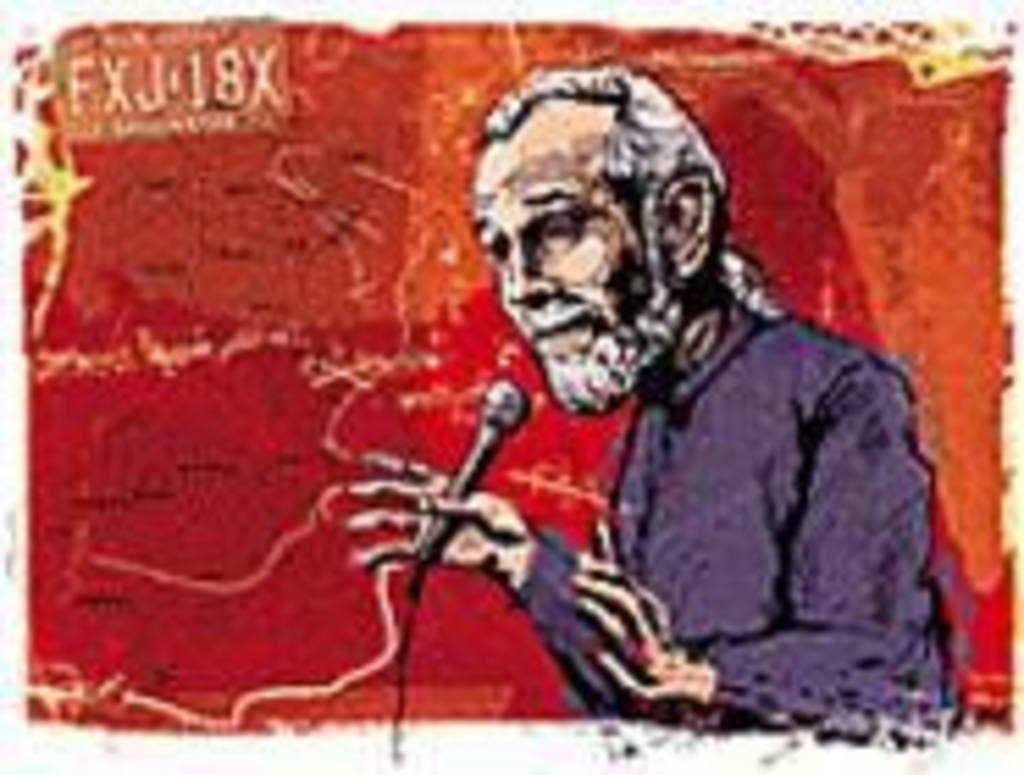 The Thursday-afternoon Let Iraq Live vigils have moved. Beginning today, anti-war protesters should go to the intersection of Blue Parkway and Cleveland (just north of Swope Park) — not to Westport. Between noon and 12:45 p.m., protesters hold signs while passersby honk their horns in agreement. Occasionally, the pro-war people jump out of large vehicles to make their feelings known as well, but most people just honk. It will be interesting to see whether the responses differ in the new spot. For information, call 913-321-2206.

As Valentine’s Day draws near, why not beat the crowd and go out at midnight tonight instead of waiting until tomorrow? It’s kind of romantic to be so filled with passion that you can’t wait one freaking day, and you might even luck out and get a little elbow room somewhere. We’ve said it before, and we’ll say it again: La Bodega‘s “flaming coffee” drinks are the best aphrodisiacs around. The flaming coffee is made of alcohol (consumed in moderation, it induces a mild slackening of inhibitions and a pleasant blurring of vision) and coffee (causes the heart to race, the body to remain awake all night and generally enhances urges of all kinds). Servers actually light the beverage on fire, which should satisfy any couple’s exhibitionist tendencies. And it’s topped with whipped cream. Go get ’em, tigers. La Bodega is located at 703 Southwest Boulevard. For information, call 816-472-8272.

As always, couples who are eager to tie the knot can get in on the action during the annual Valentine’s Day Marriage Marathon at Unity Temple on the Plaza (707 West 47th Street). This year, one of the couples slated to do it marathon-style has been engaged for sixteen years. For information, call 816-561-4466.

A less romantic option for Valentine’s Day haters (read: killjoys) might be the new play opening at Grant Hall Theatre (5228 Charlotte). Hot L Baltimore is set in the lobby of a run-down hotel on the eve of its demolition. Demolition. Nothing lovey-dovey about demolition. The characters, like the building, are burned out. Curtain time is 8 p.m., and tickets cost $5. For information, call 816-235-6222.

If Valentine’s Day wasn’t all you’d hoped it would be, it’s time to replace reality with fantasy. Today is the second and final day of the Romance Readers’ Book Sale. Lustful readers can head over to the Antioch branch of the Johnson County Library (8700 Shawnee Mission Parkway) between 9 a.m. and 3 p.m. All sales may be final, but noncommittal types can rest easy in the knowledge that there is room on any shelf for more than one novel. For information, call 913-261-2330.

Weather is so barbaric. What kind of civilization can’t find a remedy for sleet? As a result of seasonal unpleasantness, many of us are now holing up inside until the skin on our faces stops hurting upon contact with the outdoor air. If one outing could cure a person of cabin fever, though, it would be the Sierra Club’s weekend backpacking trip in the Hercules Glades Wilderness in southwest Missouri. That wilderness, so designated by Congress in 1976, contains open grassland, forested knobs, steep rocky hillsides, limestone outcroppings, a maze of narrow drainages, and hollows cut by water. Hiking along the 42 miles of maintained foot trails is ranked as moderately difficult, and backcountry camping is unrestricted. It sounds like a beautiful escape from clanging radiators, blaring televisions and empty boxes of hot-cocoa mix. But it can’t cure us of weather. For information, call 816-461-6091.

The passage of Prohibition in 1920 was, according to music critic Gary Giddins, “the best thing that could have happened for jazz.” Once bars and saloons became illegal, speakeasies began popping up right and left. There were more than 5,000 of them in New York City alone, providing havens for entertainers ranging from jazz musicians to poets to vaudeville performers. It is this speakeasy atmosphere that a handful of local performers are hoping to recreate with a show that’s halfway between a poetry jam and a play at Uptown Theater (3700 Broadway) at 8 p.m. Tickets to The Love, Peace and Soul of Poetry cost $12.50. People who show up at 6:30 can have dinner beforehand; the dinner and play package costs $22.50. For information, call 816-820-8087.

How many times have we heard that enthusiastic “Live from New York, it’s Saturday night!” and actually felt excited about it being Saturday night in New York, even though we’re sitting on our couches in Kansas City? It tugs at our heart to think about the fact that comedian George Carlin was the first-ever host of Saturday Night Live, and to realize that — decades later — the dude’s still funny. He’s still funny, and he’ll be performing live in Lawrence tonight. (“Monday night” doesn’t have the same ring as Saturday Night Live‘s famous opening line, but we’ll take what we can get.) Carlin brings his stand-up shtick to the Lied Center (1600 Stewart Drive) as part of a national tour called What Am I Doing in New Jersey? It includes classic Carlin routines such as “Reagan’s Gang, Church People and American Values,” “People I Can Do Without” and “Keeping People Alert.” The show starts at 7:30. For information, call 785-864-2787.

At 7:30 p.m. in the Westport Coffee House Theater (4010 Pennsylvania), People for Animal Rights is sponsoring a free screening of The Witness, a documentary about a Brooklyn construction worker who becomes an animal-rights activist. The movie tells a touching story about one man’s transformation and also documents the cruelty of animal-unfriendly industries. For information, call 816-756-3222.

Musicians’ side projects usually suck. One exception — 20 Miles — might not offer anything revolutionary, but it does give the Jon Spencer Blues Explosion’s Judah Bauer an opportunity to explore new avenues for his lo-fi guitar heroics. Leaving behind fretboard gymnastics and dissertations on the art of the distortion pedal, Bauer’s stripped-bare tone, sure-handed strumming and nicotine-stained vocals underscore his thoughtful side. To check it out, go to the Hurricane (4048 Broadway) tonight. For information, call 816-753-0884.