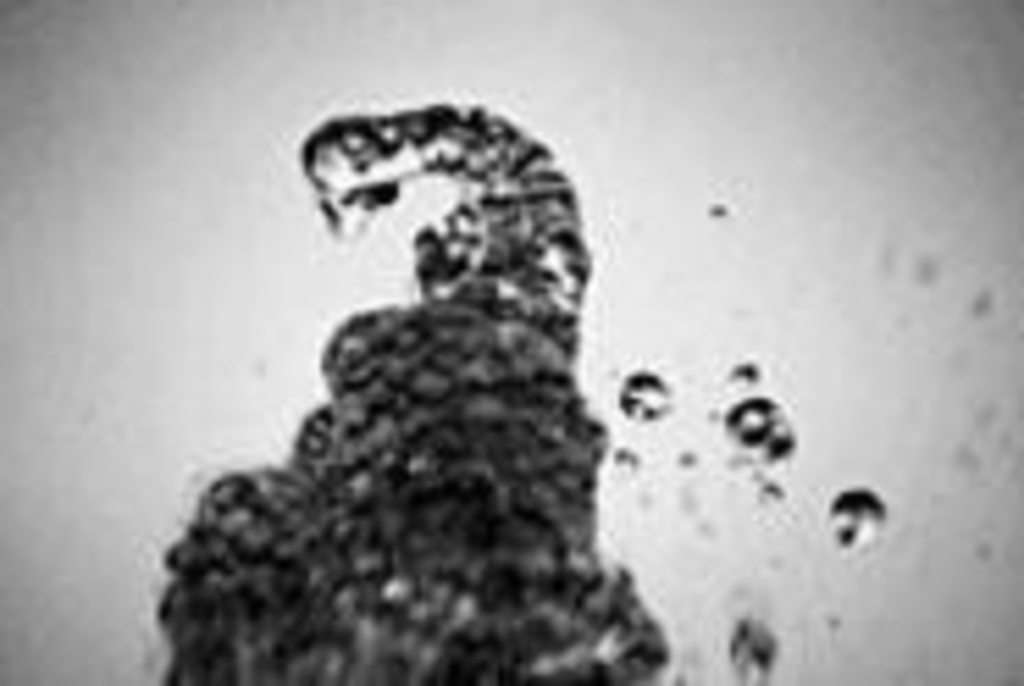 Thursday, February 3
Tonight kicks off the Kansas City Art Institute’s spring “Current Perspectives: Transformative Identities” series with Linda Weintraub at 7 p.m. at Epperson Auditorium (Vanderslice Hall, 4415 Warwick). Weintraub served as the first director of the Edith C. Blum Art Institute at Bard College, leaving behind a legacy of 50 exhibitions and more than 20 catalogs. She contributes to the international art journal Tema Celeste and is writing two more books to add to her already impressive oeuvre: Avant-Guardians: Ecology and Art at the Cultural Frontier and Creating Creativity. In other words, she knows what she’s talking about, so check her out. Call 816-561-5563 for information.

A city inundated with fountains can be quite striking in the summer months, glistening with sunlight and water. But in the dead of winter, it’s just drab, depressing concrete — and it’s everywhere. So we want to thank Barry Anderson for his three-channel video installation Fountain, which magnifies a single 6-inch jet to nearly 10 feet, revealing an organic beauty that’s generally forgotten this time of year. (Melted snow just doesn’t cut it.) A spurt of water on such a grand scale is scads sexier than a leisurely drive on J.C. Nichols Parkway, but it also works as a subtle reminder of what we have to look forward to in the coming months. Not that Anderson’s point is for viewers to pine for the Plaza, of course. But see for yourself what he’s attempting to express at the Belger Arts Center (2100 Walnut, 816-474-3250) as part of the group exhibition New4, works by new faculty members of UMKC’s art and art history departments. New4 opens today along with Dreamer-Ecstasy, paintings by Jim Sajovic.

National media and Academy of Motion Picture Arts and Sciences, take note: Just because we didn’t go see all the Oscar-nominated movies of 2004 and refused to eat our peas on January 1 (see Monday) doesn’t mean we deserve to see Leonardo DiCaprio’s smug mug on the cover of every glossy that comes out this month. In fact, we’re so jaded with the fuss over those faceless gold statues that we’re boycotting “good” movies altogether and pledging our allegiance to the Chucky Lou AV Club, which knows a truly entertaining movie when it sees one. Tonight at 11 at Screenland Theater (1656 Washington), gather with the connoisseurs of schlock and stand in awe of the sheer idiocy of Juan Piquer Simon’s 1979 bomb Supersonic Man, the title character of which has the ability to bring the beat down hardcore on cardboard robots and shed his mustache at a moment’s notice. Admission is $6.50; call 913-522-8870.

We might hate February 14, but we love Paper Source. We could spend hours in there, delicately fingering the various weights and textures of the gorgeous batik-print papers, letterpress stationery and luxe blush envelopes. (OK, so we already do that. Can’t help it. Compulsion.) We think we might enjoy the holiday a little more this year if we sign up for one of the store’s fantastic workshops, where Diana Lynn Ball gives tips on handmade valentines and teaches basic rubber-stamping, embossing and collage techniques. Best of all, we have unbridled access to the Paper Source supply closet to use as “inspiration.” The class, from 1 to 3:30 p.m. today, is $45; call 816-753-2777 to register. This is going to be the best Valentine’s Day ever!

Monday, February 7
We understood the possible consequences of sabotaging our chances for a lucky 2005, but damn it, we just didn’t feel like eating black-eyed peas on New Year’s Day. However, we have another shot at keeping the tides of misfortune at bay for another few hundred days with the approach of the Chinese New Year, which officially begins February 9. To do the job right, we’ll need to perform rather occult tasks: not wash our hair, hang a few scrolls, burn incense, abstain from using knives, and (gasp) clean the entire house. But we think turning the arrangements over to the fine folks at Bo Ling’s should sufficiently mollify the fates. Today through February 28, a party of six superstitious souls can get an eight-course Chinese New Year feast for $28 apiece. This should count for especially good luck now that Chinese Restaurant News has named Bo Ling’s among the top 100 Chinese restaurants in America. Area locations are 4800 Main (816-753-1718), 9055 Metcalf (913-341-1718) in Overland Park, 9576 Quivira (913-888-6618) in Lenexa and 7105 West 135th Street (913-239-8188) in Overland Park.

If the thought of the 18th Street Fat Tuesday festivities (see “One Swine Day,” right) makes you uneasy (or just cold), then consider the Captain Morgan Mardi Gras Club Crawl, sponsored by the Kansas City Blues Society. From 7 to 11 p.m., revelers can catch buses to and from, well, pretty much all over the goddamned city — including B.B.’s Lawnside Bar-B-Que, Mike’s Tavern, the Grand Emporium, Balanca’s and Danny’s Big Easy, among others. The music of some of the area’s top blues bands and two national performers will float out of 15 KC clubs, with the charters running regularly on designated routes. Tickets are $10 in advance through Ticketmaster (816-931-3330) or $15 if you wait until tonight; call the Blues Society at 913-649-0383 or see www.kcblues society.com for more information.

At the risk of sounding presumptuous, we must regard the first Wednesday meeting of the Gay Men’s Social Group with a measure of suspicion. The purpose of this meeting, titled “The Single Life,” according to promotional materials, is to “talk about the joys, pains and challenges facing gay men in Kansas City, the United States and the world.” But we can’t help but assume that most of the men who show up at 7 p.m. at the Lesbian and Gay Community Center (207 Westport Road) — however earnest their intentions may be — will be eyeing the crowd for prospects even as they come together to commiserate over the trials of, alas, being a single gay dude. The press release also announces that if this meeting goes well, future gatherings will tackle such topics as “The Dating Scene,” “Making Relationships Work” and “Breaking Up Is Hard to Do.” Wow, sounds like now you can meet him, date him and dump him, all in the context of a support group. You go, boys. Call the center at 816-931-4420 for more information.