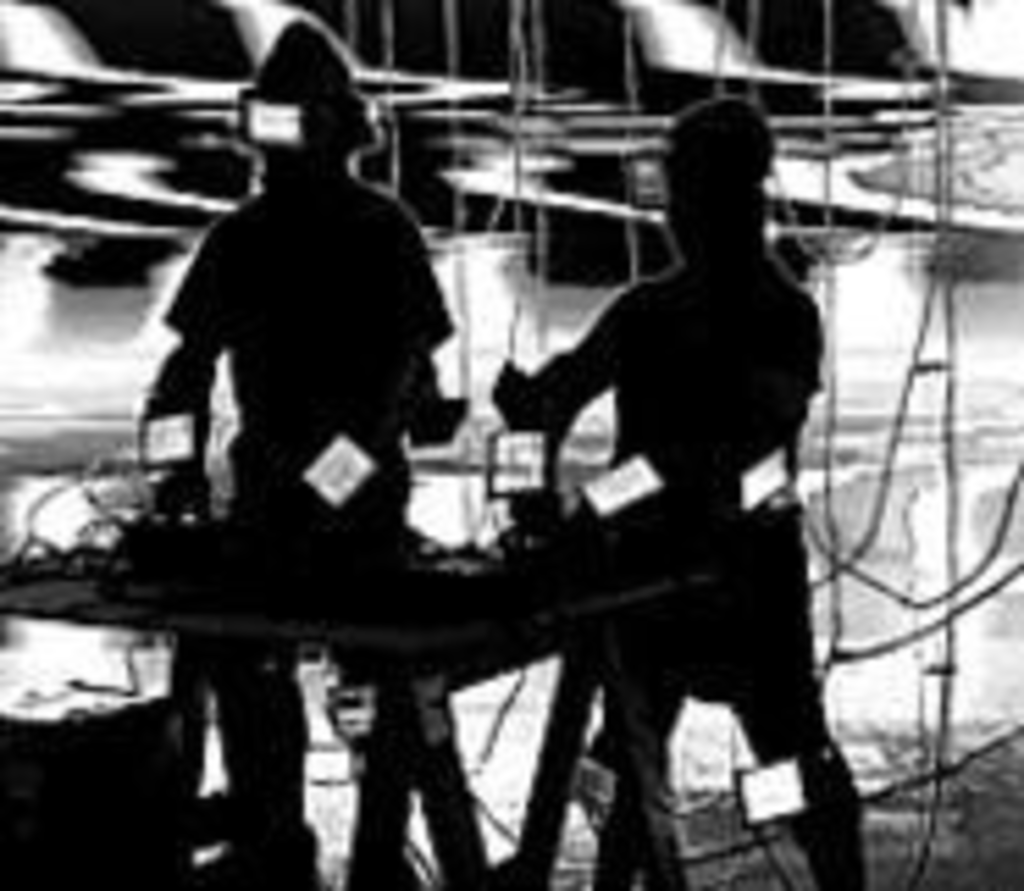 Thursday, February 17
Some parents are vaguely disappointed (or terrified) to discover that their college-bound child wants to study music. So just imagine the reaction of Kyle Lapidus’ mom and dad when they realized they were paying for their science-minded son’s education in electronica — at Harvard. We don’t know for sure how they responded to young Kyle’s penchant for producing experimental beats, but we doubt they’re too disappointed today. He struck gold in 2001 when he hooked up — and we mean hooked up — with Tali Hinkis, a graduate of Ecole des Beaux Arts in Paris, for a successful collaborative project called LoVid. The pair has toured the United States and Europe ever since. LoVid, which scrambles television output into hyperkinetic audiovisual abstraction using homemade electronic devices, is in town for part of the Urban Culture Project’s Conditions of Sound (see Urban Experience). Lapidus and Hinkis lecture at 7 p.m. at the Kansas City Art Institute’s Irving Amphitheater (4402 Oak). Call 816-802-3458.

For people who grow up thousands of miles from California’s surfing culture, ski-bumism usually represents the height of underachievement (and merely getting out of Kansas could be considered a defining accomplishment). Membership in a ski club that takes occasional road trips, however, is mere hobbyism. That’s why urban ski-club members must encourage the spirit of full-time alpine vagrancy whenever possible. This notion makes the Kansas City Ski Club’s Hookers and Hellraisers party absolutely necessary. From 8 p.m. to midnight at the Marriott Country Club Plaza (4445 Main), powder fiends dress as those other icons of the American slacker pantheon — bikers and the women who love them. Cost is $10; call 913-383-3743.

Our favorite part of Ebay is swooping in at the end of an auction and outbidding those suckers who thought that fucking fantastic pink 1950s typewriter was all but theirs. Ha! The only drawback is that we don’t get to see their fallen faces, which would make our victory that much sweeter. But not so at 8 tonight, when our bid for Maggy Rozycki Hiltner’s subversive hand-stitch work at the Kansas City Artists Coalition’s benefit art auction trumps the fool who thought his silent tender would be sufficient. The selection, which includes work by almost 200 artists, has been on view since February 4, when bidding began, but the real fun is tonight. Doors open at 6, and the silent auction runs until 7:45, but the kick-ass live wars begin at 8 at the KCAC space, 201 Wyandotte. Tickets are $20; call 816-421-5222.

The combination of nudity and anarchism seems to be a recurring theme in these parts. Last year, some Lawrence radicals put together a naked calendar and raised $1,500 for the Solidarity Radical Library. Now it’s anarcho-syndical Kansas City’s turn to get naked, and the proprietors of the struggling Crossroads InfoShop (1830 Locust) have enlisted a burlesque instructor to help them tease the capitalist hegemony into slack-jawed submission. Emily Lauren, best known for her “quantum cute” Sugar Puppy and the Lovely Dumplings show, teaches the burlesque class, which is not necessarily for (or by) anarchists but is open to the public. Barring interference by the FBI’s decency division, today from 7 to 9 p.m., as many as 15 women — all of whom should be dressed in removable layers — convene amid the manifestos in the bookstore for a beginning lesson in the fine art of striptease. Because this is an educational environment, spectators are not welcome, so we’re not sure exactly how this will help the cash-strapped InfoShop, but, hey, they seem to be on the right track. This Communiversity class costs $15. Call 816-283-3510 to register.

We almost peed our pants laughing when we read that the Vermont Teddy Bear company recently came under fire from mental-health advocacy groups for its “Crazy for You” bear, which came with a straitjacket and a “commitment report.” Fucking political correctness, man. We’re wondering whether anyone who shares our sense of humor might show up to stir the pot at the insanely creepy Bear Affair throughout Independence today. Exhibits, sales, puppet shows, photo ops and themed breakfasts (during which diners are entertained by life-sized character bears) have been going on since Saturday, but today is the final opportunity to engage in such activities — including $3 appraisals of your teddies by a professional bear authority. Contact Independence Tourism at 800-748-7323 or check out www.visitindependence.com for dates, times and prices.

For devoted public-radio listeners, pledge drives are a fact of life, right up there with death and taxes. So we issue a tremendous Thank You to 90.1 KKFI. Instead of bulldozing regular programming with boring, desperate-for-money banter, the station has enlisted more than 40 local bands for a band auction to raise funds. Beginning today from 6 a.m. to 9 p.m. and continuing throughout the week, each band plays a 30-minute slot, during which listeners call in and place bids on whichever act they’d like to play for two hours at any event — wedding, birthday, Democracy Now! party, etc. Call 816-931-3122 for information; see www.kkfi.org for a complete schedule.

When people need help in Kansas City, their most frequent request is for food, according to a report by the Mid-America Assistance Coalition. As Kansas City’s only food bank, Harvesters has collected and distributed more than 200 million pounds of food since 1979. After years of operating in cramped and leased quarters, the organization has finally moved to a new location at 3801 Topping Avenue. From 8 to 9:15 a.m. and 11:45 a.m. to 1 p.m. today, Harvesters gives behind-the-scenes tours of its new facility, showing just how goddamned hard — and rewarding — it is to collect and distribute 24 million pounds of food a year on a shoestring budget. Call 816-929-3017 to reserve a spot.