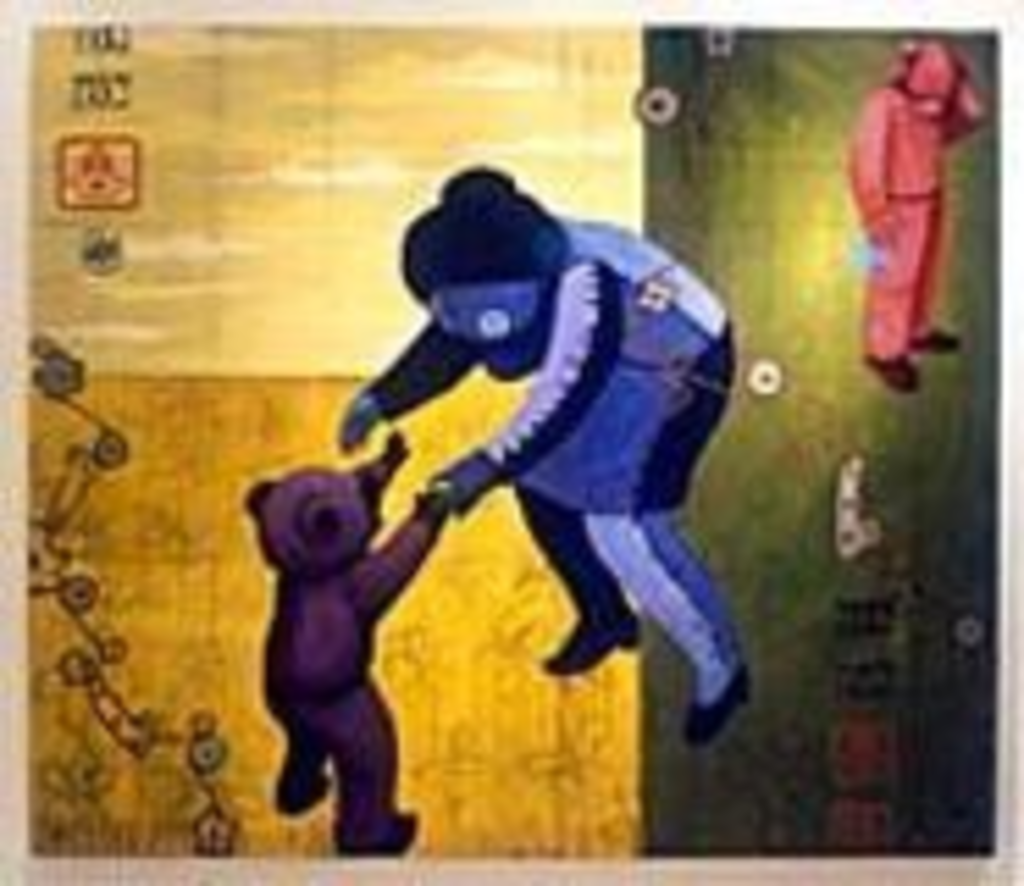 18 Thursday
Kojo Griffin‘s paintings look like fun: round, cartoonish animal characters painted on backgrounds of soft, earthy hues. Viewers are likely to think back to the Snuggle fabric softener bear with the cute giggle when they get their first glimpse of Griffin’s exhibit at the Kemper Museum of Contemporary Art, 4420 Warwick. But closer examination of these cuddly creatures and the dynamics between them reveals something less cheerful: distance, frustration and tension. Griffin does not paint scenes of outright strife; rather, he works subtly, painting characters in opposite corners of a canvas, for example, with their backs turned to each other, or a mother and child embracing while a father figure painted much smaller in the background looks down at his feet. Like Art Spiegelman, the Nobel Peace Prize-winning comic book artist who wrote about the Holocaust using mice, cats and pigs as characters, Griffin uses the seeming innocence of childhood images and the sweet associations with them to make the troubling psychological content of his work more difficult, simply because it is less expected. Meanwhile, the Hebrew letters and mechanical-looking sketches in the background are pleasingly cryptic. For producing an exhibit that has all the trappings of childhood, Griffin doesn’t seem too dreamy when it comes to looking back; this exhibit is soberly nostalgic. So sober, in fact, that visitors might feel driven to seek intoxication upon leaving. For more information, call 816-753-5784.

19 Friday
For any TV babies of the 1980s out there wondering what happened to bad-ass shows like The A-Team, the chance has arrived to ask the show’s writer and producer, Stephen J. Cannell. Only he might not appreciate those questions much; he’s here to talk about his new mystery novel, The Tin Collectors, and not the demise of his claim to pop culture fame. But if The A-Team is any indication of what’s in store, both Cannell’s new book and the book discussion he’s leading at Unity Temple on the Plaza, 707 W. 47th Street, at 7:30 tonight should be action-packed. And if not, as Mr. T would say, we pity the fool. For more information, call Rainy Day Books at 913-384-3126.

20 Saturday
The Pub, 1727 McGee, shows disdain for president-elect George W. Bush tonight, scheduling its anti-inauguration gig at the same time the presidential inauguration airs nationwide. With the Pornhuskers headlining the event, it will be a night of porn husking instead of corn feeding in Middle America. If political matters inspire either frustration or boredom, the Pornhuskers’ famed use of expletives can provide relief on both fronts. Other bands scheduled to play are Eric and Lurlene, and the evening of good, not-so-old-fashioned conscientious objection will be emceed by the Trailer Court Queen and bartender/chef Ernie Locke. It’s an unusual chance to stand on moral high ground while yelling things that would get any fifth-grader kicked out of class in a heartbeat. The $8 cover is payable at the door. For more information, call 816-421-1634.

21 Sunday
The Carlsen Center at Johnson County Community College, 12345 College Boulevard in Overland Park, poses a question that others have asked in many different contexts: What makes it great? The center’s What Makes It Great? series brings performers to town in hopes that they’ll have the answer. One such performer, going onstage today at 2 p.m., is Portuguese violinist Elmar Oliveira, who’ll perform Beethoven’s Kreutzer Sonata. Beethoven wrote the piece for Rudolphe Kreutzer, one of the foremost conductors of his day who also happened to be a composer and a violinist. Kreutzer didn’t think much of it, and he apparently never even played it. For more information, call 913-469-4445.

22 Monday
So they’re introverted. So they look down at their feet and move only slightly while they’re playing. That’s the stuff that great indie rock is made of. For a band that’s been performing live for less than a year, Oscar Edison Jones has had a lot of gigs, and the group draws pretty big crowds. Just like that guy whose last name is Edison, the four-person band is innovative: Its members have been reworking a consistent set of songs about breaking up and getting back together since the band formed, and they’ve recently started experimenting with new sounds using fun toys, such as chaos pedals. They play tonight at the Grand Emporium, 3832 Main, with Stella Link and the Shut-Ins opening. For more information, call 816-531-1504.

23 Tuesday
John Coltrane’s music isn’t easy listening. If it were, we wouldn’t need a lecture called “Listening to Coltrane” presented by a university professor. Coltrane is a jazz legend, and people of all ages from a variety of backgrounds listen to his albums. Still, his life and music are full of complexities. Dr. Leonard Brown, a Northeastern University professor and producer of Boston’s annual John Coltrane concert, leads this discussion at 7 p.m. in the Blue Room of the American Jazz Museum, 18th and Vine. For more information, call 816-474-8463.

24 Wednesday
The George Bernard Shaw play Major Barbara, which tells the story of a devoted Salvation Army worker who sets out, somewhat misguidedly, to save souls, seems more relevant than usual now that the season of ringing Salvation Army bells is still fresh in shoppers’ memories. And another question — whether these attempts to gather a few coins from shoppers’ pockets for every lofty gift-buying check they write are misguided — takes on new meaning with the recent scare that decreasing tills in the red tin bins might mean impending economic doom in this country. Kansas Citians who don’t know what to make of all this talk might get some food for thought at the Just Off Broadway Theatre, 31st and Broadway, at 7 p.m. This dark comedy isn’t necessarily meant to inspire hope, but it ought to instill a healthy dose of cynicism, which is often the next best thing. For more information, call 816-765-5767.