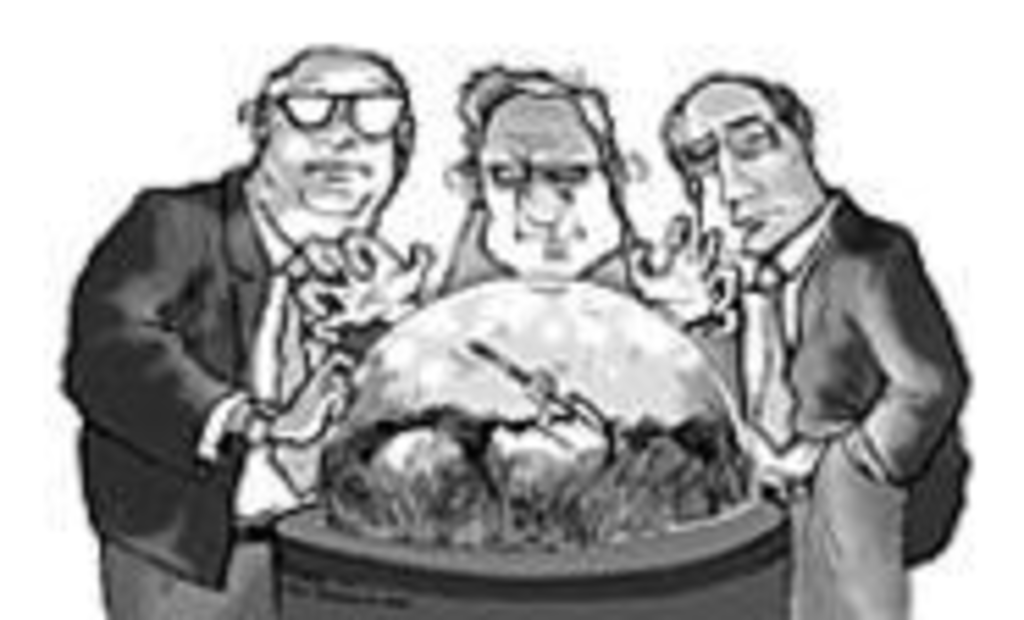 28 Thursday
In anticipation of the weekend, you can find a mellow place to have a good time at the Cup and Saucer, 412-B Delaware, which can function as a coffee shop, a bar or a gallery. The artwork on display, Maggie McDaniel’s Energy Burn, is a collection of mixed-media works that combine ink, gesso and burned wood. The huge geometric wood pieces on the walls look as though they came from another time and place (probably because of associations with the 1970s wood-paneling craze). It can get too noisy for drinkers to have their coffee talk inside, but this stretch of Delaware is one of the few city blocks with usable benches on the sidewalk — and the view of the city is romantically urban. For more information, call 816-474-PERK.

29 Friday
Fish, when it’s good, is a treat, especially in this landlocked terrain. Fish, when it’s been basking in its own fishiness overnight, takes on a rubbery quality and a strengthened smell that only the bravest fish lovers would risk. So it’s curious that any band would name itself Leftover Salmon. Nonetheless, the band is sponsoring this year’s Salmonfest, which means that visitors who attend the three-day festival of camping and music at Bearcat’s Getaway in Lesterville, Missouri, will get Leftover Salmon every night. But band members are leaving room on the menu for a few other acts in case people would prefer not to try out the group’s unique polyethnic Cajun flavor. Weekend passes range from $65 to $75. For more information, call 888-356-2844.

30 Saturday
It’s what we’ve all been afraid of: proof that computers can do it all, that humans no longer serve any purpose other than to program computers to do what needs doing. There’s even a cyber-robot named Alice who can be reached for small talk or a heart-to-heart at alicebot.com. She’s mastered the human capacity for defensiveness, asking questions such as “I’m sorry, was that not an appropriate emotional response?” And now that Brooklyn-based artist Roxy Paine has given birth to not one but three art-making machines, any and all neo-Luddite factions might as well call it quits. Paine’s third art-making machine, titled Painting Manufacturing Unit, uses a computer-driven nozzle to spray acrylic paint across the surface of a suspended canvas. The excess paint is reclaimed and, after a drying period, the process begins again, creating layered lines over the canvas. A 2 p.m. talk with the artist at Grand Arts, 1819 Grand, provides an opportunity to ask questions about this process and to discuss the artist’s other works — notably his now-famous sculptures of mushrooms sprouting from gallery floors. For more information, call 816-421-6887.

Tonight, Guided by Voices plays at The Bottleneck, 737 New Hampshire in Lawrence, in a concert that reprises the band’s recent show at The Hurricane, where fans ranging from teeny-boppers to retired hippies pushed through the crowded bar to get as close to the stage as possible. Unlike younger bands whose members act as if they’re too cool to care whether the crowds huddled up front are into the music, Guided by Voices shows as much enthusiasm for the fans as the fans show for them. And though it’s not fair to expect to see this next bit repeated, they did hand out extra beer from backstage to people within arm’s reach. Tonight’s concert starts at 9 p.m. For more information, call 785-842-5483.

1 Sunday
Kansas City seems to be teeming with daylilies. These gaping orange blossoms are even growing among weeds in back streets and alleys. If their preponderance has sparked curiosity and awe, the MoKan Hemerocallis Society can be of help at today’s Daylily Show at the Loose Park Garden Center, 52nd and Wornall Road, from 1 to 4 p.m. Everyone in attendance will receive a free daylily, presumably in better condition than the ones you can get by carrying a pair of scissors on a leisurely afternoon stroll. For more information, call 816-781-0241.

2 Monday
It’s hard to imagine what young artists would do with themselves if they didn’t bear the responsibility of being poor and struggling — even if the obvious answer is that they would create art. Jeff Becker is kicking around an idea for helping budding artists achieve this goal. His project, called the Arts Incubator, is still in the early stages of development, and it’s too early to say what kinds of resources he’ll be able to provide if this project comes through, but Becker holds a forum at the proposed site, 115 W. 18th Street, at 6 this evening. This forum provides artists who might be interested in sharing equipment, space and resources a chance to give Becker their input. For more information, call 816-916-8970.

3 Tuesday
What’s red, gold and green all over? Karma Chameleon, of course, as every child of the ’80s worth his or her weight in jelly bracelets knows. Singer Boy George is proving he can adapt as well as the Karma Chameleon that came and went. He narrates a film called The Wolves of Kromer, showing today at 4:45 p.m. at the Tivoli, 4050 Pennsylvania, as part of the Kansas City Gay and Lesbian Film Festival. The movie is part fairy tale, part romance and part allegory: On the fringes of a British village, young wolves are falling in love with one another while their fates are being sealed by an evil maid who’s plotting against them nearby. How this tale can be interpreted as a parable about prejudice can be understood only after a viewing. For more information, call 816-960-4636.

4 Wednesday
Give Me Convenience or Give Me Death is the name of a Dead Kennedys album; it’s also the name of a “free-market march” starting at 2 p.m. in Mill Creek Park, 47th and J.C. Nichols Parkway. Fliers posted by anonymous sources display triple hamburgers framed by television screens, images of SUVs and the American flag with a bar code where Betsy Ross would have stitched stars. Everyone is invited to share ideas about economic models that might be more profitable than the ones we’ve got. Given the reference to the anti-establishment Dead Kennedys, we’ll take a wild guess that the measure of societal well-being isn’t going to be the Dow.