Niecie’s gives comfort to a neighborhood 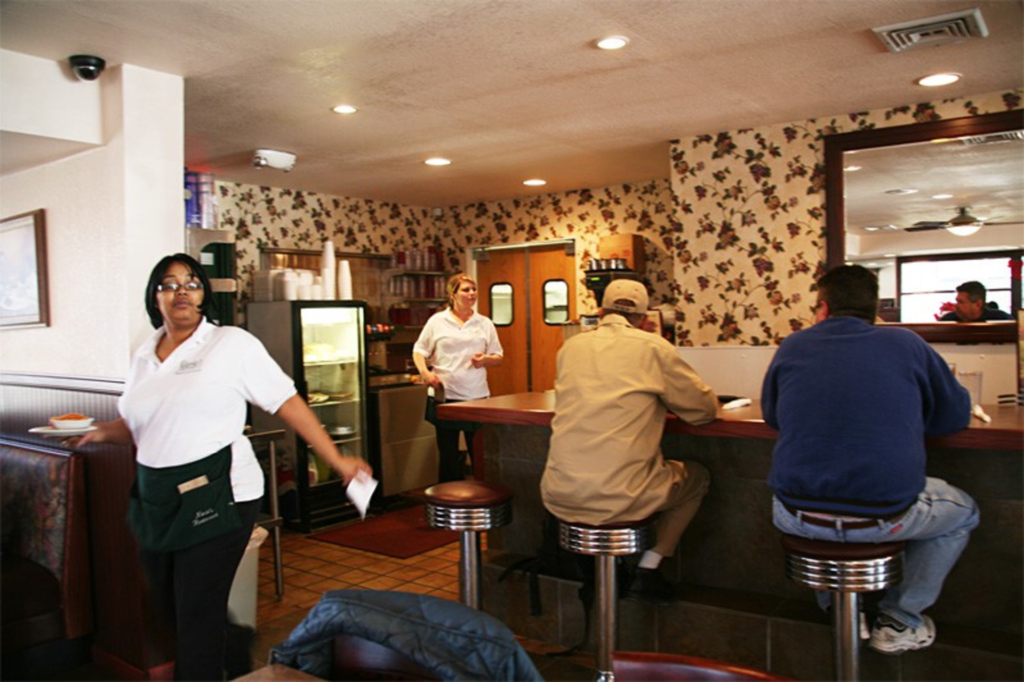 A friend of mine observed: “You’ve been writing about a lot of diners lately. Is there a connection between the economy and comfort food?”

Of course there is. Not just comfort food but inexpensive comfort food. The Great Depression was the heyday of the diner, the luncheonette, the cafeteria, and the blue plate special. In 1933, one of the Depression’s worst years, the Kansas City Directory listed more than 1,000 restaurants, lunchrooms and tearooms — and that didn’t include drugstore lunch counters and dozens of lunch counters at the city’s five-and-dime stores.

The modern equivalent of the five-and-dime is the convenience store, and most of those have greatly expanded their packaged food selections to include all kinds of hot sandwiches, salads, cheeses and fresh fruits. And, yes, diners seem to be making a comeback, too.

In the case of the cozy new Niecie’s Restaurant on Troost, it’s simply a case of the owner, Denise Hayes, moving her longtime home-cooking restaurant from a storefront at 59th Street and Prospect (where she served hefty breakfast platters and soul suppers, including braised oxtails and fried chicken, for more than a quarter of a century) to newer, bigger digs at 6441 Troost.

It was a good move for Hayes and a real boost for this neighborhood, which lost a popular family-style restaurant several years ago. Jimmy’s Family Restaurant at 5429 Troost was never going to win any awards for its cuisine, but it was a great place to get a filling breakfast or a hot lunch for a few bucks. And in a neighborhood filled with working-class families, college students and senior citizens, it was a real gathering place.

Hayes and her family opened the new Niecie’s a month ago in a vacant Pizza Hut building, transforming the front of the house into a sunny, attractive dining room with comfortable upholstered booths and a counter with stools. And patrons here reflect the neighborhood’s ethnic diversity.

“It’s a big-city diner,” my friend Carol Ann said, “the kind of restaurant you would find all over Chicago or New York City.”

It’s no fancy latte-and-scone joint, anyway. While Carol Ann rattled on between sips of grapefruit juice, I watched in fascination as a woman at the next table improvised an ersatz cappuccino by pouring spoonfuls of sugar into her mug of coffee, then the contents of three little French vanilla creamer containers and, finally, several hefty spoons of whipped cream.

I was happy with my mug of plain ol’ black coffee, robust enough that it snapped me out of my morning doldrums after the first two sips. It woke me up so well, in fact, that I felt empowered to order what might be the most fattening dish on Niecie’s breakfast menu: a waffle and three fried chicken wings. In this signature dish, the hot, crispy wings are a solid counterpoint to a soft, puffy waffle topped with a giant spoonful of melting butter. I doused everything with sticky maple syrup and savored every damn bite.

Carol, meanwhile, ordered the best deal of the day. For $3.25, the Sunrise Breakfast plate includes either two strips of bacon or one sausage patty, one egg, toast or a biscuit, and a cup of coffee. For a little extra, Carol could also get a side of buttery grits.

“You can’t get a breakfast like this over there,” Carol Ann said, looking out the window and motioning toward the McDonald’s across the street.

Niecie’s serves the morning meal all day, but you can only get the Sunrise Breakfast and the terrific sausage-loaded biscuits and gravy until 11 a.m.

The list of daily specials, handwritten on a whiteboard at the front entrance, changes a little each day. Pan-fried chicken and beef stew are almost always included there, but lately I’ve seen salmon croquettes, smothered chicken, oxtails and Salisbury steak on the list — all that and a reference to Matthew 5:16 (“Let your light so shine before men, that they may see your good works”).

“Our dinner business isn’t as busy as breakfast and lunch yet,” one young server told me, “but people are just finding out that we’re here.”

One bitterly cold night, I stopped in for an early dinner and was the only patron in the dining room, with the exception of Denise Hayes’ son, Mark, and a well-fed security guard. I realized that I hadn’t eaten Salisbury steak in decades. The Niecie’s version was tender, breaded and sautéed, then blanketed in a brown gravy as dark and shiny as chocolate sauce. Side dishes were fragrant stewed greens (sweet and slow-simmered with onion and hunks of bacon) and a creamy macaroni and cheese.

And for dessert, Niecie’s offers a full selection of Golden Boy pies as well as homemade cobbler, sweet-potato pie and several kinds of cake. They were out of chocolate that night, but the impressive slab of lemon cake was moist and covered in a thick, sugary and citrusy-tart frosting.

A couple of nights later, my friend Franklin and I popped in for another meal. Franklin wanted fried chicken. Although he’s a big fan of the nearby Popeyes, he wanted to see whether Niecie’s had a better deal. I think it does: The cooks at Niecie’s make a fine pan-fried chicken with a delicious crunchy coating; the dark-meat dinner is $4.99, while the white-meat plate is two bucks more, and both include a choice of two vegetables and a soft, yeasty dinner roll or two corn muffins.

I toyed with the idea of ordering the pig ear sandwich or a plate of smothered pork chops, but I decided to opt for comfort and had that night’s special: meaty, tender beef short ribs sided with mashers in brown gravy and fried green beans.

“You are having dessert tonight, right?” the server asked.

I’m sure I heard a piece of coconut-cream pie calling my name from somewhere back in the kitchen, but they would have had to roll me out of the joint, so I shook my head. Even with comfort food, it’s possible to get too comfortable.