Nicolas Cage remains an Army of One, James Spader always has his Secretary, and The Red Balloon stays forever in mind 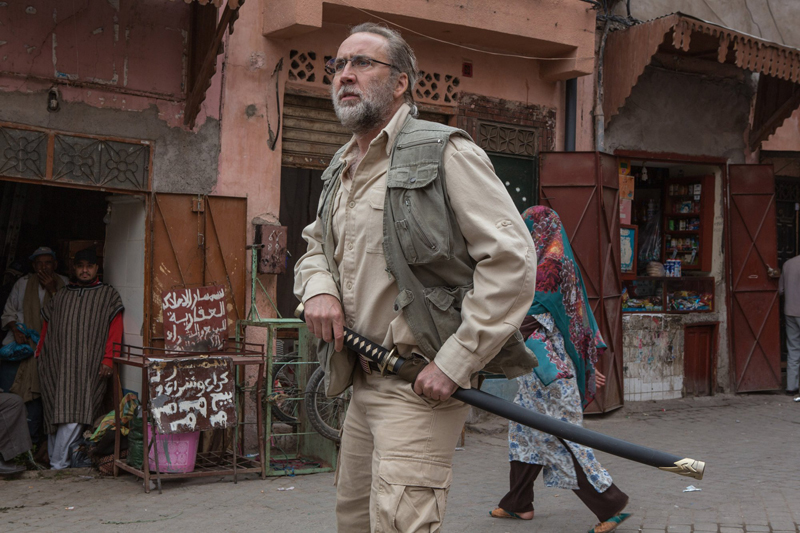 The late-period noir Private Property, virtually unseen since its 1960 release and recently restored in 4K, qualifies as a genuine discovery. Directed by Leslie Stevens (creator of The Outer Limits) and lensed by legendary cameraman Ted McCord (Treasure of the Sierra Madre, East of Eden), it’s the creepy, quietly devastating story of two drifters (a young Warren Oates and Corey Allen) who stalk an upper-class married woman at her beautiful Beverly Hills home. Heavily influenced by the French New Wave, Private Property is a bold film with expressive cinematography that was ahead of its time. It’s new on Blu-ray now, and is one of the best arguments for the continued relevancy of the format.

Zoe Kazan turns in one of the most heartfelt performances this year in — get this — a horror movie about a mother and daughter who are attacked by a terrifying creature after hitting an animal in the road with their car. I know it sounds schlocky (and small parts of it are), but Bryan Bertino’s The Monster is a surprisingly deep exploration of a troubled mother-daughter relationship, a simple premise carried out with genuine skill. Its limited theatrical release from A24 won’t make it to KC, but you can watch this solid horror drama today via DirectTV or VOD.

Flash! Aaaaah-ah! He’ll save every one of us! The majestic, synth-heavy Queen score to 1980’s sci-fi green-screen cheese-fest Flash Gordon is of course the No. 1 reason that seeing it in the theater is an awesome experience, especially at the Alamo Drafthouse, where everything is turned up to 11. The second is that it’s showing at 10:30 p.m., which ensures a fun, late-night crowd and gives you plenty of warm-up time at the bar beforehand. As in any camp classic, the actors in Flash Gordon (including multiple Oscar nominee Max Von Sydow) all play it stone straight, making lines such as “Flash, I love you but we only have 14 hours to save the Earth!” that much funnier.

Today at 1:30 p.m., The Kansas City Public Library starts a new intergenerational film series called Movies & Memories that welcomes people with dementia and their friends and families. The lovely 1954 short The Red Balloon kicks off the series, with a short intermission roughly halfway through and a brief discussion led by the Heart of America Chapter of the Alzheimer’s Association. It’s nearly impossible not to be moved by this joyful, melancholy, nearly wordless tribute to friendship, and the film has been curated with the best interests of those suffering from dementia in mind. What a wonderful idea.

The quirky 2002 BDSM romance Secretary proves that mid-period James Spader may be the best Spader. After all the preppy jerks of the ’80s and early ’90s and before his hammy TV career (Boston Legal, The Blacklist), there was this one-of-a-kind film, in which Spader plays a lawyer named Mr. Grey, who hires secretary Maggie Gyllenhaal. At first, his abuse is simply mental, but true love might be in the cards once he realizes how much she enjoys submitting to him. This indie sleeper is full of subversive humor but takes its subject very seriously, and Spader is at his nasty best. It’s on Amazon Prime.

Remember the guy on the last two seasons of Parks & Recreation who used to just haul off and yell at everybody for no apparent reason? His name is Billy Eichner, and he honed his high-strung brand of confrontational comedy on his one-camera “game show” Billy on the Street. Essentially, Eichner accosts strangers in NYC with pop-culture trivia and random insults, sometimes with celebrity guests in tow. Season 5 of the repetitive but very funny cult show debuts tonight on TruTV, and features Jon Hamm, Seth Rogen and Lupita Nyong’o.

Anyone who remembers the Nicolas Cage of the 1980s knows how downright insane he could be. His wildly inappropriate accents and mannerisms, in films such as Peggy Sue Got Married and Vampire’s Kiss, were as strange as his Elvis-inflected characters in Wild at Heart and Con Air. Good news: Crazy Cage is back. In Army of One, he’s an eccentric handyman with no military training on a mission from God (Russell Brand) to kill Osama Bin Laden. There is, however, also bad news: The movie, directed by comedy legend Larry Charles (Seinfeld, Borat), is terrible. But don’t let that stop you — it’s a disasterpiece you can’t take your eyes off. New on Blu-ray, it’s a straight-to-home-release joint, so it’s probably in that awful Redbox thing at Wal-Mart.