Nick Cave’s “Property,” at the Nelson, is a must-see 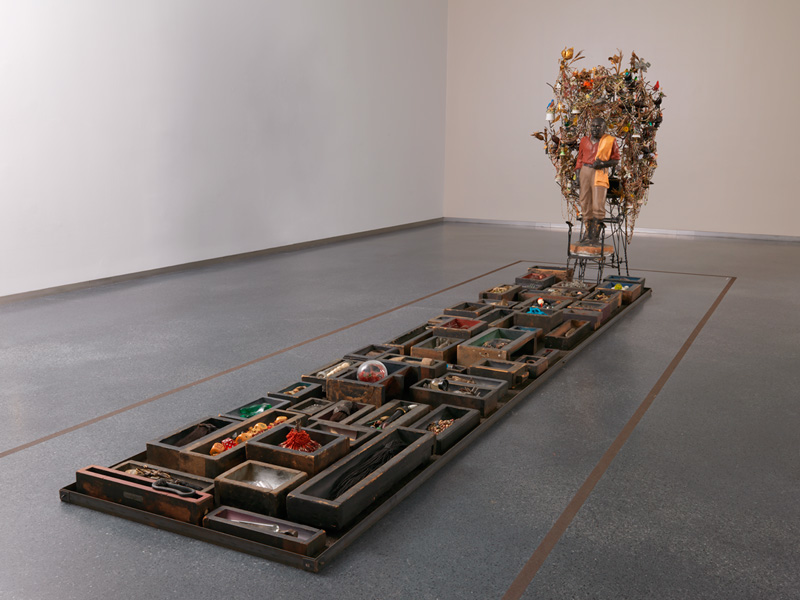 A historical core sample of oppression and overcoming materializes before you in “Property,” the sculpture of found and fabricated objects by Nick Cave (the American artist, not the Australian musician) recently installed at the Nelson-Atkins Museum of Art. The 1,000 objects he has laid into old sewing boxes tap into Cave’s personal story and commingle it with the history of African-Americans in a hard-to-separate mixed-media experience. It compresses the entire African-American timeline and insists that we consider it all at once.

A box of old fishing bobbers and a cubby of old keys feel like everyday bric-a-brac, but more suggestive objects, such as a glass revolver and a calf-weaning implement, poetically summon various injustices in black history. Personal items — casts of Cave’s hands, shaving brushes from his grandfather’s old barber shop — lend an intimacy to the struggle of the black working class. Evidence of live-in help for white families takes the form of a feather duster and a silver bell, the latter with an inflammatory blackface carved into the handle.

These are symbols of slavery’s unceasing aftereffects on modern black American lives, and Cave uses them to confront racial stereotypes. His inclusion of unfamiliar implements of labor alongside demeaning depictions this society long accepted pushes back against our insufficient knowledge of Africans before slavery hauled them to the United States. Look at the fistful of braided hair lolling in one of the compartments and you see both power and the removal of power.

Looking over these objects is a standing figure, about a third the size of a grown person. It wears an outfit from some other time, an older time, and it perches on a partial shoeshine platform, a stained rag slung over its shoulder. A chaotic web behind the figure weaves perfume bottles shaped like birds into a tangle of beads, a tree of life that has been denied order. The figure looks down the length of the installation, all 19 feet of it, pondering the history of the collection. The eyebrows turn up in a worried expression, for the past, for the future, for the staying power of what is crafted and discarded, for the inevitable decay of these things. What is owned? And what happens when ownership is finally shed?

Nick Cave’s “Property” is at the Nelson-Atkins Museum of Art (4525 Oak) through December 31.