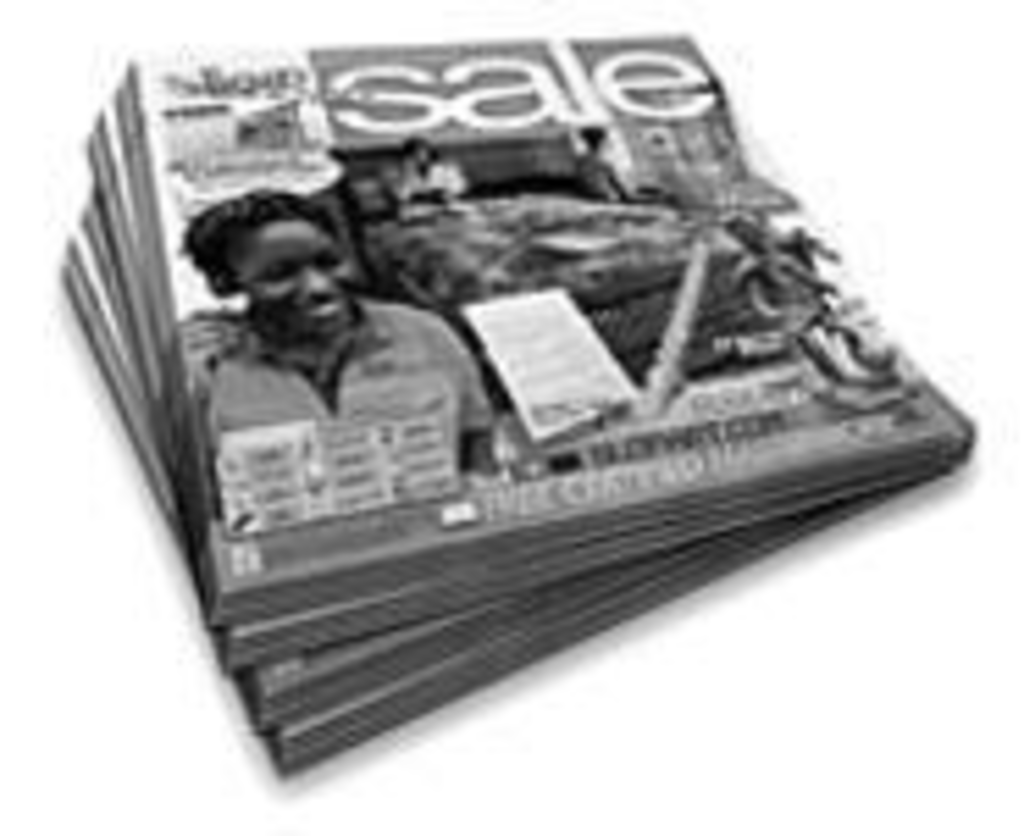 On Friday, January 10, some Kansas City Star subscribers undoubtedly searched the slick circulars stuck between sections of their newspapers, looking for good deals on DVD players, bedroom sets or twelve-packs of Pepsi. Some unsuspecting readers in midtown, Brookside and Mission Hills also found bargains on sterling silver sporks (only $79.99!), custom-carved crayons and scratch-off haikus (coins sold separately). The cover of the 24-page SlopArt insert showed “Brandi,” an Acquisition Specialist with a sales phone tucked against her ear. The dialogue bubble above her head announced, “I’ll be standing by to take your order when you finally realize this stuff is really for sale!”

That same night in St. Louis, former Kansas City Art Institute instructors Adriane Herman and Brian Reeves were busily working the room at an art opening they had put together. Herman was wearing a sign around her neck informing attendees that, though they had seen performance art before, they’d never had the chance to pay for it. For a bargain price of 99 cents a peek, gallery visitors could see two artists peeling carrots until the little shredded pieces had piled up to their knees. Meanwhile, Reeves was focused on selling the triple-shrink-wrapped art displayed on supermarket-like racks.

That’s when the reporter from a local TV news station showed up.

He told Herman and Reeves that he’d been reading the Riverfront Times (the Pitch‘s sister paper in St. Louis) in a restaurant when their circular fell out. He read it and reread it. Products such as Turf Neck (a small plot of grass that can be worn like a pendant on a necklace, fertilizer-free) just didn’t seem plausible. He figured it was a joke. Maybe the “Fascinating Fact” announced on the Business-as-Usual: Patrioticism page seemed too outlandish to be true. “Though currently faded from fashion,” the circular states, “dissenting opinion was once considered intrinsic to our nation’s health.” That couldn’t be right. These artists couldn’t really be selling monoprints of George Washington’s face as well as polyolefin-and-nylon patriotic jumpsuits … could they?

They could! When the reporter checked out the SlopArt Web site, he discovered that it was no joke. “He gave us a somewhat combative attitude,” Reeves recalls. “He was skeptical that it was real. He asked, ‘Is it tongue-in-cheek?’ and I gave him the answer that in order for something to be tongue-in-cheek, it has to be fake.”

Later that night, the commercial break before Herman and Reeves appeared on the news began with the following teaser: “Up next: Art … for sale!” It was as though the idea of selling art were new.

Of course, it isn’t. Even when art sits elegantly on stark, white gallery walls, a price list usually isn’t too far away. But generally there’s no price tag, no bar code, no sales pitch and no shrink-wrap. And gallery operators have a tendency to round up prices, asking for, say, $5,000 instead of trying to make buyers think they’re getting a deal at $4,999.99.

By housing art not just in galleries and studios but also in shameless print advertisements, Reeves and Herman are trying to elevate high art to the level of consumer culture. After all, people devote a lot more time and energy to televisions and new cars than to pondering the profundity of chiaroscuro. “People will spend $150 an hour to go to a lawyer,” Herman says. “But if you say, ‘I want $150 for a painting that took me an hour to make,’ they look at you like you’re crazy.”

Although Reeves and Herman have been creating and distributing SlopArt circulars in conjunction with group shows since 1997, this is the first time the duo has paid to have the glossy solicitation inserted in newspapers. Last Thursday, every copy of the Riverfront Times contained a copy of the circular; a SlopArt catalogue turned up in every paper delivered to Star subscribers in the 64111, 64113 and 66208 zip codes on Friday.

It was a major step for Herman and Reeves. “We’re alluding to something, and to actually make it real that way has been very exciting for us,” Herman says. But their success at recontextualizing art isn’t the only reason for their excitement. Sure, the art world takes itself a bit seriously sometimes, but the main point is not to topple its ivory tower. It’s to help the people inside the tower, who are slaving away to create art but don’t have any way to get it out into the world.

Herman recalls that when she taught at the Art Institute, students regularly expressed a desire to reach a broad audience with their work. Sick of hearing this, she finally suggested that if, for example, students wanted to reach more viewers with their videos, they should pay for local TV commercial time in the middle of the night, when it would be cheap. But the students who tried to follow her suggestion ran into unexpected trouble: Apparently, networks didn’t take kindly to people buying spots when they weren’t selling anything.

“You’re outside their formula,” Herman says, “and you actually don’t have access.”

But the newspaper circulars got the attention of television newscasters in a way that beautifully printed invitations to gallery shows could not. If artists can’t get on TV by buying time in the hours before sunrise, they can get prime-time exposure free by being as glaringly profit-oriented as everyone else in postindustrial society. That’s news.

Reeves and Herman have built a strong network of artists who are interested in showing their work in catalogues: People who have answered calls for entry in art magazines, people who have stumbled upon their Web site, people they’ve met in towns where they’ve lived, and people they’ve found by contacting art professors across the country.

“We often focus on printmaking departments, because what we do is conducive to things that can be made in multiples,” Herman says. “It’s funny. A lot of what we sell is one of a kind, but there’s still a lot that doesn’t sell.” She has high hopes that newspaper readers will provide an additional market for SlopArt. “We’re trying to ‘blitz’ a little more. We’ve already started making sales since these hit,” she says.

Each catalogue is essentially a juried exhibition; not everyone who submits work is guaranteed a place on the printed page. Only about 20 percent of the artists who want the SlopArt brand name on their work enjoy the privilege. The qualities that hold all SlopArt together are cleverness and function as a commodity. Arguably, there’s a use for every item advertised — something to justify the transaction. The buyer always has some sense of what he or she might get out of, say, a photograph of a baby (“Pacify your procreativity without the messy cleanup”) or an already-begun sketchbook (“Mitigate intimidation as you strive to commence with contrivance”). Utility and commodification are the exhibition’s themes, but that doesn’t make it any less artistic than an exhibition on, say, romance, food or childhood (all of which have been explored by recent shows here in town). None of these things is less commonplace than the others. Everyone was a kid once, and everyone has a reason for buying stuff.

We want the Marshmallow Bath Mat — so we can wipe our feet, then lick our toes.