New exhibitions at Haw and KCAC look back in different ways

It’s all about the past at Haw Contemporary (1600 Liberty, in the West Bottoms), which opens three new exhibitions with a 6-9 p.m.reception Friday, August 12. Each in its own way touches on the ideas of time and nostalgia, things expiring and reviving.

What Remains is a “contemplative” exhibition of new works by Chris Daharsh and Molly Kaderka. Daharsh presents sculptural works of layered materials such as burlap, concrete and plaster. These become contemporary artifacts. Kaderka draws highly detailed and likewise layered representations of things left behind: shells, bones, natural remnants. The invitation from both artists is to see time through craft process and to admire what, outside the context of art and art spaces, would likely be overlooked.

Yoonmi Nam, an associate professor in the University of Kansas’ department of visual arts, presents Temporary Arrangements, an ongoing series of prints and drawings. She writes: “I have used images of man-­made environments and objects, and cut flower arrangements as metaphors to evoke a sense of time that is both fleeting and eternal.” Cut flowers, of course, have an even more limited lifespan than when they remain rooted, but their arrangements can feel timeless. Nam places the flowers she draws into impermanent, human-made containers: disposable, single-serve food vessels.

Justin Beachler’s work returns to this address, following a 2013 exhibition in the large gallery, back when it was still the Dolphin. Upstairs in Haw’s Gallery 4, Beachler presents Old & in the Way, paintings and sculptural works that have been placed as visual gestures around the space. As usual, Beachler’s work is to be considered first through the “space” of an internet filter, as, he writes, a “multifaceted re-appropriation of cultural aesthetic.” Abstract painting and societal subcultures — for instance, the 1990s surge in appropriation of 1960s psychedelic music, clothing and drugs — combine to show off how we live in a time of a cynical, information-saturated time. 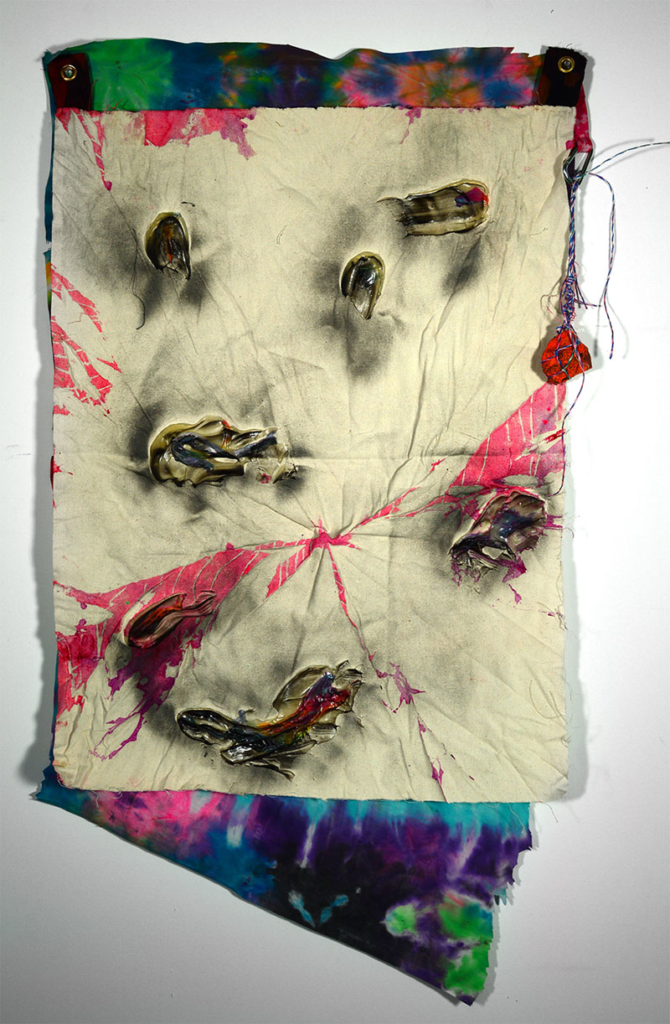 In fact, Beachler’s press announcement came in the form of a Maxell cassette tape, adorned with Deadhead bears and containing — for those who had the dusty technology to play it — what he describes as an audio “garbage dump of ’90s washed-out hippie subculture.” Think drug commercials and mashed-up Grateful Dead and Phish songs and bluegrass-weed culture. If you don’t have at least one giggle, you’re doing it wrong.

Stemming from the 1960s in its own right, the Kansas City Artists Coalition began as a local response to that era’s radical upheavals in politics, civil rights and the way artists approached their work and careers. Guess what? It’s been 40 years! Back then, the East and West coasts had the Artists Liberation Front, the Art Workers Coalition and the Guerrilla Art Action Group. In 1975, Kansas City artists gathered in the studio of Philomene Bennett and Lou Marak to discuss “How the Artist Can Benefit From Centralization,” and the KCAC was on its way to being born. Remember when the National Endowment for the Arts was a new and shiny dream? When artist-run spaces were the wave of the now? What about the “first alternative gallery,” KCAC’s space at 616 Central, circa 1983? Chances are a number of Pitch readers were born just about then. Having just closed a gorgeous and expansive retrospective by one of the coalition’s founding members, Collette Bangert, KCAC has been gearing up for a major anniversary celebration, opening its annual River Market Regional Exhibition Invitational August 12 (reception: 5-10 p.m.) with dozens of artists, including KCAC founders.

At the same time, KCAC — in the same location since 1986 — is hosting a big 40th-anniversary block party in the street outside 201 Wyandotte. Live music by Cachecanto, live drawing by Pop Up Charlie, woodblock printing by Nic Ortega and Erick Felix, and portrait photography by Tom Styrkowicz are among the lively (and family-friendly) free activities. Food and beverages are available for purchase from the Farmhouse and friends until 9 p.m. Inside, the Kansas City Society for Contemporary Photography presents its member show 4 Square.

Mattie Rhodes Art Gallery (919 West 17th Street) hosts an open and safe space with Kansas City’s LGBTQ Latinx and other communities of color to honor the 49 lives lost June 12 in the Orlando Pulse attack, and the 53 injured survivors. Brown Voices / Brown Pulse is from 4 to 7 p.m. Saturday, August 13. Local LGBTQ writers of color (to be announced) will share work inspired by Pulse, and people from affected communities are encouraged to share their own reactions. The gallery will also share plans for a Pulse altar for Mattie Rhode’s annual Dia de Los Muertos event, with information on how you can help.
Other events this week: