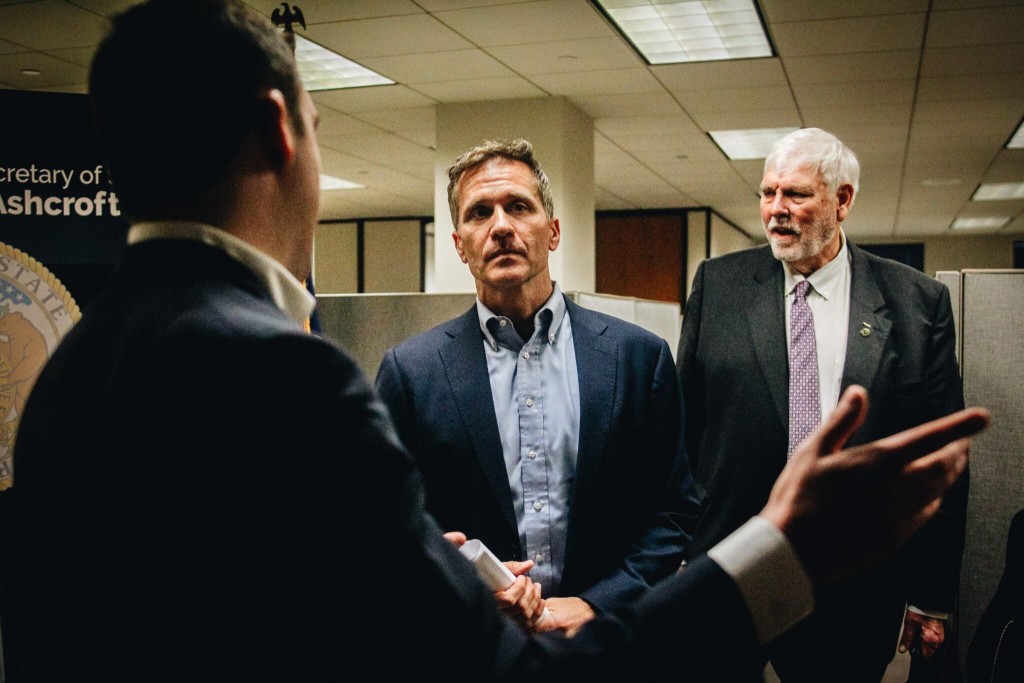 Eric Greitens is directed to a press conference with the media after filing to run in the Missouri Senate primary on Feb. 22, 2022, at the James C Kirkpatrick State Information Center in Jefferson City. // Photo by Madeline Carter

The prospect of Eric Greitens capturing the GOP nomination for U.S. Senate in Missouri was already terrifying to his party’s leaders.

He had been forced out of the governor’s office in 2018, resigning to settle felony charges and avoid impeachment by a Republican legislative supermajority.

Yet despite all that, he’s consistently led in polls of GOP primary voters, causing party leaders to publicly fret that his scandal-plagued resume could cost the party an otherwise safe U.S. Senate seat — especially if any other skeletons emerged from his closet.

Those fears seemed to be confirmed on Monday, when the former governor’s ex-wife accused him of physically abusing her and his children.

The allegations, included in a sworn affidavit filed by former Missouri First Lady Sheena Greitens as part of an ongoing child custody dispute, claim he became so unstable in the months before his resignation in 2018 that his access to firearms had to be limited.

The news rocked the already chaotic GOP Senate primary, where multiple candidates have been jockeying for position in the hopes of being the party’s Greitens alternative. And it set off alarm bells in Washington, D.C., where Republican hopes of capturing a Senate majority this November could be put at risk if Democrats can make Missouri competitive.

“I don’t know why you would want to continue the race in this case,” U.S. Sen. John Thune, the second highest ranking Republican in the Senate, told reporters Monday. “I mean, it just seems like with that coupled with all the other scandals it’s hard to see how he could be a viable general election candidate.”

Each of Greitens’ main rivals for the nomination called on him to leave the race Monday. So did U.S. Sen. Josh Hawley, who has long feuded with his fellow Missouri Republican and was among the first prominent elected officials to call for him to step down in 2018.

Even Austin Chambers, Greitens’ former campaign manager and closest political advisor during his time as governor, tweeted that the allegations were “disgusting, but not surprising unfortunately.”

Yet Greitens remained defiant Monday, retreating to the friendly confines of right-wing media to claim his ex-wife was coordinating with his enemies in Washington, D.C. and to drape himself in the grievances of other prominent Republicans who have faced sexual assault accusations — former President Donald Trump and Supreme Court Justice Brett Kavanaugh.

“Your audience has seen this. You’ve seen the lies against President Trump. You saw the lies against Brett Kavanaugh,” Greitens said during an interview with former Trump adviser Steve Bannon. “RINOs are now working to make more false allegations.”

He denied all of his ex-wife’s accusations and vowed to produce evidence connecting her to Senate Minority Leader Mitch McConnell, who Greitens has vowed to oppose if he joins the Senate next year — a position seen as a direct attempt at currying the favor and possible endorsement of Trump.

Meanwhile in Missouri, the affidavit from Greitens’ ex-wife now hangs like a shadow over the Senate primary.

She claims that as his political career became engulfed in scandal, and his aspirations for the White House began to crumble around him, Greitens became increasingly violent — toward her, toward his children and even toward himself.

Things got so bad, she claimed in the affidavit, that she began sleeping in her children’s room to keep them safe from their father, who was not only physically abusive but repeatedly threatened to commit suicide.

The allegations echo the ones that ended Greitens’ tenure as governor.

A woman with whom Greitens had an affair in 2015 testified twice under oath in 2018 that he led her down to his basement, taped her hands to pull-up rings, blindfolded her, spit water into her mouth, ripped open her shirt, pulled down her pants and took a photo without her consent.

She said that as she tried to leave, Greitens grabbed her in a “bear hug” and laid her on the floor, fondled her, pulled out his penis and coerced her into oral sex while she wept “uncontrollably.”

Two of the woman’s friends testified that she told them a similar story at the time of the incident, as did the woman’s ex-husband.

A bipartisan legislative committee — five Republicans and two Democrats – concluded that the woman’s testimony was credible and began impeachment proceedings.

But a second felony charge, surrounding allegations that he stole from a veteran’s charity, was only settled as part of a plea agreement that included his resignation from office.