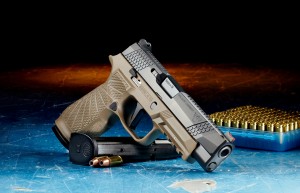 A bill passed by Kansas House members last week would lower the legal age to carry concealed firearms from 21 to 18.

House Bill 2058 would require an eight-hour safety and training course for concealed carriers ages 18-20. Currently, 18-year-old Kansans can carry a gun openly but it cannot be concealed.

Those in favor of lowering the concealed carry age argue this should not be a question if these young Kansans can serve in the military and are eligible to vote. This argument echoes a similar debate on lowering the drinking age during the Vietnam war. During the 1970s 29 states lowered their drinking age to 18,19, or 20.

Bill 2058 would affect other states because it expands concealed carry reciprocity, meaning 18-year-olds from other states could conceal carry in Kansas according to KSNT.

“I think that if you’re a law-abiding citizen, and you go get training, and you jump through all the hoops in order to get your license, and you just want to be able to protect yourself and your family, you should have every right to be able to do so,” says Rep. Blake Carpenter, a Republican.

One opponent of the bill, Rep. Stephanie Clayton, a Democrat of Overland Park, says people who support this bill are coming from a good place, and is commendable for people to want to protect themselves and others.

“Having been there in that type of situation, I know that just because you intend to protect people doesn’t necessarily mean that’s going to happen,” Clayton says. “We all like to think that we could be the hero and shoot someone in the thigh and disarm the shooter and save tons of lives. But it goes so fast.”

Clayton believes more robust self-defense and active-shooter training are needed in this bill. Rep. Barbara Ballard, an administrator at the University of Kansas and Lawrence democrat, says there are concerns from many of her constituents about guns on a college campus but Ballard supports it.

Anyone 21 years and older can currently carry a concealed gun into nearly any campus building under Kansas’ 2017 “campus carry” legislation. The only time this couldn’t happen is if a building had a metal detector such as in prominent venues like Allen Fieldhouse.

“I would like for us to have concealed carry on our campus so that faculty would feel comfortable not worrying about what might happen if they give someone a bad grade or you get in a disagreement with a student, or they don’t want to be hired by us because they see, because we put on our website, and we have to, that we are a concealed carry campus,” says Ballard.

Many student employees are under the age of 21 but it would be very rare to have an 18-year-old professor. There are student Teacher Assistants in classrooms but the responsibilities of the TAs, such as giving out grades, vary between classes.

Behavioral immaturity of young people is a concern for those against Bill 2058 because a teen’s brain is not fully developed until age 25 according to the U.S. National Library of Medicine. The prefrontal cortex, where reason and judgment occur, is one of the last regions of the brain to reach maturation.

“I’m concerned that we are setting adult teenagers up for trouble,” says Rep. Jo Ella Hoye, a democrat of Lenexa. “HB 2058 is a far-reaching and extreme bill.”

Noting gun buyers must be 21 under federal law, Hoye asks, “Why would we encourage young Kansans to load and hide a handgun on their body that they aren’t even old enough to purchase at a federally licensed gun dealer?”