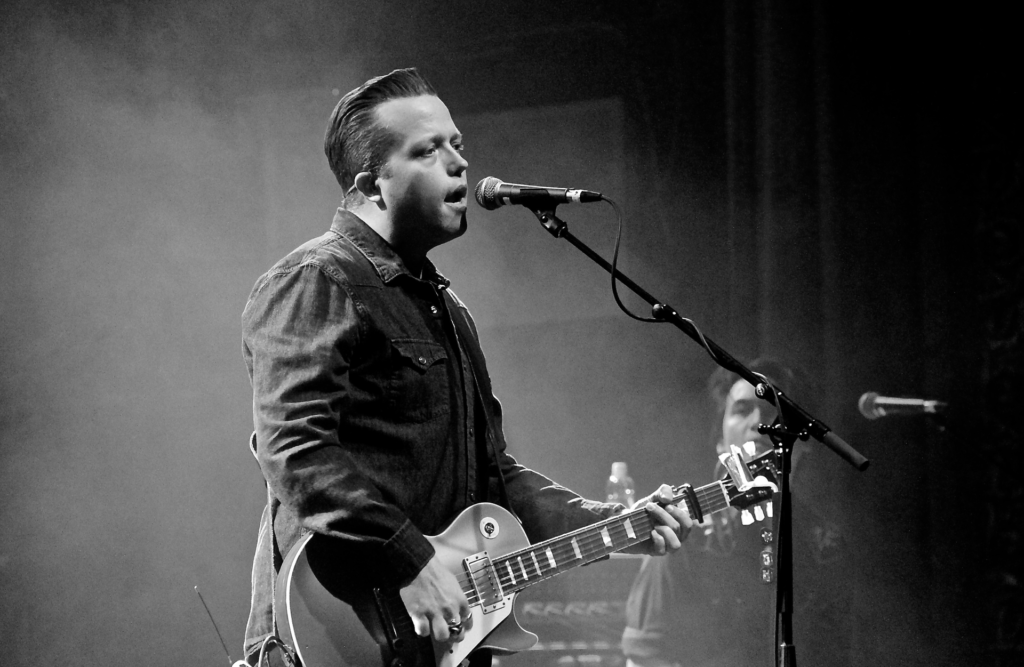 Artists like Jason Isbell bring out crowds that make for excellent people watching, with last night’s Uptown audience proving to be no exception. A good portion of the attendees were clearly on dates (because damn, can Isbell write a hell of a love song), but the Americana Music Award-winning artist also brought out an older crowd. There were people a little rough around the edges, people who, in some cases, looked like they could deeply relate to the hardscrabble Southerners from Isbell’s songs. This crowd came to love hard on Isbell, and throughout the night he proved over and over again why he’s earned their devotion. 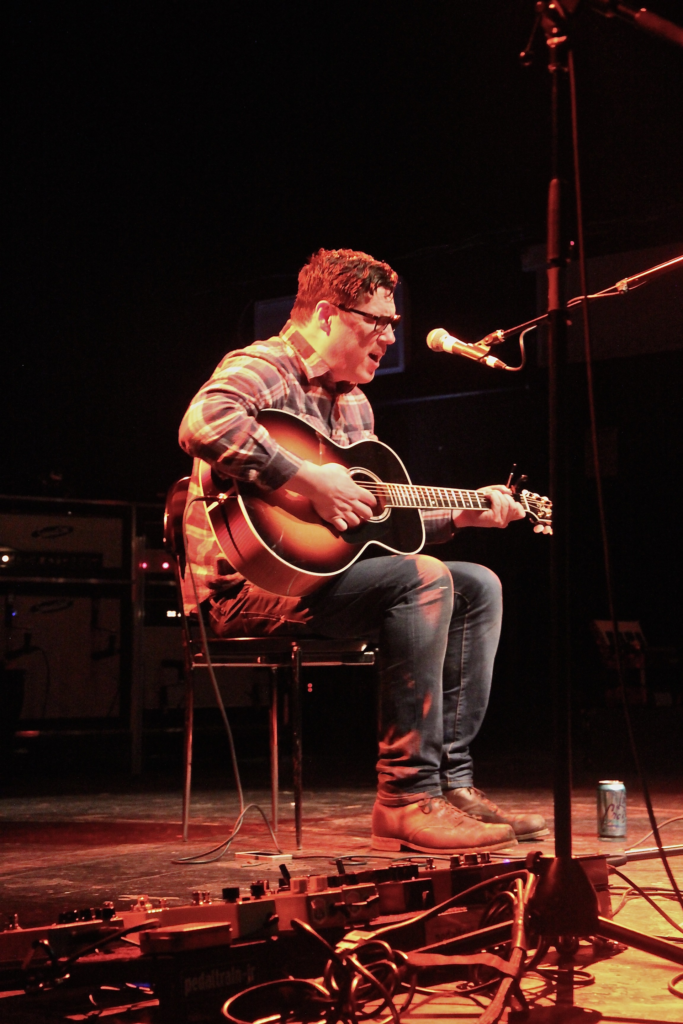 The night’s show was opened in a somber fashion with Damien Jurado, whose beautiful and subtle style laid a calm tone for his set. He sat under a warm spotlight in the center of the stage, looking rather lonely and in deep concentration. Jurado, an amazingly prolific songwriter with nearly a dozen albums under his belt, specializes in pulling an audience in with a well-crafted story. Even in the large Uptown space, he was able to set the scenes for his types of stories: A hospital room in “Cloudy Shoes,” a street scene in “Ohio.”

Jurado delivered a strong 45-minute set, playing both rhythm and melody on his guitar. And about half an hour in, he realized he’d forgotten to introduce himself. 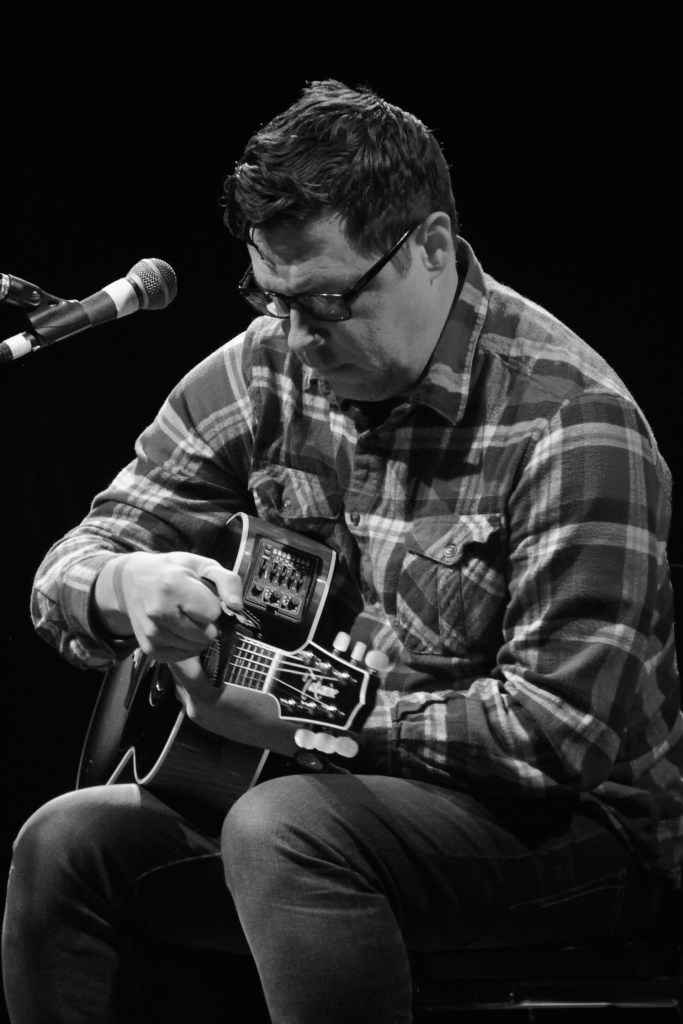 “Oh. My name is Damien Jurado, and I’m from Seattle, Washington,” he said, slowly. “I’ve been on this tour with Jason Isbell since the beginning of this month. He is going on, and I’m continuing to play people’s living rooms. This has been very different, but I’m glad it ends this way.”

He then introduced the song “Sheets” as a “song about infidelity.” The live solo delivery lent a heft to his songs, which in their recorded versions are lightened up with clinky keyboards or light percussion. He remained seated until the last moments his final song, “Horizon,” when he stood and bellowed into the microphone. It was effective, dark and over far too soon. 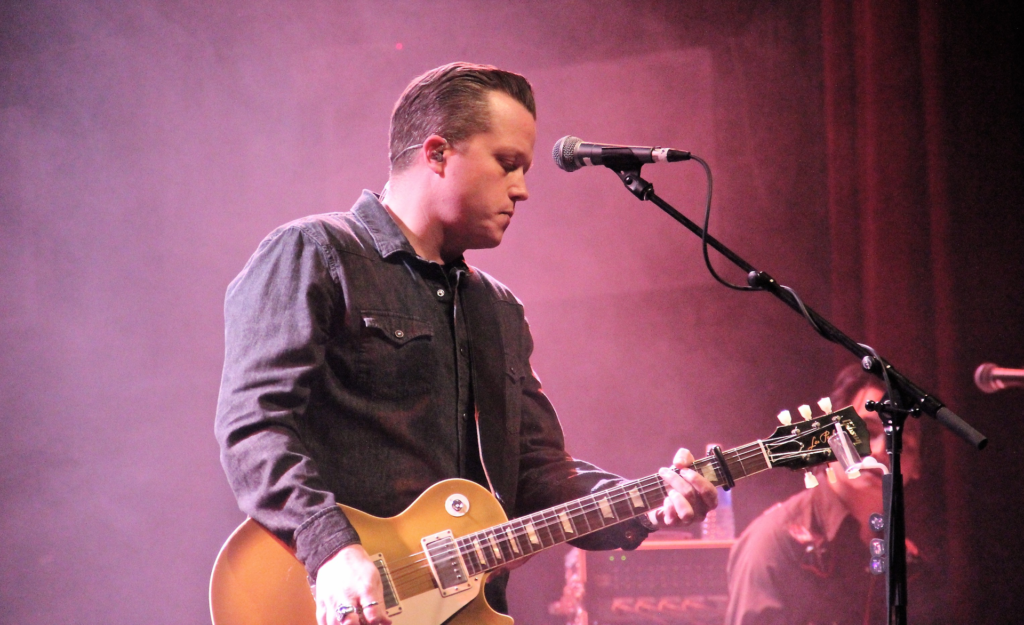 The star of this frigid night was Isbell, however, and he came to the stage warmly received by the audience (some members were happy to offer him ovations before he even began). He smiled, opening with “Stockholm” from 2013’s nearly universally well-received album Southeastern. It would have been some icing on the cake had Isbell’s wife, Amanda Shires (a KC native), been able to join him at least for harmonies on this song, but as Isbell later told us, she and her band had recently been stuck in an epically bad weather-related traffic jam in Tennessee and wasn’t up for this trip.

Isbell let his music and his instincts as a storyteller guide the way through the first part of his set, and the band, the 400 Unit, played as tight as a band on the last night of its tour. His impromptu storytelling skills came up for display after about four songs of his set, when he described his early songwriting process while he was with the Drive By Truckers. 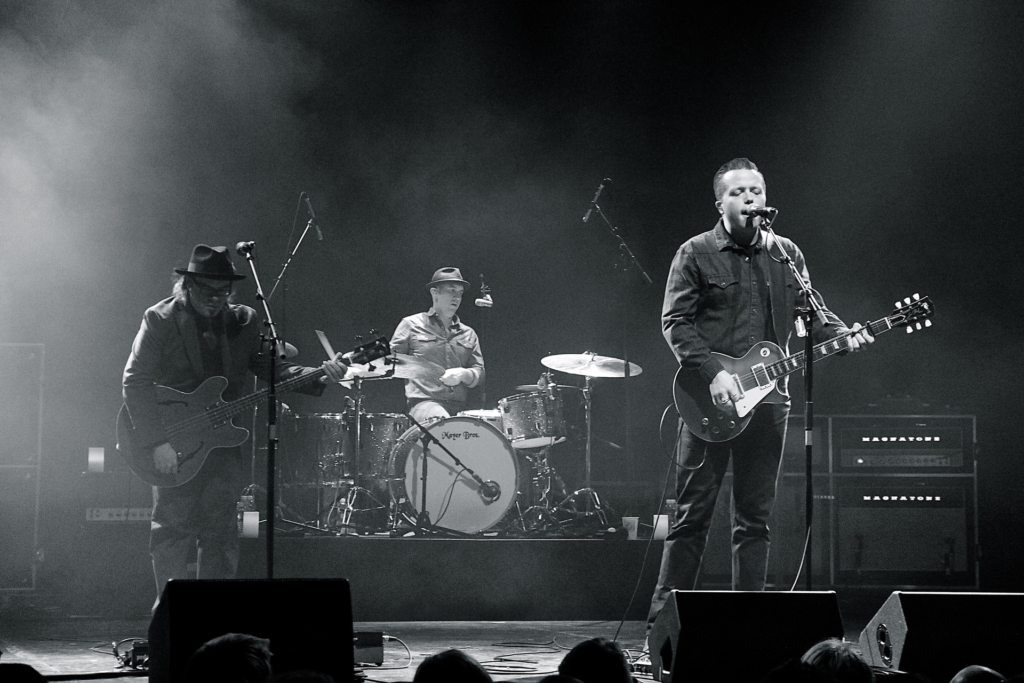 “When I was young and just startin’ out, I used to write songs about whatever I wanted to write about, ” he said. “Then I got to be about 21 years old and I was in a band, and people started to listen to that band. I was not an interesting person — because I was 21 years old. So, I started writing stories from my family, stories that I’d hear at family reunions. Made for some interesting family reunions [in the future]. This is one of those songs.”

With that, he launched into “Decoration Day,” one of Isbell’s signatures, and a song that elicited one of many “Gaw-damns!” from the man in the Carhartt union suit seated behind me. That man’s exclamations became more frequent as the night went on, and I found myself progressively agreeing with each one of them. Yes, goddamn, Isbell is that rare of a songwriter and storyteller.

The largest audience response came for a love song. Isbell introduced “Cover Me Up” as “a romantic song. Back home it’s called a couples’ skate. I wrote this song specifically for my wife, so I sing it for my wife.”

You could feel the audience sigh with internal awwws, both for the sweet introduction and as Isbell sang of his wife and of her helping him become sober: Home was a dream / one that I’d never seen / ’til you came along. 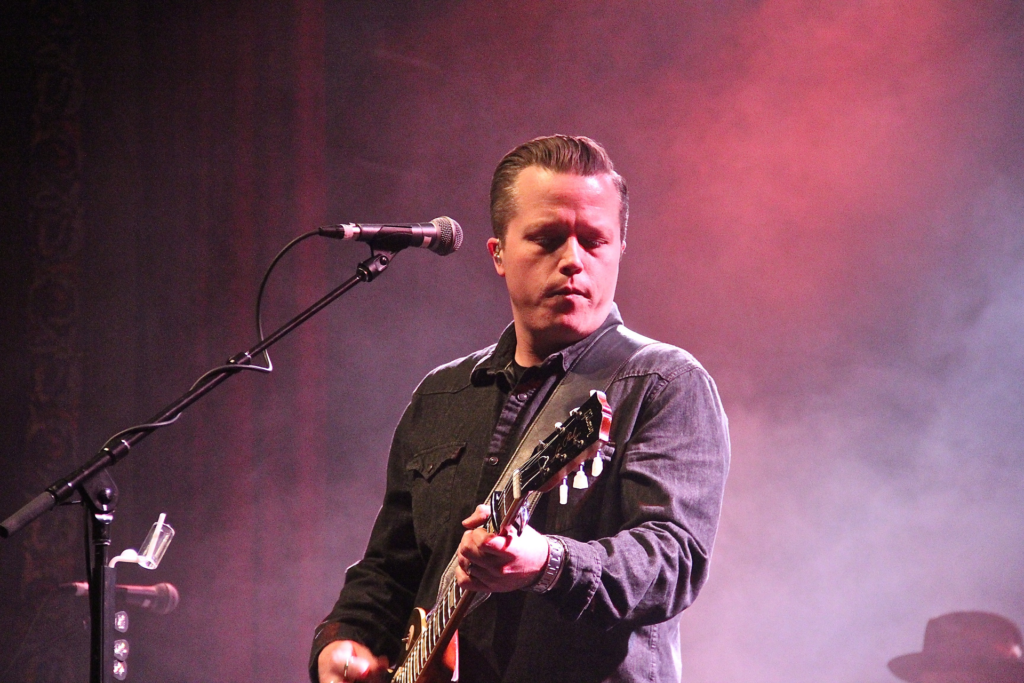 The story most emblematic of Isbell’s talents came as an introduction to “Live Oak.” Isbell described a show he had recently performed at an outdoor venue, one which allowed children (“Not usually a thing we do.”). In the front row was a young girl of about nine years old with a homemade sign that read, “Live Oak.” Due to the dark nature of the song, Isbell thought that was really strange, and if it could actually be the child’s request, or perhaps rather was her father’s, which would seem more appropriate. She responded that it was her own most favorite song, and he played it for her. Later, when he met her and her father after the show, she had an additional question for him: How does the girl at the end of the song die?

“I never quite specify,” explained Isbell. “Well, if I don’t answer this correctly, I could cause this young lady some psychological troubles. So I need to think on my feet here. So I thought fast, and I thought I was doing a good job, so I said, ‘Maybe she doesn’t die. Maybe she just gets buried.’ ” The audience then erupted in laughter.

“Turns out that was not a good answer… She gave me a face which is pretty much reserved for girls between the ages of eight and twelve, a very singular combination of horror and disgust. And her dad said, ‘Well, thank you very much. That’s going to be a great four of five weeks of explaining.’ “

Hear the longer version of that story here (excuse the poor audio quality): 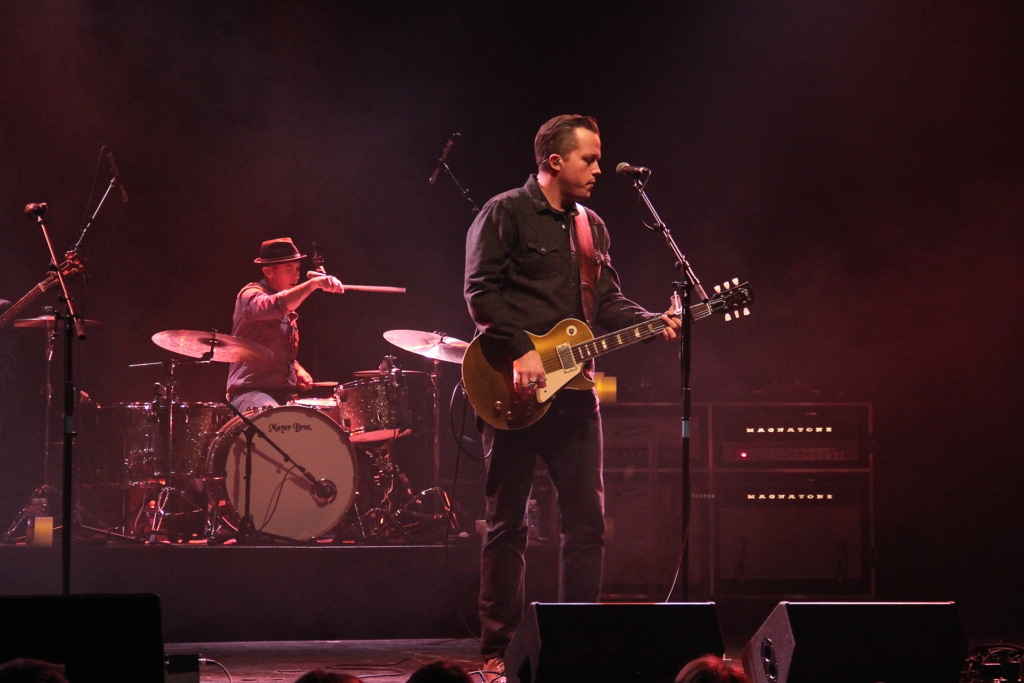 Isbell rounded out the last half hour of his nearly two-hour set bit, with “Alabama Pines” and “Never Gonna Change,” as well as the gut-punch cancer song “Elephant,” in which Isbell slams listeners home with this particular reality: There’s one thing that’s clear to me / no one dies with dignity / we just try to ignore the elephant somehow.

About ten minutes after Isbell sang that line, the night, which for three hours had been a sweep of story and sheer talent, made an abrupt turn. (Typically irrelevant detail: I had found an open section of seats near the back of the venue downstairs to enjoy most of the show, and was plunked down happily on an aisle seat). Suddenly, as the band crashed its way through “Never Gonna Change,” a woman ran up to the trash can not 20 inches from my head (that honestly I hadn’t even realized was there) and put her hands around its rim. I probably wouldn’t have noticed her, except she proceeded then to violently and audibly throw up into said trash can, without warning. A man – who I assume was her date – drunkenly clung to the wall behind her.

The mood of the show was, for me, effectively ruined. I bolted, regrettably missing Isbell’s encore. I’m positive it was as great as the rest of this show. Word to the wise: Avoid aisle seats near trash cans. Lesson learned.