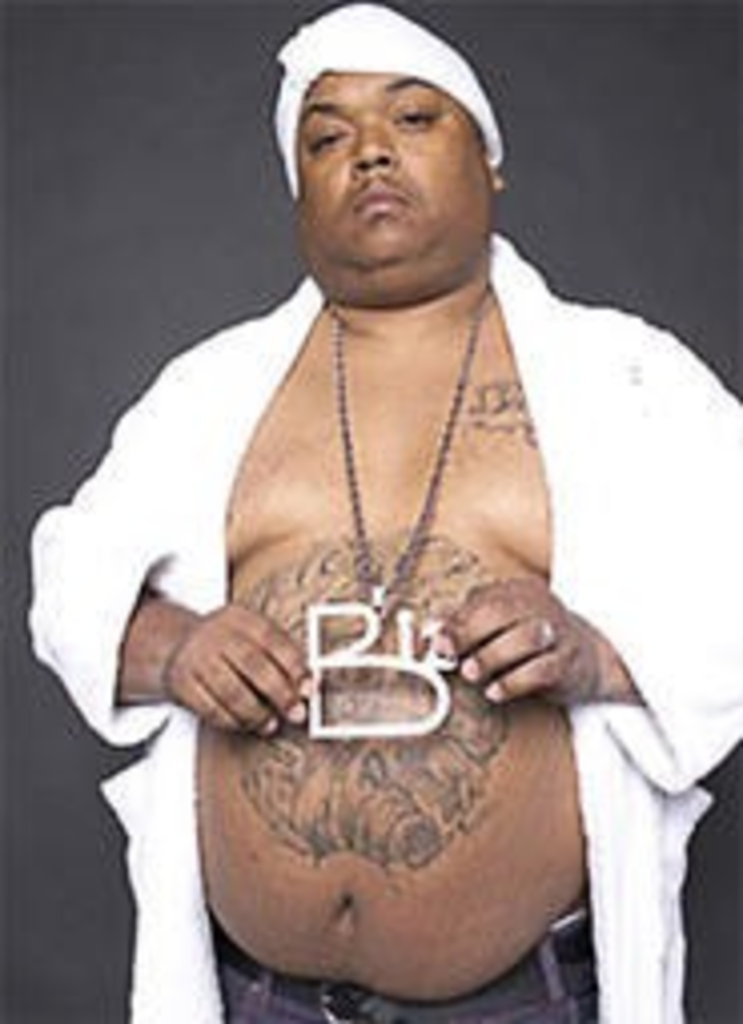 Anyone who has a passing familiarity with comic books will recognize the character Bizarro. Superman’s imperfect doppelgänger has gone through many changes over the years, but, as originally envisioned, Bizarro was a sympathetic character — a villain, sure, but one whose many mishaps made him far more human than the Man of Steel. In short, he was a lovable fuckup.

It’s hard to think of the rapper Bizarre (Rufus Johnson) in quite the same way; years of rhyming about the most ghastly subjects imaginable will sometimes have that effect. In his introduction to the world, on Eminem’s 1997 Slim Shady EP, Bizarre packed a lot of living into just 16 bars. He confessed to having oral sex with transvestites, murdering an elderly man, killing his grandmother, robbing a paperboy, terrorizing day-care centers and craving dog meat. Oh, yeah, don’t forget: My girl beat my ass and shot me in the back with a two-piece/’Cause she found out I was having an affair with her 10-year-old niece.

Now those are scenarios that even a top-dollar PR firm would have trouble spinning — and Bizarre was just warming up. Playing Eminem’s disturbed sidekick on a pair of albums from Shady’s D12 crew, the Biz’s subsequent rhymes violated social taboos that even such freaks as Kool Keith, the Geto Boys’ Bushwick Bill, and Detroit’s Esham never dared touch.

But as difficult as it may be to believe, Rufus Johnson is just a regular guy in many respects. It’s a side you can clearly hear on one of Bizarre’s newest songs, available for free from his Web site (Bizarresworld.com): All I do is drink and smoke/’Cause I’m a fuck-up/Just to let you know.

It’s too bad he’s giving the tune away, because “I’m a Fuck Up” might just be the best thing he’s ever done, an everyman’s lament that could strike a chord in anyone who has ever fallen somewhat short of expectations.

Today, I got a new job/I hope I don’t smoke/Working at the nursing home/Takin’ care of old folks … /I’m a loser/I should be buyin’ my son a bike/Instead I’m out buyin’ myself a pipe … /I’m the reason my daughter got asthma/I’m a fuck-up/A natural disaster.

Yes, he lists “chewing on toilet paper” among his “Hobbies and Interests.” But Bizarre also likes fishing, something he learned from a grandfather back in Detroit. Yes, he once famously rhymed about indulging in a ménage à trois, plus a midget. But he’s also a family man, happily ensconced in Georgia. He rapped about his domestic bliss “Comin’ Home,” a surprising Raphael Saadiq-produced soul stirrer on Hanni Cap Circus, Bizarre’s 2005 solo debut.

And just like all of us, Bizarre has partied too hard, allowing his work to suffer because of it — if on a somewhat different scale: Hip-Hop Summit/Russell Simmons wanted me to show love/I got so high, I forgot what day it was/Jay-Z wanted to sign me/He picked me up in a limo/Two years later/I still ain’t gave him my demo.

In fact, if he traded his ever-present shower cap for something warmer — and covered his tats and his perpetually exposed girth — Bizarre could pass for jolly old St. Nick.

I’m gonna get you a PlayStation next year for Christmas, baby/But this year, you just gotta sit tight with this Atari 2600/I got you two games … Pac Man and … Ms. Pac Man.

OK, maybe not. Still, it’s clear that beneath the excess, the perversion and that massive gut lies a guy riddled with imperfections who might not be too dissimilar from you and me. And if that makes you uncomfortable, look at it this way: There’s a little Bizarre in each of us. And if that still freaks you out, then download “I’m a Fuck Up” and judge for yourself how bizarre Bizarre’s Bizarro World really is.

You might be more surprised than the Biz’s kids on Christmas morning.