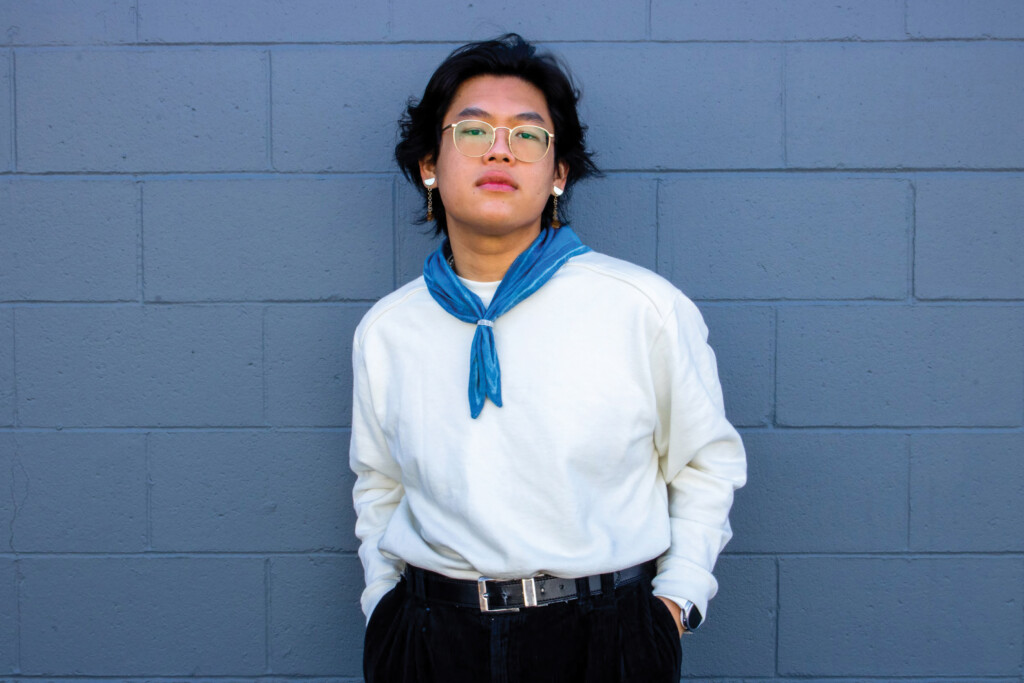 Entering an artist’s studio is like opening a diary. What is more intimate than viewing erratically displayed concepts as though there is no manner to extricate their thoughts quickly enough? Hùng Lê’s studio is a display of passion, with project outlines covering the walls, a garment rack of reclaimed fabric in the corner, and the studio pet—a vat of indigo dye—filling the space.

Lê is a Vietnamese artist using his voice to uncover personal narratives as an Asian American in the Midwest. Creating art to share his experiences with immigration and adaptation, Lê challenges the concept of the American Dream and its faulty construction in modern society.

Originally from Đồng Nai, Vietnam, his family immigrated to the United States when he was seven, building a home in Baton Rouge, Louisiana. After moving to the U.S., Lê had to quickly adapt to educational and social settings as he learned to speak English, using art to find a common ground in expression. Without words, Lê was able to express himself in an unrestricted manner, recognizing the power of art from an early age.

As language barriers subsided, Lê still found himself faced with an acute awareness of societal interactions and how his identity played a role in the way he was perceived. 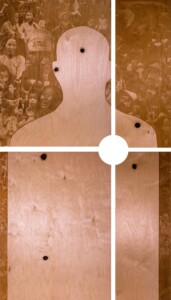 “The Catholic school I went to was predominantly white, so I was aware of my identity at a very young age. I mean, when everyone looks different from you—you notice,” says Lê. “I had made some other Asian friends, and I feel like we connected really well together because of that.”

During this time in his life, Lê’s hobby for art evolved into an outlet to process his feelings of being ‘othered’ as a Vietnamese immigrant in a predominantly white community. His art evoked a sense of power—freedom to express what has been suppressed—in an adamant reclamation of his identity.

Lê pursued a BFA in Fibers and Asian Studies Certificate at Kansas City Art Institute. Since graduating in 2021, Lê has drawn the attention of the local and national art scene, receiving multiple awards, including the Windgate-Lamar Fellowship, the Jesse-Howard Fellowship, and the Lead Bank Emerging Artist Award. Using fabrics, photographs, and found objects, his work covers the expanse of memories and history to define personal identity.

One facet of Lê’s work is his social commentary on societal gender norms, elaborated through his garment studies. Early experiences witnessing the transformative power clothing has on an individual’s self-perception piqued his interest in garment work.

“Growing up, I saw my mom and all my aunts dress up every weekend to attend church. That kind of transformation of working basically 12-hour shifts, or whatever it may be that day, in their basic necessity clothing—and seeing the transition of her putting on her best clothes for church and socializing with her friends—I saw what clothing can do for people,” says Lê.

Watching the women in his life undergo Cinderella-like transformations each week inspired Lê to explore expression in an authentic way.

“I wanted to get earrings, and my mom was so adamant that it is a feminine thing,” says Lê. Conservative views on gendered clothing items and accessories turned into a challenge of unraveling these expectations within himself. 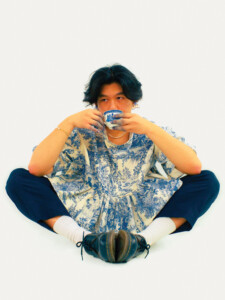 Lê says, “Eventually, I got earrings, and we made a promise that I would only wear studs—so I didn’t.” This first step in exploring gender expression has turned into a regular artistic study, as well as a manner of living his daily life.

His first venture into garment making was for a final project at KCAI in 2020. The assignment was open-ended, allowing students to choose their artistic medium. “I really wanted to make a dress, and looking back, it’s horribly structured, but it was my first dress,” says Lê. “I started getting more interested in the cultural aspect of clothing, which led to exploring gender performance and what we associate as feminine and masculine clothing.”

The dress became his first iteration of the “Gender Implication on Garments” series, which continues to evolve with each annual installment. By documenting his work on film, Lê is able to add a performative element to his art that captures a still-life, biographical documentation of his artistic career. The curated expression meticulously documents personal changes with annual additions to his portfolio.

Spending most of his life in the U.S., Lê often struggles to recall experiences from his childhood.

“It’s a weird limbo where I can’t tell if it was a dream or an actual memory, and there’s not really a way to validate it,” says Lê.

The series “Stitched Memories” uses storytelling to understand himself better and develop a method of navigating his family history. The collection of family photographs stitched with red thread focuses on building off of history as opposed to viewing it as stagnant.

“Actively making and remembering within a history that wants to erase its past is an act of defiance toward mainstream narratives,” says Lê.

Red, white, and blue are popular tones in Lê’s collection, representing American society while also paying homage to Vietnam. The captivating blue hue across his work is a product of an indigo dye, a practice found in Vietnamese fabric work for centuries. Though synthetic dyes have taken over a major portion of the modern dye process, the Indigofera plant from which the dye is derived is indigenous to Vietnam and continues to be a centerpiece of textile artisans in the country. 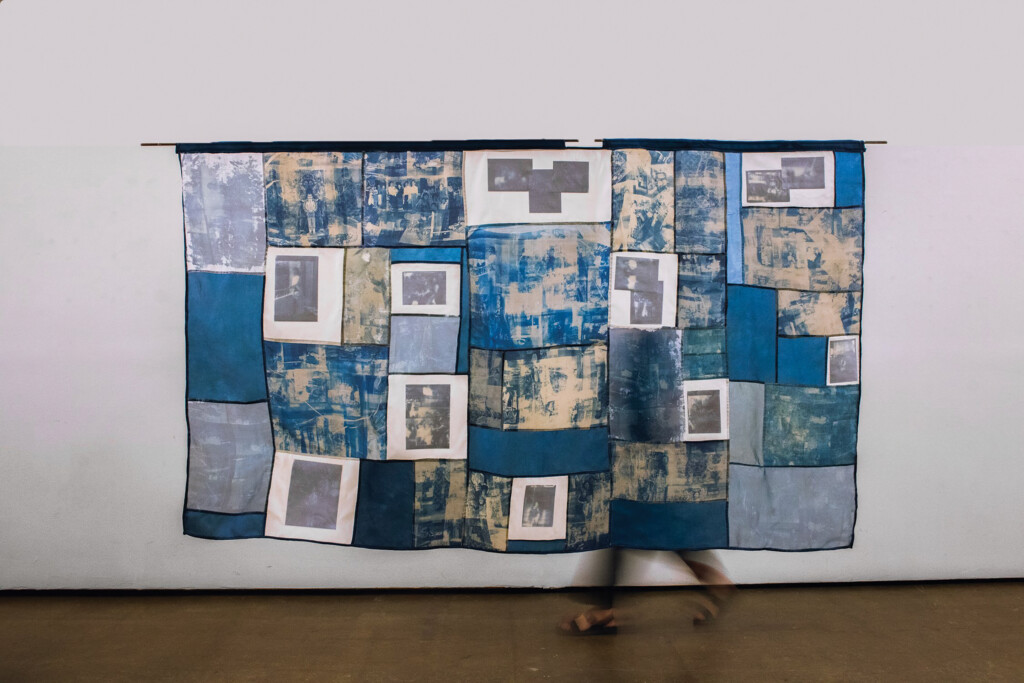 Bringing awareness to the subjectivity of historical accounts, his piece “Target Practice” comments on the harrowing tragedies that ensued during the Vietnam war. The laser-engraved wood plank contains images captured during the war, showing the ruthless brutality of the U.S. military towards the people of Vietnam.

Personal memory—preserved through photographs and heirlooms—often starkly contrasts the collective and national memory found in modern education and other media sources. Skewed and vague curricula in the education system do not fully cover global events, utilizing cherry-picked accounts that erase significant portions of unfavorable national history.

Lê recalls the information gap he witnessed throughout his education in the United States, specifically about the Vietnam War.

“Whenever I was in high school, and we were going through history books, you would get chapters and chapters of, like, George Washington,” he says. “We would spend weeks on end on these topics, but when it got to the American war in Vietnam, it’s like two pages before moving on. I think that piqued my interest in information and how it’s kept—I’m always looking at how memories are formulated.” 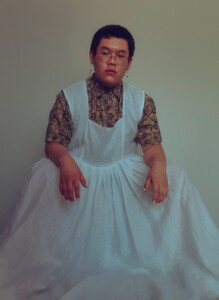 This power to control history and information flow is only increasing as measures in recent years have pushed toward censorship across public schools and libraries. History’s facts and narratives are in danger of being lost or misinterpreted as culture wars are waged globally in our digital misinformation era. Right now, it is equally as important to seek authenticity in facts and preserve the emotional hardships that have arisen in a time where creation is seen as an increasingly volatile and political act.

“The historical accounts I’ve been exposed to have been told from a very Americanized perspective—it often portrays Vietnamese people as having no agency or, like, being saved by America. I’m interested to see how the same stories are told from a Vietnamese perspective and what they choose to remember as a nation,” says Lê.

Lê uses his art as a space to process his memories of Vietnam and the adaptation his family experienced through immigration, allowing him to approach the duality of his identity in a reliable physical form. Art is a tangible investment in his personal history, as well as a way to share the fragility of records and the human experience.

“My work requires that I constantly examine my position within American society while also questioning who gets to be the keeper of history and who is left behind and forgotten,” he says.

Lê’s work recently culminated in his first solo exhibition—Bảo Ơi,—last May at the Four Chapter Gallery in Kansas City. The show was titled after his Vietnamese name, Bảo, which only his close relatives use.

“There was a negotiation in my identity as my name was morphed a little bit,” says Lê. “I was thinking about the shift of identity in terms of a name change and how it relates to immigration on a macro and micro scale. The macro is the American war in Vietnam and how it shifted my family to immigrate to the United States, and the micro is essentially how that’s affected me.”

The show was an accumulation of three years of work unearthing his thoughts surrounding personal identity and reconnecting with lost versions of himself. The exhibition featured wall and hanging installations of his fiber work, photography, and writing. Lê’s artist talk at the opening reception served as a letter to all versions of himself, expressing gratitude for his journey thus far.

“Bảo Ơi is like a call to self,” Lê says, “The boy in Vietnam is this ghostly person that lingers around me. My exhibition was an investigation of that experience.” 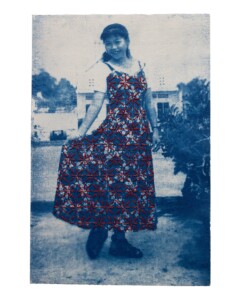 Lê was recently awarded the prestigious Windgate-Lamar Fellowship from the Center for Crafts, which will fund a research trip to Vietnam for the first time since childhood. During the three-month trip, he will be traveling through the country—exploring the culture and reconnecting with his past experiences and memories. The trip will also include woodcarving classes in Hanoi and a workshop on the traditional indigo dye process in Cao Bằng.

“From February to April, I will be documenting my hometown, visiting various national museums and art galleries—-from Saigon all the way to Hanoi,” says Lê.

Above all, Lê is excited to reconnect with family and friends—especially his grandmother.

“I miss her a lot. There’s a photo of us at the airport, hugging each other and crying the day I left, and I’ve been using that image a lot to inspire my work,” he says. “All of it combined is nerve-wracking but also very exciting.”