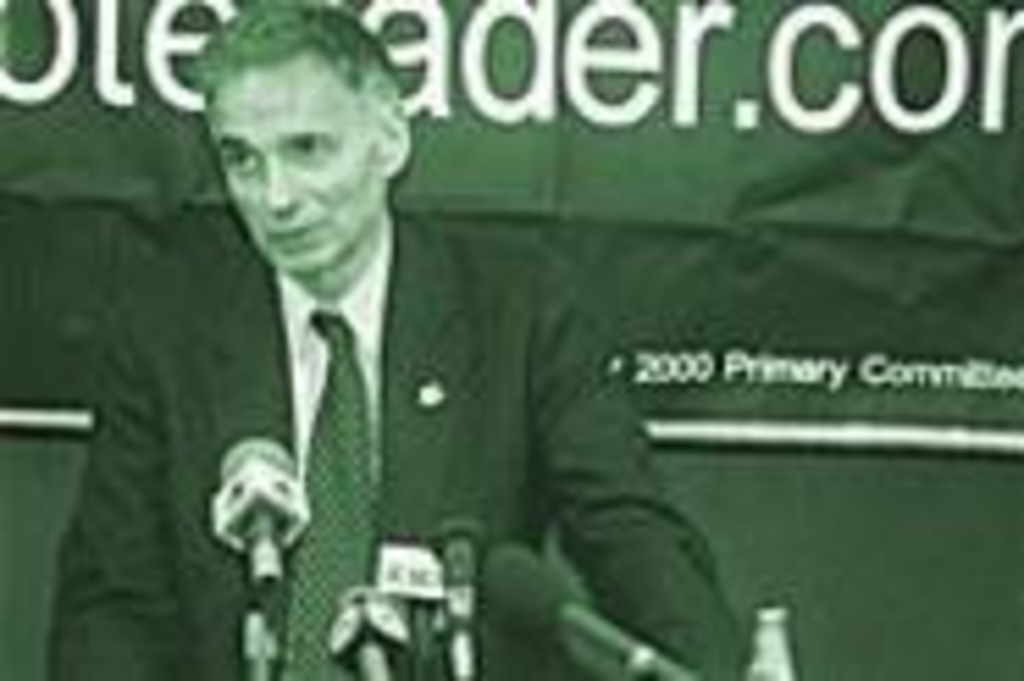 There’s nothing touchy-feely about Ralph Nader. He’s not teddy-bear cuddly or even the back-slapping type. Nader is just intense. Not the kind of in-your-face intensity, because his presence in a room can be rather low-key, but the switch-is-always-on level of heat. He entertains a relaxing sense of confidence, branded in intellect and aggressive in Nader’s sense of what is right and just.

In person, he looks like he does on TV: tall, somewhat ashen in skin tone, and, despite the ongoing public references to his frugality in dress, able to carry a suit pretty well. Add a carnation and he almost could be accused of being a snappy dresser. And he shows his political legs. Prior to his press conference on June 23 at Kansas City, Kansas, Community College, Nader worked the room a little, stopping by to chit-chat with Kansas City Star reporters and columnists before taking the podium. The TV people, from channels 41 and 9, didn’t get the same stroking. One can assume Nader watches very little television.

Nader opened the press conference with parts of the stump speech that he would deliver later to nearly 300 people in the Performing Arts auditorium. There’s a no-holds-barred aspect to Nader’s standard remarks, no hesitation to name the causes of many of America’s ills. If Gore or Bush uttered those remarks, corporate campaign contributions would dry up like apple slices left on a sunny window sill.

“Big business controls government, the workplace, and the environment. It’s important to detail what that means,” Nader said about his campaign. “Voters shouldn’t have their vote nullified by cash-registe r politics.”

Corporate influence in people’s lives and on the political system, resulting in businesses’ getting special treatment and taxpayer subsidies (some $200 billion a year by Nader’s estimates), is the centerpiece of his message. Letting that influence continue and go unanswered threatens democracy, and Nader, while maybe not filled with love of people in that squishy New Age parlance some observers may mistakenly attach him to, clearly believes in people’s power and their ability to take control of their future.

“Corporate welfare is a major issue,” he said. “By ending it, billions of dollars can be saved for people’s needs.” Getting the rich off welfare, he added, is essential. “Wouldn’t want them to lose their incentive to work and go beyond five years being on the dole,” Nader said satirically, in reference to the Republican- and Democrat-supported welfare reform legislation that pushed millions of poor people into mainly low-paying jobs.

It’s not so much that welfare reform is wrong, but that politics in America is not just or fair as wealth gets more concentrated. “We can have democracy in this country or we can have great wealth concentrated in the hands of a few. But we cannot have both,” Nader said, quoting Supreme Court Justice Louis Brandeis. “It’s time for a new politics.”

With that statement, Nader opened up the floor for questions from members of the local press. KMBC Channel 9 reporter Micheal Mahoney wasted no time, accusing Nader of not addressing the issue “most on Americans’ minds — the price of gas.” Mahoney, keeping faithful to the mainstream press’ narrow-mindedness in assuming the media always know what’s on people’s minds, failed to grasp that Nader and most of his supporters viewed the price of gas as symptomatic of corporate control of the political system, particularly in the government’s inability to set a meaningful energy policy based on conservation and actual production costs. Mahoney may have been surprised to know that many of Nader’s supporters view the current price of gas as still too low and secretly hope that gas goes well above $2 a gallon so that an aroused and angry public will abandon gas-guzzling vehicles and demand a nationwide energy policy separate from the oligarchy of oil companies and oil-producing countries. But after Mahoney got his 30-second sound bite, he was gone, along with a camera guy from KSHB Channel 41.

“The best way to go,” Nader explained in solving the so-called gas-price crisis, “is from an engineering standpoint. Engineers know how to do it (increase gas mileage).” Nader went on to say that presidential candidates Gore and Bush “have their fingers to the wind when most of the wind is coming from oil barons.”

In keeping with the headlines, Nader was asked about his stand on the death penalty. He answered that he had been against the death penalty since his law school days in the 1950s, calling it “no deterrent, raising the possibility of killing innocent people”; discriminatory; and simply costing more than incarcerating prisoners for life. Maybe not totally tongue-in-cheek, Nader wondered aloud whether there was “a place for capital punishment for corporations” that exposed people to harm. “They should be put out of business,” Nader said, adding that corporations historically have had their charters of incorporation pulled by government when caught committing wrongdoing.

In commenting on the drug war embraced by both major political parties, Nader called it “an acknowledged failure” and said that users of illegal drugs “should be treated as health patients and offered rehabilitation options instead of incarceration options.” Asked about free trade, Nader called it a myth — “There’s no such thing as free trade with dictators,” he said. He called America’s poor the “biggest untapped domestic market” and said companies were lured abroad to set up shop “because of (cheap) labor costs and no pollution controls.”

After the press conference, in front of the partisan crowd in the auditorium, it became evident that Nader doesn’t really like the press — an attribute most of the public would cheer. In speaking with reporters, Nader overwhelms the questioner with straight-ahead responses, devoid of spin content. When I asked him how this year’s campaign was different from his 1996 presidential run, he responded, “This time we’re running a serious campaign, going after matching funds and trying to raise $5 million (in campaign contributions).” Nader’s campaign does not accept PAC money or soft money contributions.

Nader’s answer avoided addressing the disappointment many progressives felt in 1996 when he failed to run an effective campaign and acted in near disdain when questioned about his lack of enthusiasm in running in contrast with his willingness to accept the Green Party nomination. When I followed up my question by asking him whether this campaign has changed him personally, Nader answered that there was “no difference.” But the reality of it is that Nader is different. He now is running hard and committed and is demonstrating some natural political talents that could make him a formidable opponent, if the media granted him equal political footing with Gore and Bush. Maybe he sees no personal changes within him, but the public — given the chance to hear his message and see him campaign — will.

Before his supporters, Nader pressed home the point that “Every time the people have risen to combat concentrations of wealth, the country was better off,” using the populist/progressive era in the late 19th century and early 20th century to illustrate his statement. “Solutions are on the shelf,” Nader added, “but every time we try to make progress, the dominant business community says no.”

Nader’s nomination as the Green Party presidential candidate on June 25 is a direct run against that domination. “This is not nostalgic wistfulness on my part,” he said of his campaign, adding that this country was built by “people who went out on a limb.”

Outside of a political miracle, Nader won’t capture the presidency in 2000, though he is likely to be on at least 45 state ballots. But what he may do is lay a solid foundation for the Green Party into the American electoral landscape. “The purpose of leadership is to provide more leaders, not more followers,” said Nader.

It’s a point lost on the Republicans and Democrats — unless, of course, you have money to give them.