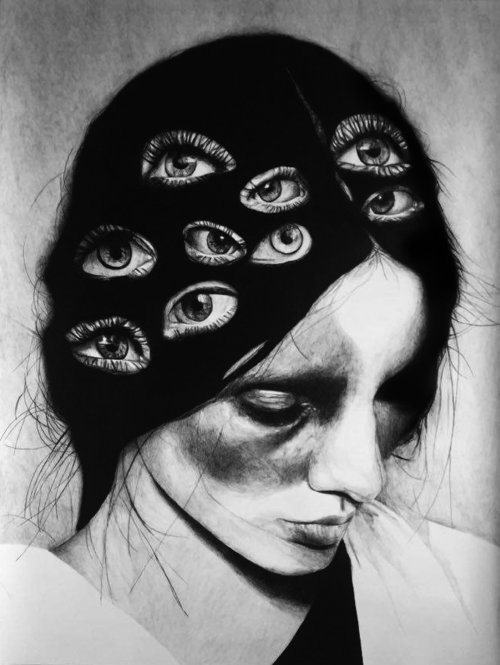 Finding a common thread through the many materials used in “Darkness with Blue Sky” is, at first, a disorienting task. Ceramics, a series of pencil drawings, actual dirt, and an image made entirely of drilled holes might lead one to believe the artist has suffered some kind of mixed-media identity crisis. But French-born Myriam Mechita hasn’t made a successful decades-long career through a lack of focus. In fact, she has used the same visceral childhood experience to push the limits of her practice as she continues to press down on the same themes. Currently exhibited at Rockhurst University’s Greenlease Gallery is a collection of work from Mechita’s breadcrumb trail that leads us to her core philosophy: holiness, pleasure, and wisdom are often, or always, born of pain.

Mechita was deeply affected as a child by a reproduction of Fra Angelico’s “Beheading of Saint Cosmas and Saint Damian.” The Italian painting depicts the death and simultaneous birth into canonization of Cosmas and Damian. Two saints lay slumped on the ground, their disconnected heads wreathed in a golden halo. An executioner stands poised with sword over shoulder, aimed at a middle-ground figure who kneels and bows at the acceptance of their fate. Something clicked in Mechita’s six-year-old brain that lit the first spark of her artistic inklings. Since then, she has expanded the decapitation theme in her work to explore the invisible line between pain and pleasure.

The beheading theme comes through in the ceramic faces that point up from piles of mulch on the gallery floor (more on that later). Earthly pain takes a form different from transcendent pain, visually described as either an incomplete or redacted body, or holy figures twisted into shapes of agony. Wisdom is represented in scabby pencil drawings, like the bowed head in “Vinci’s dream,” where a woman sprouts nine extra eyes on top of her black hair, the eyes framing her bruised face. This image laughs at the tidy representation of a third eye, placed neatly on the brow above the original oculars. Wisdom, as Mechita suspects, is also a grotesque burden on those who earn it.

“Darkness with Blue Sky” is a show of contrasts. The seriousness of the subject matter is punctured by moments of dark humor. “Lucky River” — a glossy ceramic dog head on a minimally sculpted glass body — interjects moments of haphazard recomposition via two contrasting materials. Sculptures like this make it easy to imagine the executioner has suddenly changed her mind, or approached decapitation (recapitation?) as one would a blank Mr. Potato Head: by shoving two incompatible parts together to create a Franken-version of the original thing.

If there is an omniscient being governing the universe, its decision to make sexual pleasure resemble religious worship suggests an eccentric sense of humor. On the south wall, the artist has installed a pointillistic version of two veiled figures by puncturing even, equally sized holes in the plaster — a method Mechita refers to as “drill drawing”. (According to Anne Austin Pearce, the gallery’s curator, the origin of Mechita’s drill-drawing method comes from a group exhibition wherein the artist was denied the same drawing tools provided to her male counterparts. Her response was “Fine. Give me a drill.” The rest is evident.) This image is best viewed from the far side of the room — forcing us into reverence — where the size and effect can be understood. The figures are caught in Bernini-inspired ecstasy, necks thrust forward, lips parted in religious orgasm that if not for the veils would evoke something much more sexual. Is this a miracle discovered in architectural residue, or a window for inviting voyeurism?

It’s probably easiest to see all these themes converge in the stunning “I’m on a long way.” In this large drawing, two weathered hands hold the face of a young man who appears caught in the important moment when suffering transmutes to wisdom. His closed eyes are white-hot in the black-and-grey fog, lit as if by a direct beam from heaven. Any features, wrinkles, and textures disappear from the surface of the face of the light. Intimacy is captured in the aged hands, in the thumbs pressed over the glowing eyes, in the evocation of the trust, solitude, and heartbreak that inherently belongs to those who love and are loved. And none may be more loved than those who exhibit flaws familiar to our own, the flaws we addressed or ignored on our individual paths to wisdom and experience.

The term “losing one’s head” is traditionally seen as a criticism of lunacy and irrational thinking. But what if the head is all that remains, smiling broadly atop a pile of mulch and glitter? Then, this could signify that rational thinking is the only kind that exists, and a pile of sparkling garden fodder is — in an irrational, perhaps even ungoverned universe — as good a place as any to mull over immortality. Toward the end of my viewing, I squatted down to meet the bodiless “Carry smile” budding out of the glitter-mulch pile. It grinned sleepily, dopily, perhaps understanding there is some pleasure that only comes when we lose our heads.

On view through April 7, 2018 during regular gallery hours, from noon to 5 p.m. on Thursday, Friday and Saturday.