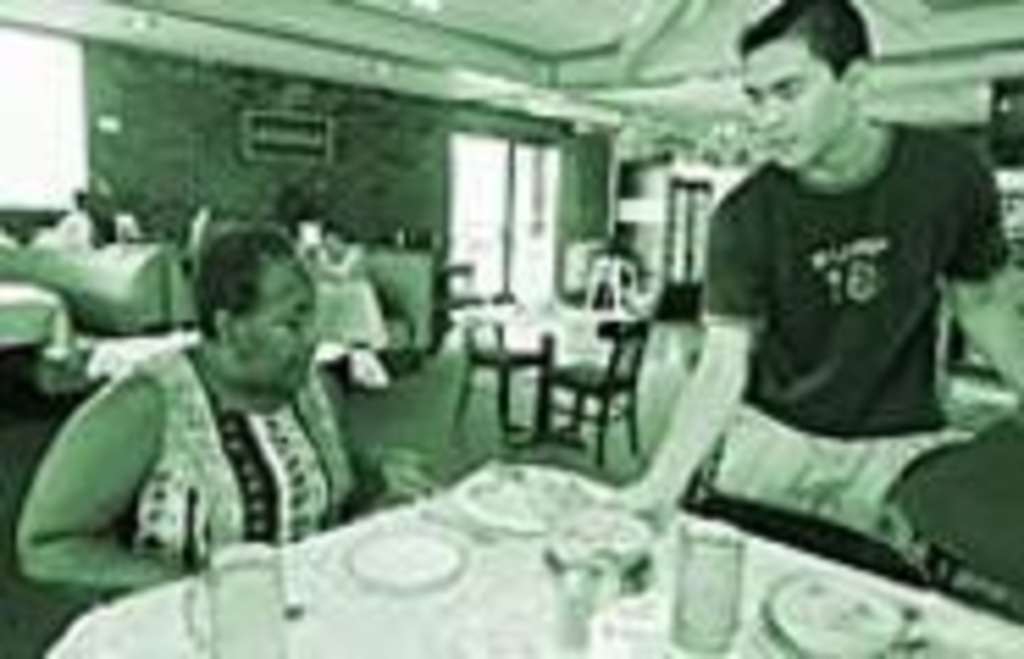 In addition to eating lemon grass noodles and duck noodle soup, there are lots of things to do at Thai 2000. On one visit, for example, we looked at intriguing photos as we flipped through a stack of glossy Thai fashion magazines near our booth. And when the TV set mounted on the ceiling near the kitchen is turned on (as it usually is), some people might want to get up and do a little karaoke to a Thai music video.

“But not very many people do that,” sighed Champagne, one of the restaurant’s willowy young servers. “Sometimes I’m the only one.”

She might have more company if her customers could take a drink or two to ease their inhibitions, but the only alcohol available at this restaurant is beer — and it’s domestic brew at that. The only Champagne in the place is that singing waitress, and there’s none of the native Thai liquor concocted from fermented rice whisky.

For a nondrinker like me, the beverage selection — mostly teas and fruit juices — was fine. But lack of stronger libation left a sour taste in my friend John’s mouth even before he picked up the menu. When the waitress arrived with two water glasses shaped like root-beer mugs, John’s nose began to twitch; when he discovered he couldn’t have a cocktail with our appetizer, his entire face fell. I tried to cheer him up by pointing to a tray of festive drinks passing by. I had visited the restaurant a few days earlier and was eager to try one of the featured “homemade fresh drinks,” blends of fruit and crushed ice served in tall, frosted glasses. They looked like sexy, grown-up versions of Dairy Queen’s beloved Mister Misties. Mimi, another server, brought out a tart lime version for me and a sweeter orange concoction for John. I thought each drink was just the ticket for cooling down the blast-furnace heat of the crushed pepper dipping sauce — flavored with garlic, sugar, and vinegar — that had arrived with the sizzling grilled strips of Tiger Tear Beef ($4.50) and the rubbery white rings of grilled squid steak ($5.99).

But John remained chilly to the concept. “This drink would be great with a shot of vodka in it,” he said. “But then again, it might seem too surreal to be drinking alcohol in this building.”

Located in a former McDonald’s, Thai 2000 is a metaphor for the changing face of Johnson County: an all-American hamburger franchise reborn as a little bit of Thailand (for a while in between, the building housed a fast-food Chinese joint). On each of my visits, Thai and Chinese natives and apple-cheeked Midwesterners were all happily sipping noodle soups and gobbling down plates of basil fried rice. If the karaoke machine hadn’t played one high-pitched ballad after another, “We Are the World” might have been a nice touch.

The restaurant specializes in the culinary styles of Thailand and its northern neighbor, Laos. Glass blocks frame the restaurant’s bustling open kitchen, where the aroma of shrimp paste and curry, pungent garlic, chilies, ginger, citrusy lemon grass, and coriander waft out like exotic incense. A couple of vestiges of the original McDonald’s decor remain here and there (a long plastic fixture above the kitchen once exhibited prices for Happy Meals and Egg McMuffins, and there’s still a drive-through window), but the Thai 2000 owners have done their best to put a more Siamese spin on the scene. They’ve filled it with teak boats piled with fake fruit, little brass temples, and silk parasols. And in addition to putting up purple awnings outside, they’ve splashed the restaurant’s tidy dining room with lavender vinyl tablecloths and real cloth violet-colored napkins, leading me to wonder whether some nationalistic connection to the color existed. But Thailand’s flag isn’t purple — it’s red, white, and blue, perfect colors for a former McDonald’s.

John was lost in the nonalcoholic purple haze. “It’s a veritable cacophony of visual styles,” he said. “Maybe if they served alcohol, it would look more interesting.”

To get John’s mind off his misery, I motioned for Mimi to take our dinner order. After my earlier visit, I felt like an expert at handling this restaurant’s oddball menu, which offers few descriptions of its 80 or so dishes and is even occasionally misleading. The Vegetable Fresh Soft Rolls ($3.95), for example, are soft rice paper wrappers stuffed with chopped vegetables, rice noodles, and cilantro — and shrimp.

On that earlier visit, I had asked Champagne about the difference between Yum-Yum and Som-Tum.

“Yum-Yum is a salad,” she said. “Sometimes with meat or squid or noodles, served on lettuce with a sour and spicy sauce. Som-Tum is a salad made with fresh papaya.” Thai 2000 serves eight variations on the Yum-Yum theme, including a couple that Champagne couldn’t explain, such as Yum Woon-Sen (“I’m not sure,” she said, “because no one ever orders it”); I later discovered it’s a noodle and lettuce salad.

The Som-Tum papaya salad ($5.25) isn’t made with sweet, ripe papaya; it’s made with the firmer green fruit, chopped and mixed with hot peppers and lime and doused with a tangy, potent nam pla, a fermented fish sauce. There’s a sweeter, mildly hot Thai style, dressed up with chopped peanuts and green beans, or the Laos-style Som-Tum, which was fishier (with a different sauce) and so fiery it left us grabbing our water.

The servers do their best to describe the dishes that get no description on the menu or have strange ones, such as the Phad Gra-Pawn: “Sautéed your flavors meat with fresh basil leaves and chili and pepper.” Phad Gra-Pawn ($7.95) isn’t a variation of the popular noodle dish pad thai but a plate of highly seasoned meat (beef, chicken, or pork) sautéed with crunchy vegetables and hot peppers and eaten with rice. A bowl of cooked pork in a paprika-colored pool of red curry sauce ($5.95) looks as if it might permanently burn the tongue, but it’s actually mellow, luscious, and addictively tasty. It seemed to have a bit more burn than the green or yellow curry dishes, but all of them manage to be more seductively spicy than aggressively hot.

A plate of lemon grass noodles ($5.95) topped with fresh mint and peanuts was surrounded by little piles of vegetables that we blended into the pile of soft rice noodles for flavor and texture: chopped cucumber, carrots, and bean sprouts. This dish was soft and soothing, a rare quiet note in a menu offering a raucous symphony of flavors.

And when we needed to relax after such a spicy dinner, we ignored the menu, which lists three kinds of cake in addition to a house special and ice cream. “We don’t have cake,” Mimi announced, “but tonight we have baked custard and a special dessert: mango sticky rice.”

I would have performed a karaoke number before I’d dip a fork into mango sticky rice, but I was thrilled with the little square of delicately flavored custard ($2.50) and, even better, a tall glass of light coconut ice cream ($2.50) that tasted as if it had been scooped out of a shell. I also tried the mango, taro, and durian ice creams, although none had the pizazz of the coconut version.

“This is what should happen to all McDonald’s restaurants,” my friend Sally said when I took her to Thai 2000 for lunch (the lunch and dinner menu are the same). “That would change the way people eat in America.”

And by the time John and I walked out to my car after dinner, the food had won him over. We agreed that while the ambience needed work, the cuisine was sensational. “What happens next year?” he wondered. “Will the restaurant change its name to Thai 2001?”

I hope it doesn’t change a thing.