My Name Is Mud 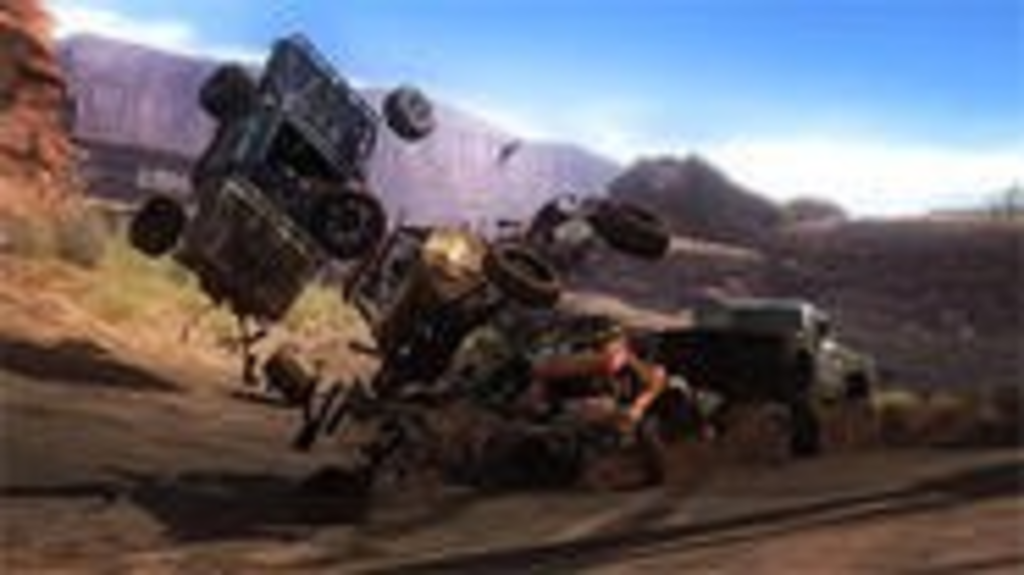 In the poem “In Just-,” E.E. Cummings described the world as “mud-luscious” and “puddle-wonderful” — words so perfectly befitting MotorStorm‘s gorgeously sloppy off-road hijinks, the game’s designers probably had them tacked up on a wall somewhere. And had Cummings paid $60 for MotorStorm, the verbally inventive (and upper-case averse) poet probably would have this to say: “i think i just got bent over.”

MotorStorm is set in the dusty hills, deep crevices, and sheer cliffs of Monument Valley, Arizona, where adrenaline junkies and lunatics engage in a no-rules, mixed-vehicle rally race in between building bonfires and listening to bad rock music.

It’s a great idea for a racing game — especially the mixed-vehicle part. Dune buggies, ATVs, and trucks (plus a few others) all race together, each with their own qualities to consider. Motorcycles are nimble, but they’re also exceptionally easy to wreck; semis aren’t the fastest, but once they get going, they plow through just about anything.

With this bizarre smorgasbord of vehicles sharing the same track, chaos naturally ensues: Trucks roll over motorcycles, semis ram buggies into mountainsides, and stock cars lose traction and slip off cliffs. To quote an ill-fated Persian ambassador in 300: “This is madness!”

And it’s all rendered in PlayStation 3’s best graphics so far. Gobs of mud splatter and spit from behind vehicles, and the track is gorgeously carved up by tire treads as the race goes on. Wrecked vehicles disintegrate spectacularly into clouds of transaxles and fenders. If you’re looking for a showcase game to dazzle friends with, MotorStorm is the one to get.

To say MotorStorm is light on options doesn’t quite paint the picture; it actually lacks almost every feature players have come to expect from a racing game. There is no offline multiplayer — so if you want to race your roommate, he needs to buy his own PS3, his own copy of the game, and meet you online.

There’s no mode to practice driving a certain vehicle or track — you learn on the job, sport. That means no time-trial mode either, another racing-game staple that’s inexplicably absent.

Even odder, there are no replays after a race — a baffling omission, since a game full of insane driving and magnificent crashes just begs for some sort of instant replay, especially since the PS3 has a hard drive to save them.

There isn’t even a speedometer. In a racing game, there’s no speedometer. Why? Who knows — maybe speedometers aren’t rock and roll enough for MotorStorm, or some such bullshit.

So you’re left with two options: Race in the tournament, or go online. Online racing is pretty good, with almost no lag and more enjoyable competition than the game’s overly aggressive, cheap computer opponents — but if you don’t have online, you’re denied even that.

Only about a week after MotorStorm’s release, its developers shamelessly announced they were working on downloadable content — including, yes, a time-trial mode. Will it cost money? Does it matter? Sure — paying for content that should have been on the $60 disc to begin with is outrageous. But even if it’s free, it’s no help to offline gamers.