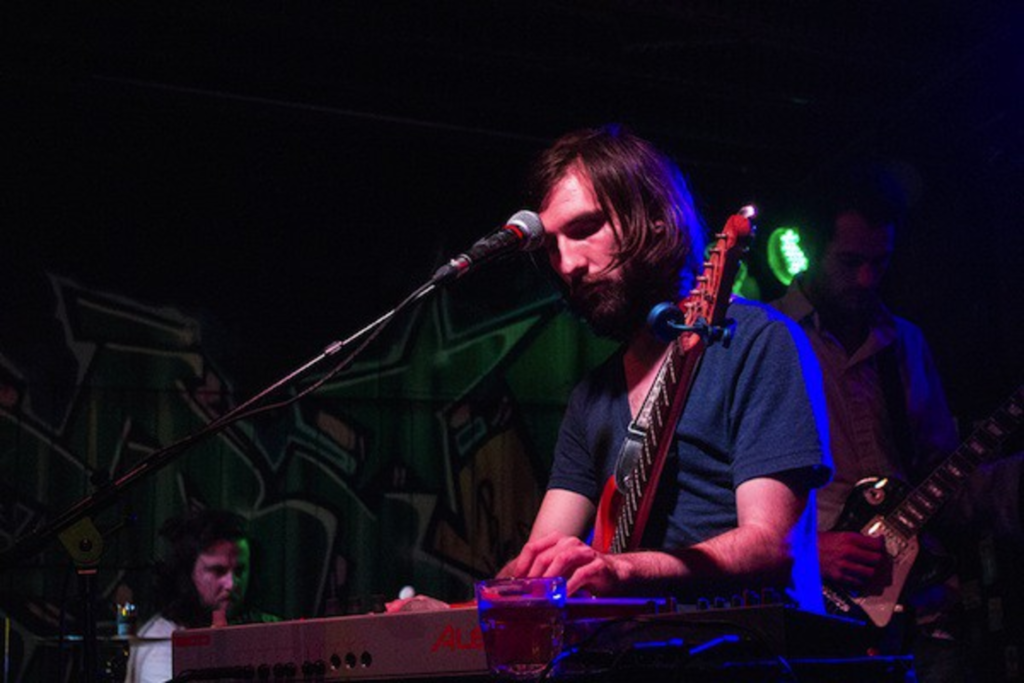 Above all else, Jordan Lee – who performs as Mutual Benefit – is gentle. The singer-songwriter’s 2013 album, Love’s Crushing Diamond, is a gorgeously crafted collection of fragile songs recorded in bedrooms across the country. Now playing as a four-piece fronted by Lee, Mutual Benefit brought that quiet energy to a small crowd at the Riot Room’s outdoor stage last night, fighting against the roar of late night Westport.

The group opened with a crescendoed soundscape of looping guitar sounds, synths, accordion and electronic beds building into “Strong River.” Off the bat, it was Mutual Benefit at its best. The band’s two-month-long tour chops were prevalent as they worked as a cohesive unit, building sounds in slowly and dramatically. Throughout the show these builds were highlights, often on the back of the percussionist who expertly added in light cymbal hits, chimes, electronic beds and other details that kept songs moving.

“Strong River” fed right into single “Golden Wake” and Lee’s voice shone above the din. He’s got a voice that’s honest – sometimes meek and sometimes defiant, but always true in its emotions. This complements Lee’s songwriting. He paints with broad strokes on love and mortality, yet it doesn’t seem overwrought or insincere.

From start to finish, the set maintained that honesty. While staying true to the albums, Mutual Benefit’s live show brought an extra presence that’s lacking in the bedroom recordings. The drums were live and driving; the guitars had a warm, almost Texas tone (a nod, perhaps, to Lee’s home state). Songs like “Animal Death Mask” and “Advanced Falconry” showed the band’s knack for complexity. The group built layers and layers of sound that would tilt from muddy to well defined, hitting the punches with a road-worn precision.

If there was a downside to the gentle, soothing tunes of Mutual Benefit, it was in the excess. The hour-plus set of 14 songs started to drag towards the end. The fresh air had people mostly engaged, but the lulling nature of Lee’s songwriting kept the mood just slightly north of lethargic. 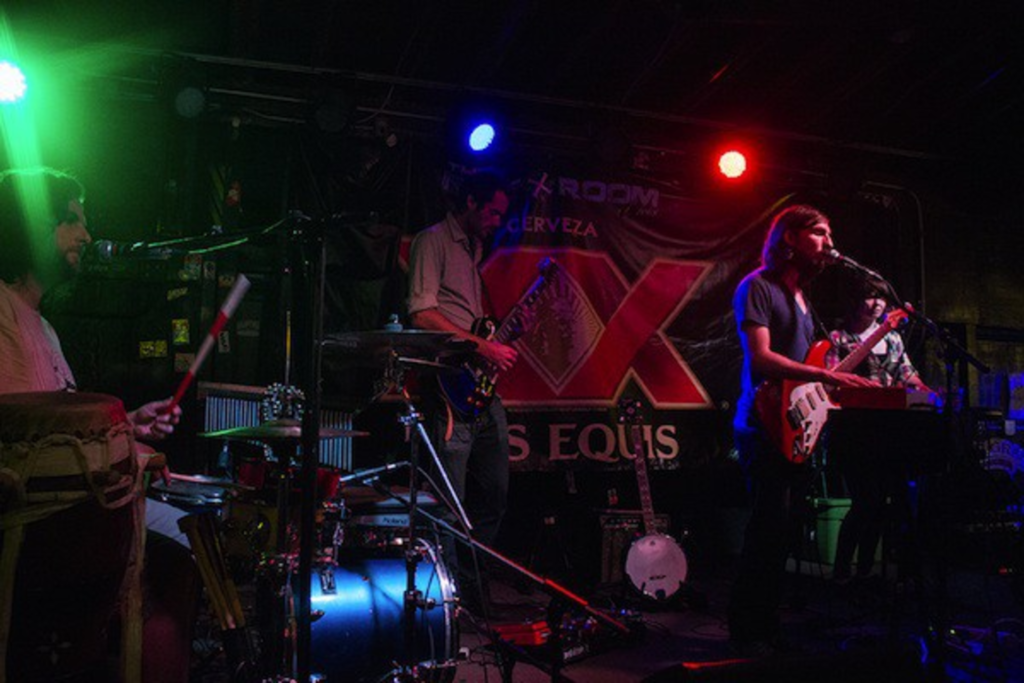 The band also had to fight their way through the onslaught of a noisy Saturday night in a busy neighborhood. The indoor show at the Riot Room was an unfortunate match of speed metal that overpowered Mutual Benefit every time a smoker opened the door to get outside. Next door, Joe Buck came through loud and clear calling the Royals’ game in-between (and sometimes on top of) songs.

The band took the distractions with a chuckle, though. Lee dedicated “Stargazer” to “really great sound installation” and asked the crowd to keep each other up to date on the score (in between songs, not during).

And despite those distractions, the set prevailed being outside under the drowned-out stars. The crisp air and breeze blended well with Mutual Benefit’s organic, warm tones – giving the whole affair a songs-around-the-campfire feel. Paired with a sparse, intimate crowd of around 30 concertgoers, that gave the whole thing a comfortable vibe.

The set capped with an uplifting cover of the traditional “He’s A Mighty Good Leader,” most known in modern times off of Beck’s One Foot In The Grave. The song was a fitting closer that showcased everything Mutual Benefit excels at: bouncy pop melodies, intricately interweaving elements and an all the honesty and soul wrapped into Lee’s voice. Everything you could ask for on a gorgeous autumn night, even with all the distractions.

Leftovers: Local opener Morningglories shredded out a rockin’ (though ultimately ill-paired) set. Touring opener Suno Deko provided an exceptional – though short – set of pop tunes, playing off the one-man-band looping party better than almost anyone I’ve seen. That matched with his hook-heavy melodies and precise guitar work won the crowd over instantaneously.