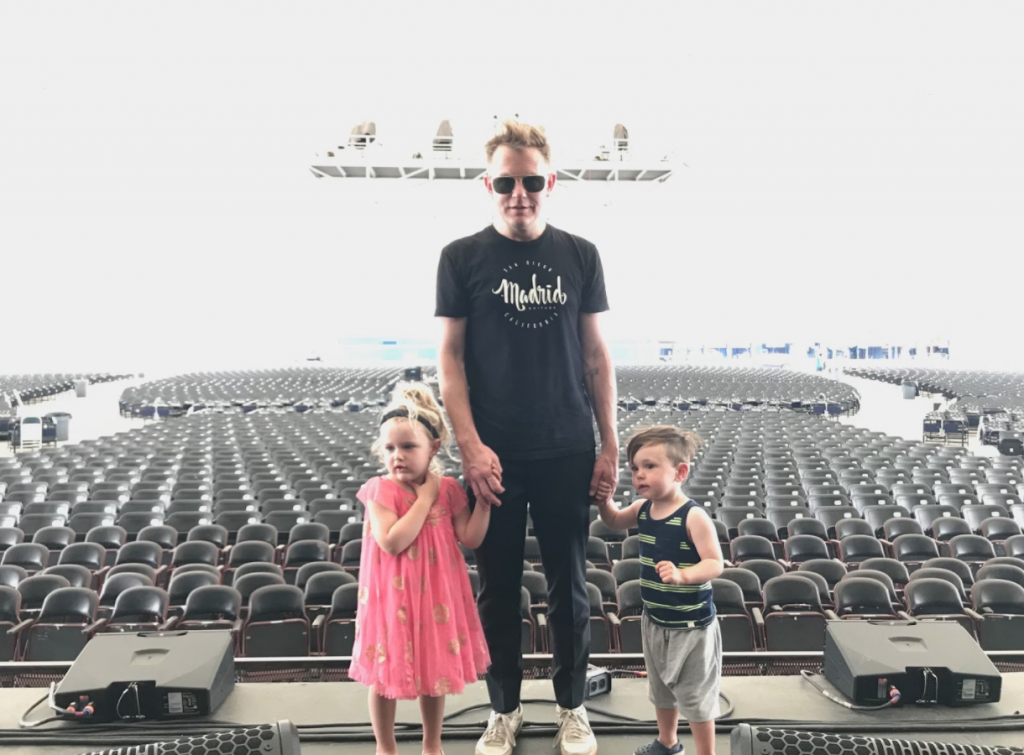 Mary, Rob, and Julian Pope on stage before a Spoon show in Boston, 2018. // Courtesy Rob Pope

The Get Up Kids will be playing their first live show post-pandemic on September 17 at Lemonade Park. They’ve also got a new five-song EP is in the works.

The Pitch: You played bass in Spoon for how long?

I needed a break. I needed a minute. I’ve been on tour more than half my life—my entire adult life, and just couldn’t do that anymore. To figure out some sort of big life change certainly wasn’t easy and I thought about that for a long time. I remember talking to you about it over ramen in London.

I remember that too.

It was starting to take a toll on my relationship, my mental health, and my parenting. Spoon was touring an insane amount. I  was starting to lose some of my identity—who I was and who I wanted to be. A lot of that had to do with parenting, being available and supportive of my wife, my 2-year-old Julian, and my 3-year-old Mary. Being gone 250 days out of the year then coming home and adjusting from being awake until 3 a.m. every night then, at home, having Mary peel my eyelids open at 6 a.m.—those are hard adjustments—over and over and over.

Is Spoon mad at you?

No. They love me! I still talk to those guys a lot. There are moments that I do miss playing in that band—Spoon is really good! But it never completely felt like my band. It’s a bit more of a dictatorship than The Get Up Kids, the band that I grew up in. That band feels like my band.

The Get Up Kids—how’s that going?

It’s going really well. Now that I’ve moved back to Lawrence, all of us are in the same city. We get so much more work done! We’re busy. The profit margins on rock and roll are not that great. You gotta work.

Yeah, the hustle is for real. Dustin Kinsey is in the band, we’re working on a bunch of new songs, and the Livestreams have been fun to do—to go back and rehash. 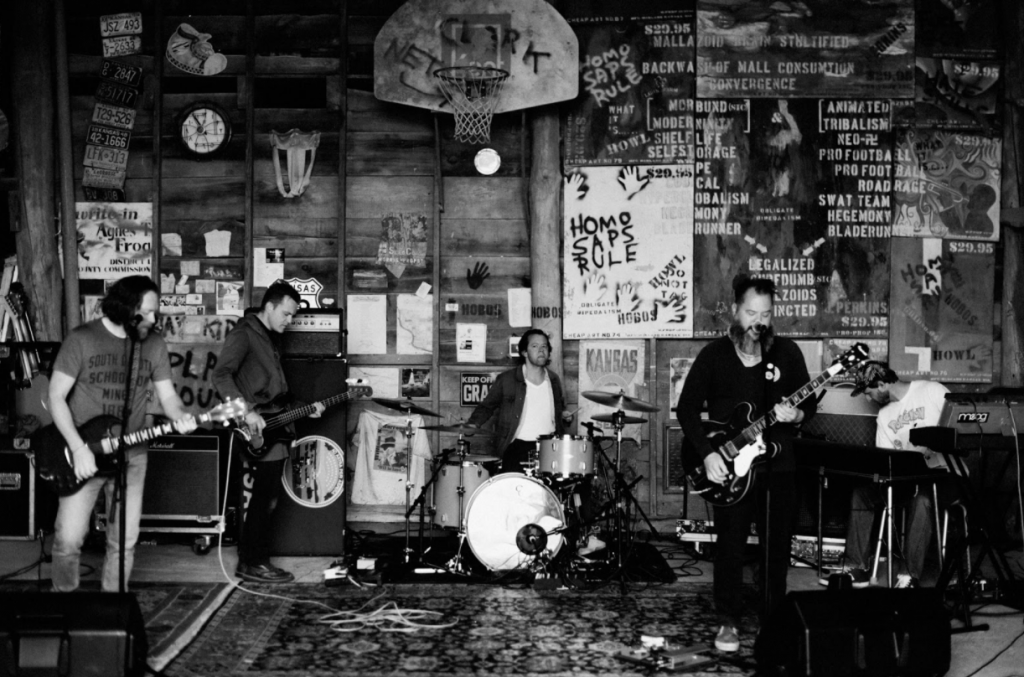 The Get Up Kids during their “Four Minute Mile” livestream, 2021. // Photo by Shawn Brackbill

You’ll go on tour with The Get Up Kids again, right?

Is there something about touring with people you know so well and your brother that makes touring feel a little more like home? You raised each other.

We also know how to really piss each other off. Each of us knows exactly the right buttons to push when we need to get a rise out of someone. All of us are ego-driven weird people, creative types. And sometimes those are volatile relationships, but right now we get along great!

Outside of the live streams we’ve been doing, we’re going to be recording a five-song EP. I’m going to be engineering it. The songs are written and are really good. Peter Katis, who produced our last record, will produce and mix it remotely in Connecticut. But we’ll record it here, in a basement.

Oh, yeah. It comes up every time I see my dad. Almost like touring was some kind of learned behavior. Sort of like, Dad traveled all the time, I guess that’s what I’ve got to do? That being said, I can’t totally Freud that one. Dad would come home on the weekends and be grumpy. “What the hell’s going on in this house!” He’d grab the vacuum. I’ve started to understand him.

Your kids seem pretty honest. Do they like The Get Up Kids?

They’re into pop radio. I’m pretty honest with my kids when we’re driving around. If there’s a Taylor Swift song on, I’ll say I don’t like this one. They’ll say, “What?!” because they’re in the back singing it. But there’s an Olivia Rodrigo song that just recently came out, one of her new singles, and Mary and I look at each other and say, “That’s good.” Hear those drums? That’s smart stuff.  I’m certainly never going to force them to listen to Dad’s band. They do like watching it though. They don’t know Uncle Ryan as a drummer, although he did build them a drum kit.

What a good uncle. He is a particularly fun drummer to watch. Isn’t he ambidextrous?

Yes, but they don’t comprehend that. They just wonder what he’s doing. “Uncle Ryan? How does he do that?” He gets to sit back there and hit stuff.

Even after I moved to Seattle, then Brooklyn, then Massachusetts, coming back here has been awesome. Secretly for years and years, I’ve hoped that Lindsay, my wife, would one day want to move to Kansas. And that finally happened last year. I never wanted to make it about me or make it my decision because, due to my touring schedule, it would have been really selfish for me to be gone half the year and then move us to where I want to live. She loves it here, which makes everything much easier. Lawrence and KC have always felt like home.

You’re a well-mannered nomad no more. You clicked your heels together!

Lawrence is a great little bubble of culture. When I was touring all the time, I would get home and I didn’t have any other job—the businesses I own were not where I lived. I’m way more active in The Pig, clearly. (He gestures to the bar behind him on 9th Street in downtown Lawrence.) Up until a few weeks ago, I was a waiter, essentially. All of our staff were serving tables—working twice as hard for half as much money. But that’s coming around now. Douglas County is doing a great job of vaccinating people. 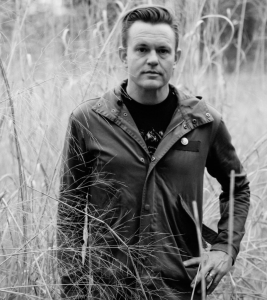 That’s so wild. I’ve never seen you work at anything except being a musician.

Now I’m bartending all the time. I like it. Lindsay and I also started a screen printing company called Pocket Studio Press. Now that I’m back in Lawrence, I’m busier than I want to be! Now I’m back to wondering if I’m not a good parent again.

I was wondering about that. When you would get back from tour, you would have all this concentrated time with your children that most parents frankly don’t get unless they take a vacation. But now you’re a regular working dad.

What’s different is that, no matter what, I make it home and go to sleep, wake up, and I’m there. The daily routine of it is the big change—the stability of having a dad around. Lindsay, the other day, asked Julian and Mary, “Do you remember when dad used to be gone all the time?” And neither of them did!

Yeah. Lindsay and I were both like, “Are you kidding me?” That whole time was pretty traumatic for us. This stability is more valuable than big, long concentrated periods of time.

Photos: Cradle of Filth at the Uptown