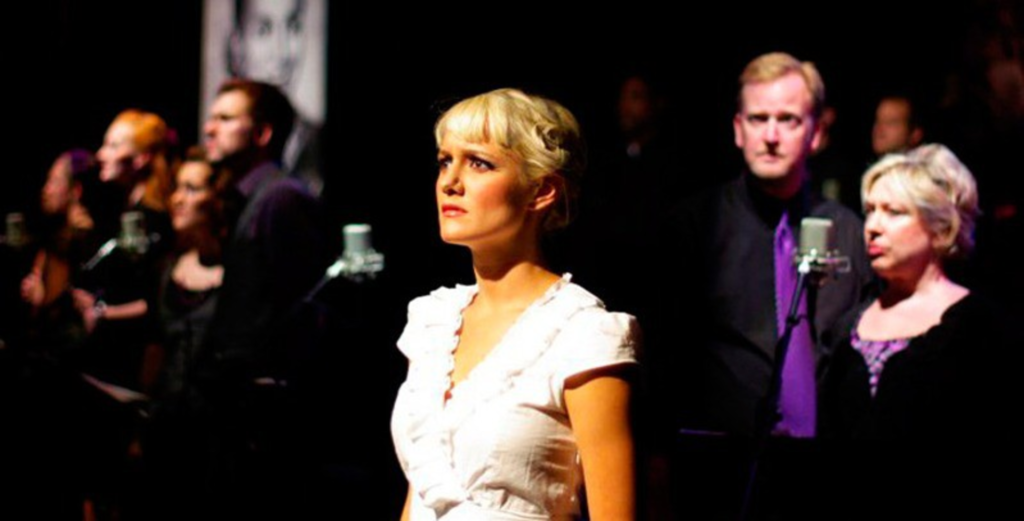 Katie Karel singing the lead in Evita, Musi­cal Theater Heritage’s season opener, seemed one of those self-evident announcements, like Friday following Thursday and Lady Gaga modeling an outrageous outfit in her next video. Like the Eva Perón portrayed in Andrew Lloyd Webber and Tim Rice’s legendary musical, Karel commands preternatural knock-em-dead brass and star power. She also has a voice that can pulverize concrete, making the musical demands of the role a walk in the park.

The question was whether Karel could hold herself back enough to make the quieter passages plausible, and convey the moral and psychological ambiguities that make Evita more than just a portrait of monstrosity. The news is that Karel can and does. She tamps her delivery at the necessary moments to a crystalline peal, the better to unleash her full belt for the rest. With spirited support from Tim Scott as Che, she carries this stellar production with ease.

Whatever you think of Andrew Lloyd Webber and his musicals, he knows how to write a tune, and Evita is full of gorgeous, hooky songs. The unusually curvaceous melodies and spiky harmonies colonize your mind and make you burst into song for weeks after seeing the show. On the key numbers, especially “Don’t Cry for Me,” “I’d Be Surprisingly Good for You” and “Eva’s Final Broadcast,” Karel is unstoppable.

Karel and Scott make ace villains, so it should come as no surprise that this is a hard-edged production. Karel’s Evita is unapologetically calculating from the start, without a scintilla of dewy-eyed girlishness. When she approaches Juan Perón, it’s more business proposition than seduction. And Scott’s Che, despite his safari-military garb, is no disillusioned visionary. He’s pure sardonic gadfly.

Sarah Crawford’s direction of this concert rendition teems with clever theatrical flourishes and staging shenanigans, but Scott travels in a fourth dimension all his own, leaping forcefully in and out of scenes. I find Scott’s vocal instrument thin, especially against Karel’s firepower, but he sells his songs completely, committing as much with his mind as with his alert, restless body. His brain just chugs faster per minute than most people’s. Crawford makes the most of the tension between Che and the audience. We want only to be in love with Evita, to mourn her and sink into the worshipful cult, along with the rest of Argentina, but Che keeps goading us to think.

Perón is admittedly a small part, but there’s never a second of chemistry between the stolid Christopher Sanders and spark plug Karel. Sanders has a booming baritone, but his smug, humorless Perón is barely serviceable. The lyrics are there, but we don’t really see Perón lose his heart to Evita or understand how he becomes increasingly dependent on her. No wonder there’s very little heartbreak on his big number, “She Is a Diamond.”

Aubrey Ireland, as Perón’s mistress, has a very pretty voice, but her “Another Suitcase in Another Hall,” a plum solo, comes out immature and whiny. Though the lyrics travel emotional distances with each verse, Ireland stays in the same place, each chorus no different from the last. What should build in poignancy finally just grates. By the fourth time she repeats the refrain What happens now, she sounds like a preschooler wanting to know when snack time is, not a defeated, resigned woman questioning her way of life.

Musical Theater Heritage’s concert stagings are usually costumed just enough to be evocative, and the approach generally works well. Here Karel wears two contemporary dresses that somewhat suggest the period and does the rest with coif and cosmetics. Most of the women in this production do likewise. But what is up with the men? I’m pretty sure one was wearing a worn, baggy polo shirt, and the droopy posture of the generals would land them in the stockade. As for Perón, $4 worth of Brylcreem and a period-appropriate necktie would have gone an awfully long way. Effort, gentlemen, effort!

But the men are just the men, and when Karel is onstage, you don’t watch anyone else. This show is all about Evita, and Karel carries the part perfectly. She’s magnetic and then some, and you miss her when she’s away.

The orchestra, under keyboardist Jakob Wozniak, may be the best musical-theater ensemble in town this year. This is by far the most gorgeous and intelligent orchestration of Evita I’ve heard, rocking and contemporary in sound while pushing the full dissonance of Webber’s score. Brad Athey’s violin, Tim Thomas’ trumpet, Brian Wilson’s bass and Joe Levens’ guitar are especially ravishing. Watching this production, I often found myself wanting to close my eyes and simply enjoy the music.