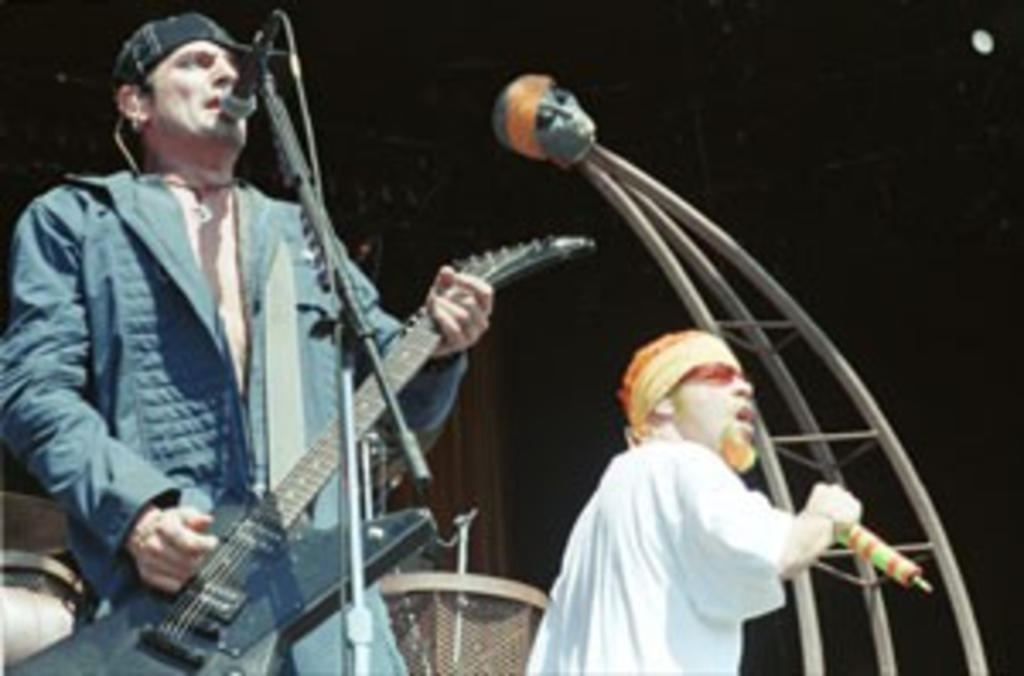 When drummer Cody Willis punctuated the climax of one impossibly heavy Murder City Devils tune by setting his sticks ablaze as he emphatically pounded his kit, it was easy to forget this was the cramped, overheated, stageless Replay Lounge and not some grander venue that regularly dispenses such rock-star glory. However, when chain-smoking keyboardist Leslie Hardy visibly registered her skepticism about holding her lighted cigarette near a flammable liquid, then excused herself from the next three songs just in case, the reality of the surroundings resurfaced. After that, it was no surprise when one fan grasped guitarist Dann Gallucci in a loose headlock and shoved a straw connected to a mystery liquid in his mouth, or when would-be vocalists shouted singer Spencer Moody’s words right back into his face with nearly equal amplification. Some bands as acclaimed as the Devils might bristle at such contact, especially given that the group has toured arenas with Pearl Jam. Then again, Moody has chastised wallflower fans in his lyrics, so perhaps such exuberant crowd participation actually put the band in its element.

Moody had no need for heckling on this night, as few in the packed venue were merely standing still. Instead, people swayed and jiggled as the Devils delivered adrenalized versions of the dark concoctions from their three full-length releases. On the newer tunes, such as the Stooges-style “Press Gang,” Hardy’s organ added a unique touch to the Devils’ incendiary two-guitar attack. At other times, Hardy smoked and watched as the group thrashed through powerful keys-free rockers. Moody paced erratically across the floor, the guitarists dropped to their knees mid-riff, and Willis pummeled his drums with dramatic fury. The Devils poured gasoline on the already smoldering embers of their impressive recorded efforts, resulting in an intimidating bonfire that invited listeners to bask in its glowing heat.

Nearly as entertaining, if not quite as musically adventurous, were the Yo-Yos, who played raw, catchy Ramonesy numbers with titles such as “C’mon Everybody.” The English group’s members made a bold first move with the blasphemous request (later granted) that the Replay’s famous pinball machines be turned off during its set, but the Yo-Yos won back the hearts of even die-hard button-pushers with clever crowd banter (“Be quiet in the cheap seats,” one Yo-Yo jokingly implored), amusing song introductions (after dedicating “Sunshine Girl” to himself, another Yo-Yo explained, “I’m not really a girl, as you might have noticed from the bulge in my trousers”), and memorable melodies (especially on the single “Time of Your Life”). The Yo-Yos rocked, with plenty of driving power chords and wailing solos, but they also provided necessary respite from the intensity that was to follow, as two Devils-style sets in a row might have drained the energy of even the most boisterous fans.